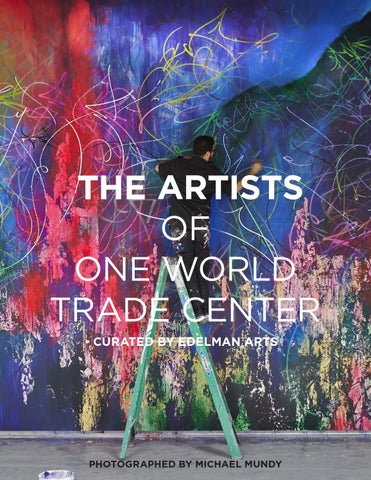 THE ARTISTS OF ONE WORLD TRADE CENTER CURATED BY EDELMAN ARTS

THE ARTISTS OF ONE WORLD TRADE CENTER New York, NY — Edelman Arts in collaboration with The Durst Organization and The Port Authority of NY & NJ presents a public art collection curated for One World Trade Center. One World Trade Center marks the beginning of a new future in the landscape of New York architecture in itself, but also in collaboration with the spirit of art and with it, the diversity of people in this great city. The collection includes a monumental painting by José Parlá, two paintings by Doug Argue, two paintings by Fritz Bultman, a group of seven works on canvas by Greg Goldberg, and a towering sculpture by Bryan Hunt. The collection will remain on view in the North, South, and Sixty Fourth floor lobbies of One World Trade Center, where the installations will be enjoyed by a projected 30,000 visitors per day.

“The role of the art in One World Trade Center is to create life within the building. It’s not just about white marble walls, it’s about spirit and life within. From the building’s point of view, it’s about branding, and something that is beyond the simple walls.” “I hope we have accomplished our most important goal in the partnership formed by the Durst Organization, Edelman Arts, and these special artists—the incentive to raise heads and eyes from diverting handhelds, to look at the art, to respond, and to be elevated from the mundane.” — Asher Edelman

ONE: Union of the Senses, 2014 This painting symbolizes a synthesis and unity between José, the city, and 1 WTC. It is inspired by the energy of NYC. The lines and colors represent the diversity of the cultures in New York while the textures and layers represent the resilience of its people. “With the title, I wanted to convey unity among all people. I wanted to use as many colors as possible. The diversity of color represents people.” —José Parlá

José Parlá’s 90 foot mural, his largest yet, and the largest painting to be mounted in any public space in New York City. Jose lives and works in Brooklyn.  His paintings both large and small are widely collected both privately and institutionally, including murals at Barclay’s Center and the Brooklyn Academy of Music.

Isotropic, 2009-2013 In Isotropic, Argue incorporates computer manipulated text, which is appropriated from literature such as Moby Dick. The text is stretched on the canvas until itâ&#x20AC;&#x2122;s no longer decipherable.

Randomly Placed Exact Percentages and Isotropic, two paintings which flank the lobby’s front desk are evocative of the universe, exploring themes of science, mathematics, and language. “The paintings are about the possibilities of new combinations that expand the idea of how things can change in an infinite number of possible ways. I hope people like the paintings and see something different in them every time they look at them.” ­— Doug Argue

Doug Argue’s current work expresses a sense of the infinite by fusing elements of the visual arts, science, and language, often in mural-sized works. He explores the tradition of painting while employing contemporary concepts of realism, abstraction, and expressionism. Recently, he has incorporated computer-manipulated forms (notably individual letters) in many of his paintings. Earlier figurative and representational works have included highly detailed and often monumentally-scaled depictions of leaves, cock’s combs, books and other subjects that, at times, edge towards the conceptual. Throughout his career, Argue has combined highly disciplined control and investigation of material with expansive and dynamic compositions that reflect his fascination with our ongoing evolution in the fields of art, language, and culture. Argue’s work is found in the collections of the Minneapolis Institute of Arts, Walker Art Center, Frederick R. Weisman Art Museum, and numerous corporate and important private collections. He has been the subject of solo exhibitions at the Richard Heller Gallery, Santa Monica; Edelman Arts, New York, Haunch of Venison, New York; and Associated American Artists, New York; among others. He has a solo exhibition to take place in Venice during the 2015 Venice Biennale. Argue was recipient of the Rome Prize (1977) and of a Pollock-Krasner Foundation grant (1995) among other awards. He attended Bemidji State University, Bemidji, MN and the University of Minnesota, Minneapolis, MN and was born in St. Paul, MN. He lives with his wife in New York City.

Axis Mundi is a totem, a form in perpetual balance, a structure that holds light and air. Like Bryanâ&#x20AC;&#x2122;s early airships, it explores the metaphysical presence of floating and orbiting forms.

Bryan Hunt (b. 1947) has a formidable career as a modernist sculptor and painter with works acquired by over 50 public collections around the world, locally—the Museum of Modern Art, the Whitney Museum, the Guggenheim and the Metropolitan Museum and is included in many distinguished private collections around the world. Hunt attended the Whitney’s Independent Study Program in 1972, had his first solo exhibition at Jack Glenn Gallery in Newport Beach in 1975, and soon after at the Clocktower in New York City. Hunt’s first solo show in Europe, organized by artist James Lee Byars, was Empire State, Phobos, Universal Joint at the Palais des Beaux Arts in Brussels. In 1978 Hunt was included in the Solomon R. Guggenheim Museum’s “Young American Artists.” He was in the Whitney Museum Biennials in 1979, 1981, and 1985, and was featured at the 1980 Venice Biennale.

9 when Edgar Kaufmann, Jr. asked him to create a sculpture for Frank Lloyd Wrightâ&#x20AC;&#x2122;s famous Fallingpublic commissions are on an international scale. His work, Big Twist, was installed in the Museum of ater loaned to the White House Rose Garden. In 1985 the City of Barcelona, Spain commissioned a public artwork, was installed at the Mori building, Shiroyama Trust Tower in Minato, Tokyo. Los Angepire State Building to the Whitney Museum of Art, and it was included in the museumâ&#x20AC;&#x2122;s Centennial City Parks Department commissioned an artwork, Coenties Ship, for Lower Manhattan at the historic nd glass sculpture was awarded the New York City Design Excellence Award (2006). Hunt created Avenue in New York City between 52nd and 57th Streets, in 2011, part of a changing public art outdoor w York, and also maintains a studio in New York City.

As a response to the space and light of the Sky Lobby, Greg Goldberg divided his paintings into three groups each built on a primary color: Red, yellow, and blue. Within the groups, webs of intense color serve as a counterpoint to the brilliant white space surrounding them. While each group has its own color identity and temperature, similar pigments appear in all three, providing a sense of continuity and flow.

Greg Goldberg works in natural light and his paintings develop over a number of months. The color choices are determined by the seasonal quality of light and the evolving structure of the piece. There is a tension between the structural order and the motion of the brushwork. As the paintings evolve, the intensity and density of color becomes a complex web, moving across and into space. The resulting visual history determines the character of each painting.

“My first impression of the 64th-floor sky lobby at 1 WTC was how vast and luminous it was, like being in the clouds, but with a sense of structure. The space seemed to reflect the sky. The wall reserved for my work is separated into several units, parallel to a continuous ribbon of massive north-facing windows. It is my hope that the sensuality, richness and complexity of the color structure are animated by the light and the viewer.” —Greg Goldberg

Gravity of Nightfall 1961 Oil on canvas

Gravity of Nightfall and Blue Triptych-Intrusion Into the Blue are the only works selected for One World Trade Center that is not by a living artist. The bold large-scale oil compositions fill the canvases with intense swirls of blue, red and yellow and drips of paint. They adorn the tower’s north lobby. Bultman was an American first generation Abstract Expressionist artist who died in 1983. He was a member of a group nicknamed The Irascibles alongside his contemporaries Jackson Pollock, Willem de Kooning, and Mark Rothko. The American painter and printmaker Robert Motherwell called him “one of the most splendid, radiant and inspired painters of my generation.”

“Nothing captures the spirit of the Abstract Expressionist moment like the two masterpieces Gravity of Nightfall and Blue Triptych, epic examples of Fritz Bultman’s power and bold technique. The action and the intensely expressive colors take us right back to the moment when New York was the capitol of world art, the place to be if you were a genius of his magnitude and ready to make a major statement of this level of originality.” –Charles Riley

Bultman set himself apart from other Abstract Expressionists with his meticulously organized abstract compositions, use of sculpture, and the adoption of collage as a core practice. Best known for his collages that incorporated prepainted paper into semi-figurative forms and abstract compositions, Bultman drew on years of psychotherapy to explore eroticism, sexual symbolism, and myth.

MICHAEL MUNDY, noted New York photographer, was commissioned to photograph the artists in One World Trade Center. He photographed the art in situ and also visited each of the artists in their studio to capture them at work in their environment before the pieces were installed. “Artists are people I admire the most. They are passionate, creative, and dedicated. If eyes are the windows to the soul, then artists are the windows to our cultural soul. It’s through their eyes that allow us to look deeply within ourselves. When I’m shooting, I am looking to get to know them, to learn who they are, and where they came from. Since the studio is where it happens, it’s a privilege to be invited in and to see the process of their work. I am constantly seeking out the things around the space that influence the artist—their inspiration, references, memorabilia, books, music. I’m looking for connections, things we have in common, things I can take away with me to use. When you spend time around people who are so highly focused in their work you can’t help but be influenced. It sharpens your focus to reset your aim. It’s a purifying process. There’s no difference between visiting an artist or some highly devout monk. Being in the presence of such committed people humbles you and demands for you to be better, to be more honest in your work.” Michael Mundy is the author of the blog, ‘An Afternoon With...’ where he captures the lives and homes of New York’s artists and creatives, and has garnered him innumerable faithful followers. Michael’s photographs have been published in Vogue, W Magazine, Town & County, House & Garden and Wallpaper. Clients also include BCBG, Baker, Calvin Klein, J.Crew, Frette, Grey Goose, Halston, Hervé Leger, Kohler, Morgan Hotel Group and Andre Balazs Hotels.

Copyright notice: This book and all of its contents/images is copyright of Traffic, Inc. ÂŠ 2015. All rights reserved. Any redistribution or reproduction of part or all of the contents for commercial purposes in any form is prohibited and punishable by law. 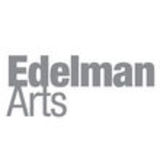 The Artists of One World Trade Center

New York, NY — Edelman Arts in collaboration with The Durst Organization and The Port Authority of NY & NJ presents a public art collection...

The Artists of One World Trade Center

New York, NY — Edelman Arts in collaboration with The Durst Organization and The Port Authority of NY & NJ presents a public art collection...