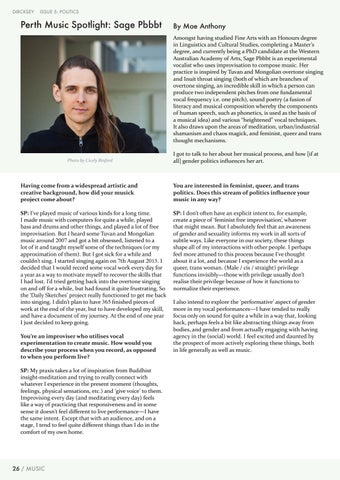 By Mae Anthony Amongst having studied Fine Arts with an Honours degree in Linguistics and Cultural Studies, completing a Master’s degree, and currently being a PhD candidate at the Western Australian Academy of Arts, Sage Pbbbt is an experimental vocalist who uses improvisation to compose music. Her practice is inspired by Tuvan and Mongolian overtone singing and Inuit throat singing (both of which are branches of overtone singing, an incredible skill in which a person can produce two independent pitches from one fundamental vocal frequency i.e. one pitch), sound poetry (a fusion of literacy and musical composition whereby the components of human speech, such as phonetics, is used as the basis of a musical idea) and various “heightened” vocal techniques. It also draws upon the areas of meditation, urban/industrial shamanism and chaos magick, and feminist, queer and trans thought mechanisms.

I got to talk to her about her musical process, and how [if at all] gender politics influences her art.

Having come from a widespread artistic and creative background, how did your musick project come about?

You are interested in feminist, queer, and trans politics. Does this stream of politics influence your music in any way?

SP: I’ve played music of various kinds for a long time. I made music with computers for quite a while, played bass and drums and other things, and played a lot of free improvisation. But I heard some Tuvan and Mongolian music around 2007 and got a bit obsessed, listened to a lot of it and taught myself some of the techniques (or my approximation of them). But I got sick for a while and couldn’t sing. I started singing again on 7th August 2013. I decided that I would record some vocal work every day for a year as a way to motivate myself to recover the skills that I had lost. I’d tried getting back into the overtone singing on and off for a while, but had found it quite frustrating. So the ‘Daily Sketches’ project really functioned to get me back into singing. I didn’t plan to have 365 finished pieces of work at the end of the year, but to have developed my skill, and have a document of my journey. At the end of one year I just decided to keep going.

SP: I don’t often have an explicit intent to, for example, create a piece of ‘feminist free improvisation’, whatever that might mean. But I absolutely feel that an awareness of gender and sexuality informs my work in all sorts of subtle ways. Like everyone in our society, these things shape all of my interactions with other people. I perhaps feel more attuned to this process because I’ve thought about it a lot, and because I experience the world as a queer, trans woman. (Male / cis / straight) privilege functions invisibly—those with privilege usually don’t realise their privilege because of how it functions to normalize their experience.

You’re an improviser who utilises vocal experimentation to create music. How would you describe your process when you record, as opposed to when you perform live? SP: My praxis takes a lot of inspiration from Buddhist insight-meditation and trying to really connect with whatever I experience in the present moment (thoughts, feelings, physical sensations, etc.) and ‘give voice’ to them. Improvising every day (and meditating every day) feels like a way of practicing that responsiveness and in some sense it doesn’t feel different to live performance—I have the same intent. Except that with an audience, and on a stage, I tend to feel quite different things than I do in the comfort of my own home.

I also intend to explore the ‘performative’ aspect of gender more in my vocal performances—I have tended to really focus only on sound for quite a while in a way that, looking back, perhaps feels a bit like abstracting things away from bodies, and gender and from actually engaging with having agency in the (social) world. I feel excited and daunted by the prospect of more actively exploring these things, both in life generally as well as music. 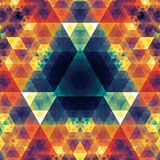