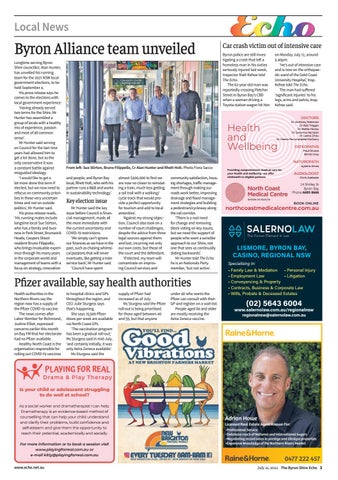 ƷſşŕōōĶëŕĈĕƐĕëŔƖŕưĕĶōĕĎȞ Longtime serving Byron Shire councillor, Alan Hunter, has unveiled his running team for the 2021 NSW local government elections, to be held September 4. His press release says he comes to the elections with local government experience: ‘Having already served two terms for the Shire, Mr Hunter has assembled a group of locals with a healthy mix of experience, passion and most of all common sense’. Mr Hunter said serving on Council for the last nine years had allowed him to get a lot done, but as the only conservative it was a constant battle against misguided ideology. ‘I would like to get a lot more done this term if elected, but we now need to refocus on community priorities in these very uncertain times and not on outside politics’, Mr Hunter said. His press release reads, ‘His running mates include longtime local Sue Stirton, who has a family and business in Park Street, Brunswick Heads; Coopers Shoot resident Bruno Filippello, who brings invaluable experience through his many years in the corporate world and management of teams with a focus on strategy, innovation

bĕƷĕōĕĈƐĶşŕĶƆƆƖĕ Mr Hunter said the key issue before Council is financial management, made all the more immediate with the current uncertainty and COVID-19 restrictions. ‘We simply can’t ignore our finances as we have in the past, such as chasing whimsical passions that will never eventuate, like getting a train service back’, Mr Hunter said. ‘Council have spent

almost $400,000 to find we are now no closer to reinstating a train, much less getting a rail trail with a walking/ cycle track that would provide a perfect opportunity for tourism and add to local amenities’. ‘Against my strong objection, Council also took on a number of court challenges, despite the advice from three legal sources against them: and lost, incurring not only our own costs, but those of the court and the defendant. ‘If elected, my team will concentrate on improving Council services and

community satisfaction, housing shortages, traffic management through making our roads work better, improving drainage and flood management strategies and building a pedestrian/cycleway along the rail corridor. ‘There is a real need for change and removing block voting on key issues, but we need the support of people who want a sensible approach to our Shire, not one that sees us continually sliding backwards’. Mr Hunter told The Echo he is an Nationals Party member, ‘but not active’.

ǕǀĕſëưëĶōëćōĕǽƆëƷĲĕëōƐĲëƖƐĲşſĶƐĶĕƆ Health authorities in the Northern Rivers say the region now has a supply of the Pfizer COVID-19 vaccine. The news comes after Labor Member for Richmond, Justine Elliot, expressed concerns earlier this month on Bay FM that her electorate had no Pfizer available. Healthy North Coast is the organisation responsible for rolling out COVID-19 vaccines

to hospital clinics and GPs throughout the region, and CEO Julie Sturgess says that’s happening. She says 15,500 Pfizer doses per week are available via North Coast GPs. ‘The vaccination program has been a gradual roll-out,’ Ms Sturgess said in mid-July, ‘and certainly initially, it was only Astra Zeneca available’. Ms Sturgess said the

supply of Pfizer had increased as of July. Ms Sturgess said the Pfizer roll-out is being prioritised for those aged between 40 and 59, but that anyone

under 40 who wants the Pfizer can consult with their GP and register on a wait-list. People aged 60 and older are mostly receiving the Astra Zeneca vaccine.

Is your child or adolescent struggling to do well at school? As a social worker and dramatherapist I can help. Dramatherapy is an evidence-based method of counselling that can help your child understand ƏȇƳƬǼƏȸǣǔɵɎǝƺǣȸȵȸȒƫǼƺȅɀًƫɖǣǼƳƬȒȇˡƳƺȇƬƺƏȇƳ self-esteem and give them the opportunity to reach their potential, academically and socially. For more information or to book a session visit www.playingforreal.com.au or e-mail kitty@playingforreal.com.au