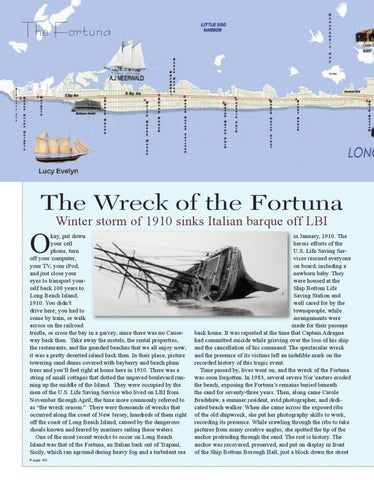 The Wreck of the Fortuna

kay, put down your cell phone, turn off your computer, your TV, your iPod, and just close your eyes to transport yourself back 100 years to Long Beach Island, 1910. You didn’t drive here; you had to come by train, or walk across on the railroad trestle, or cross the bay in a garvey, since there was no Causeway back then. Take away the motels, the rental properties, the restaurants, and the guarded beaches that we all enjoy now; it was a pretty deserted island back then. In their place, picture towering sand dunes covered with bayberry and beach plum trees and you’ll feel right at home here in 1910. There was a string of small cottages that dotted the unpaved boulevard running up the middle of the Island. They were occupied by the men of the U.S. Life Saving Service who lived on LBI from November through April, the time more commonly referred to as “the wreck season.” There were thousands of wrecks that occurred along the coast of New Jersey, hundreds of them right off the coast of Long Beach Island, caused by the dangerous shoals known and feared by mariners sailing these waters. One of the most recent wrecks to occur on Long Beach Island was that of the Fortuna, an Italian bark out of Trapani, Sicily, which ran aground during heavy fog and a turbulent sea Page 40

in January, 1910. The heroic efforts of the U.S. Life Saving Services rescued everyone on board, including a newborn baby. They were housed at the Ship Bottom Life Saving Station and well cared for by the townspeople, while arrangements were made for their passage back home. It was reported at the time that Captain Adragna had committed suicide while grieving over the loss of his ship and the cancellation of his command. The spectacular wreck and the presence of its victims left an indelible mark on the recorded history of this tragic event. Time passed by, lives went on, and the wreck of the Fortuna was soon forgotten. In 1983, several severe Nor’easters eroded the beach, exposing the Fortuna’s remains buried beneath the sand for seventy-three years. Then, along came Carole Bradshaw, a summer resident, avid photographer, and dedicated beach walker. When she came across the exposed ribs of the old shipwreck, she put her photography skills to work, recording its presence. While crawling through the ribs to take pictures from many creative angles, she spotted the tip of the anchor protruding through the sand. The rest is history. The anchor was recovered, preserved, and put on display in front of the Ship Bottom Borough Hall, just a block down the street 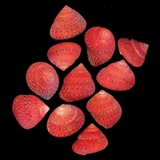