News about celebrating the Creation Time in Germany 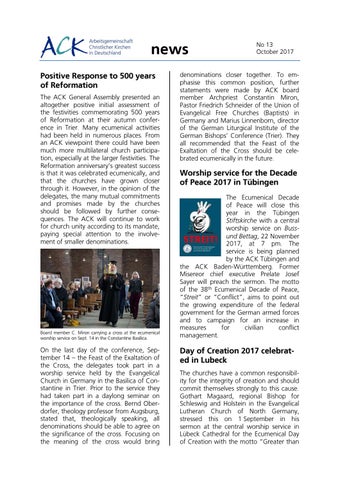 news Positive Response to 500 years of Reformation The ACK General Assembly presented an altogether positive initial assessment of the festivities commemorating 500 years of Reformation at their autumn conference in Trier. Many ecumenical activities had been held in numerous places. From an ACK viewpoint there could have been much more multilateral church participation, especially at the larger festivities. The Reformation anniversary’s greatest success is that it was celebrated ecumenically, and that the churches have grown closer through it. However, in the opinion of the delegates, the many mutual commitments and promises made by the churches should be followed by further consequences. The ACK will continue to work for church unity according to its mandate, paying special attention to the involvement of smaller denominations.

Board member C. Miron carrying a cross at the ecumenical worship service on Sept. 14 in the Constantine Basilica.

On the last day of the conference, September 14 – the Feast of the Exaltation of the Cross, the delegates took part in a worship service held by the Evangelical Church in Germany in the Basilica of Constantine in Trier. Prior to the service they had taken part in a daylong seminar on the importance of the cross. Bernd Oberdorfer, theology professor from Augsburg, stated that, theologically speaking, all denominations should be able to agree on the significance of the cross. Focusing on the meaning of the cross would bring

denominations closer together. To emphasise this common position, further statements were made by ACK board member Archpriest Constantin Miron, Pastor Friedrich Schneider of the Union of Evangelical Free Churches (Baptists) in Germany and Marius Linnenborn, director of the German Liturgical Institute of the German Bishops’ Conference (Trier). They all recommended that the Feast of the Exaltation of the Cross should be celebrated ecumenically in the future.

Worship service for the Decade of Peace 2017 in Tübingen The Ecumenical Decade of Peace will close this year in the Tübingen Stiftskirche with a central worship service on Bussund Bettag, 22 November 2017, at 7 pm. The service is being planned by the ACK Tübingen and the ACK Baden-Württemberg. Former Misereor chief executive Prelate Josef Sayer will preach the sermon. The motto of the 38th Ecumenical Decade of Peace, “Streit” or “Conflict”, aims to point out the growing expenditure of the federal government for the German armed forces and to campaign for an increase in measures for civilian conflict management.

Day of Creation 2017 celebrated in Lubeck The churches have a common responsibility for the integrity of creation and should commit themselves strongly to this cause. Gothart Magaard, regional Bishop for Schleswig and Holstein in the Evangelical Lutheran Church of North Germany, stressed this on 1 September in his sermon at the central worship service in Lübeck Cathedral for the Ecumenical Day of Creation with the motto “Greater than

Heaven and Earth”. At the following ceremony, Professor Nicole C. Karafyllis from the Department of Philosophy at the Institute of Technology in Braunschweig spoke out in favour of retaking a holistic view of creation and restricting the negative consequences of technical development. Next year’s central celebration of the Ecumenical Day of Creation will take place on 7 September 2018 in Starkow.

pamphlets 2.50 €/each, 10+ copies 1.00 €/each, 100+ copies .50 €/each, plus postage.) The Week of Prayer 2018 is based on Exodus 15:1-20 (The song of Moses). To this day, the Caribbean is marked by the aftermath of colonialisation. The church was also involved in this bleak historical chapter. Nonetheless, the enslaved and oppressed inhabitants were able to glean hope and confidence from biblical texts. That is why the Caribbean Christians chose the song of Moses, a song of victory over oppression. The central worship service for Germany will be held on 18 January 2018 at 3 pm in Augsburg (St. Anna).

New Project Coordinator for „Weißt du, w er ich bin?“ ─ Do you know who I am? Following the worship service in the cathedral on the Day of Creation there was a procession to the Muhlenteich.

Week of Prayer 2018 The texts for the Week of Prayer for Christian Unity in 2018 (January 18-25 or in the week before Pentecost) have been prepared by an ecumenical working group from the Caribbean. A draft of the prayer service, a poster as well as other materials can be downloaded from the website www.gebetswoche.de. Printed materials can be ordered from Verlag Butzon &amp; Bercker (publisher’s distribution address – Frau Bärbel Aymans, Hoogeweg 100, 47623 Kevelaer, telephone: 02832/929291, fax: 02832/929114, email: baerbel.aymans@azb.de. Prices: posters 1.00 €/each; prayer service

Annika Foltin, the new project coordinator for the project, ”Do you know who I am?”, supported by the ACK together with the Central Council of Jews in Germany and four Muslim organizations, started work on 1 September. Individual projects, in which different religions work together, can still receive grants for up to 15,000 euros until 2019. Further information on the project as well as application forms can be found at www.weisstduwerichbin.de. Contact: annika.foltin@weisstduwerichbin.de.

News about celebrating the Creation Time in Germany

By the Council of Churches in Germany (Arbeitsgemeinschaft Christlicher Kirchen in Deutschland), October 2017