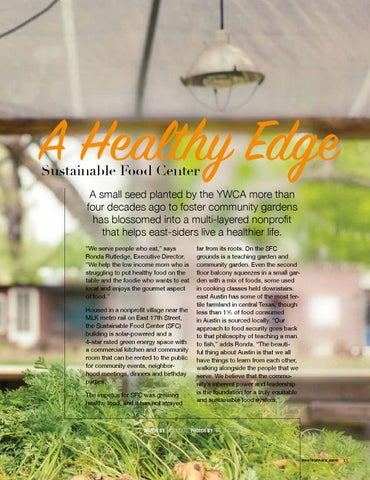 A small seed planted by the YWCA more than four decades ago to foster community gardens has blossomed into a multi-layered nonprofit that helps east-siders live a healthier life.

“We serve people who eat,” says Ronda Rutledge, Executive Director. “We help the low income mom who is struggling to put healthy food on the table and the foodie who wants to eat local and enjoys the gourmet aspect of food.” Housed in a nonprofit village near the MLK metro rail on East 17th Street, the Sustainable Food Center (SFC) building is solar-powered and a 4-star rated green energy space with a commercial kitchen and community room that can be rented to the public for community events, neighborhood meetings, dinners and birthday parties. The impetus for SFC was growing healthy food, and it has not strayed

far from its roots. On the SFC grounds is a teaching garden and community garden. Even the second floor balcony squeezes in a small garden with a mix of foods, some used in cooking classes held downstairs. east Austin has some of the most fertile farmland in central Texas, though less than 1% of food consumed in Austin is sourced locally. “Our approach to food security goes back to that philosophy of teaching a man to fish,” adds Ronda. “The beautiful thing about Austin is that we all have things to learn from each other, walking alongside the people that we serve. We believe that the community’s inherent power and leadership is the foundation for a truly equitable and sustainable food system.”

[the fresher side of austin]

East Austin has fertile soil where we can share, commune, and eat together over a tasty meal brought to you by the farmers down the road. That’s as fresh as it gets, folks! 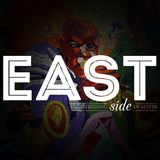