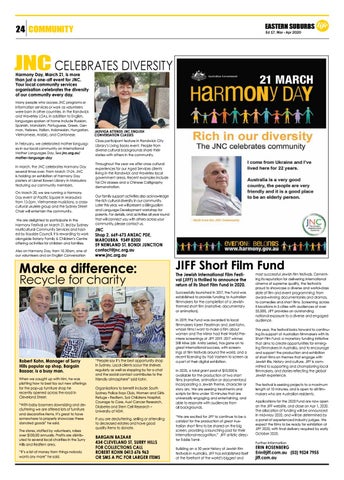 JNC CELEBRATES DIVERSITY Harmony Day, March 21, is more than just a one-off event for JNC. Your local community services organisa­tion celebrates the diversity of our community every day.

Many people who access JNC programs or information services or work as volunteers were born in other countries. In the Randwick and Waverley LGAs, in addition to English, languages spoken at home include Russian, Spanish, Mandarin, Portuguese, Greek, Ger­ man, Hebrew, Italian, Indonesian, Hungarian, Vietnamese, Arabic, and Cantonese. In February, we celebrated mother languag­ es in our local community on International Mother Languages Day. See jnc.org.au/ mother-language-day In March, the JNC celebrates Harmony Day several times over. From March 17-24, JNC is holding an exhibition of Harmony Day posters at Lionel Bowen Library in Maroubra featuring our community members. On March 20, we are running a Harmony Day event at Pacific Square in Maroubra from 12-2pm. Vietnamese musicians, a crosscultural ukulele group and the Sydney Street Choir will entertain the community. We are delighted to participate in the Harmony Festival on March 21, led by Sydney Multicultural Community Services and hosted by Bayside Council. It is rewarding to work alongside Botany Family & Children’s Centre offering activities for children and families. Also on Harmony Day, from 10.30am, one of our volunteers and an English Conversation

JADVIGA ATTENDS JNC ENGLISH CONVERSATION CLASSES Class participant feature in Randwick City Library’s Living Books event. People from di­verse cultural backgrounds share their stories with others in the community. Throughout the year we offer cross cultural experiences for our Aged Services clients living in the Randwick and Waverley local government areas. Recent examples include Tai Chi classes and a Chinese Calligraphy demonstration. Our family support activities also acknowledge the rich cultural diversity in our community. Later this year, we will present a Bilingualism and Language Development workshop for parents. For details, and activities all year round that will connect you with others across your community, please contact us.

Make a difference: Recycle for charity

Successfully launched in 2017, the Fund was established to provide funding to Australian filmmakers for the completion of a Jewishthemed short film (narrative, documentary or animation).

Robert Kohn, Manager of Surry Hills popular op shop, Bargain Bazaar, is a busy man. When we caught up with him, he was plotting how to best lay out new offerings for the pop-up furniture shop he recently opened across the road in Cleveland Street. “With baby boomers downsizing and decluttering we are offered lots of furniture and decorative items. It’s great to have somewhere to properly showcase these donated goods” he said. The stores, staffed by volunteers, raises over $100,00 annually. Profits are distributed to several local charities in the Surry Hills and Redfern area. “It’s a lot of money from things nobody wants any more” he said.

“People say it’s the best opportunity shop in Sydney. Local clients scour the shelves regularly as well as stopping by for a chat and the social contact contributes to the friendly atmosphere” said Kohn. Organisations to benefit include: South Sydney Police Boys Club, Women and Girls Refuge - Redfern, Syd Childrens Hospital, Courage to Care, Aust Cancer Research, Diabetes and Stem Cell Research – University of NSW. If you are decluttering, selling or attending to deceased estates and have good quality items to donate.

In 2019, the Fund was awarded to local filmmakers Karen Pearlman and Joel Kohn, whose films I want to make a film about women and The Mirror had their World Premiere screenings at JIFF 2019. 2017 winner, Still Alive (dir. Anita Lester), has gone on to great international success, with screenings at film festivals around the world, and a recent licensing by Yad Vashem to screen as a part of their digital exhibition. In 2020, a total grant pool of $10,000 is available for the production of two short films (narrative, animation or documentary) incorporating a Jewish theme, character or story arc. We are seeking treatments and scripts for films under 10 minutes that are universally engaging and entertaining, and able to resonate with audiences from all backgrounds. “We are excited for JIFF to continue to be a catalyst for the production of great Australian short films to be shared on the big screen, providing a launching pad for their international recognition,” JIFF artistic director Eddie Tamir. Building on a 30 year history of Jewish film festivals in Australia, JIFF has established itself at the forefront of the world’s biggest and

most successful Jewish film festivals. Cementing its reputation for delivering international cinema of supreme quality, the festival is proud to showcase a diverse and world-class slate of film and event programming: from award-winning documentaries and dramas, to comedies and short films. Screening across 8 locations in 5 cities with audiences of over 55,000, JIFF provides an outstanding national exposure to a diverse and engaged audience. This year, the festival looks forward to continuing its support of Australian filmmakers with its Short Film Fund: a monetary funding initiative that aims to create opportunities for emerging filmmakers in Australia, and to encourage and support the production and exhibition of short films on themes that engage with Jewish life, history and culture. JIFF is committed to supporting and championing local filmmakers, and stories reflecting the global Jewish experience. The festival is seeking projects to a maximum length of 10 minutes, and is open to all filmmakers who are Australian residents. Applications for the 2020 Fund are now open on the JIFF website, and close on Apr 1, 2020. The allocation of funding will be announced in mid-May 2020, and will be determined by a panel of experienced industry judges. We expect the films to be ready for exhibition at JIFF 2020, with final delivery required by early October 2020. Further information 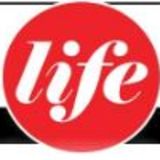