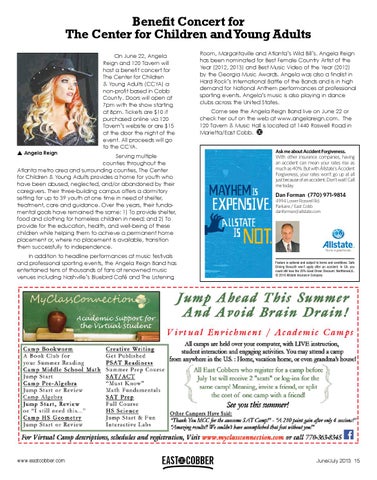 Benefit Concert for The Center for Children and Young Adults

On June 22, Angela Reign and 120 Tavern will host a benefit concert for The Center for Children & Young Adults (CCYA) a non-profit based in Cobb County. Doors will open at 7pm with the show starting at 8pm. Tickets are $10 if purchased online via 120 Tavern’s website or are $15 at the door the night of the event. All proceeds will go to the CCYA.

Room, Margaritaville and Atlanta’s Wild Bill’s. Angela Reign has been nominated for Best Female Country Artist of the Year (2012, 2013) and Best Music Video of the Year (2012) by the Georgia Music Awards. Angela was also a finalist in Hard Rock’s International Battle of the Bands and is in high demand for National Anthem performances at professional sporting events. Angela’s music is also playing in dance clubs across the United States. Come see the Angela Reign Band live on June 22 or check her out on the web at www.angelareign.com.  The 120 Tavern & Music Hall is located at 1440 Roswell Road in Marietta/East Cobb.

Serving multiple counties throughout the Atlanta metro area and surrounding counties, The Center for Children & Young Adults provides a home for youth who have been abused, neglected, and/or abandoned by their caregivers. Their three-building campus offers a dormitory setting for up to 39 youth at one time in need of shelter, treatment, care and guidance. Over the years, their fundamental goals have remained the same: 1) To provide shelter, food and clothing for homeless children in need; and 2) To provide for the education, health, and well-being of these children while helping them to achieve a permanent home placement or, where no placement is available, transition them successfully to independence. In addition to headline performances at music festivals and professional sporting events, the Angela Reign Band has entertained tens of thousands of fans at renowned music venues including Nashville’s Bluebird Café and The Listening

Academic Support for the Virtual Student

Feature is optional and subject to terms and conditions. Safe Driving Bonus® won’t apply after an accident. In CA, you could still lose the 20% Good Driver Discount. Northbrook,IL. © 2010 Allstate Insurance Company

See you this summer! 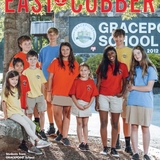