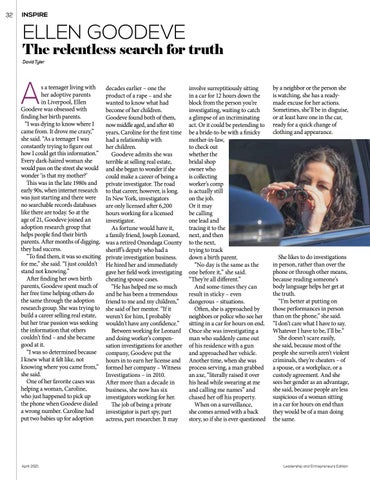 s a teenager living with her adoptive parents in Liverpool, Ellen Goodeve was obsessed with finding her birth parents. “I was dying to know where I came from. It drove me crazy,” she said. “As a teenager I was constantly trying to figure out how I could get this information.” Every dark-haired woman she would pass on the street she would wonder ‘is that my mother?’ This was in the late 1980s and early 90s, when internet research was just starting and there were no searchable records databases like there are today. So at the age of 21, Goodeve joined an adoption research group that helps people find their birth parents. After months of digging, they had success. “To find them, it was so exciting for me,” she said. “I just couldn’t stand not knowing.” After finding her own birth parents, Goodeve spent much of her free time helping others do the same through the adoption research group. She was trying to build a career selling real estate, but her true passion was seeking the information that others couldn’t find – and she became good at it. “I was so determined because I knew what it felt like, not knowing where you came from,” she said. One of her favorite cases was helping a woman, Caroline, who just happened to pick up the phone when Goodeve dialed a wrong number. Caroline had put two babies up for adoption

decades earlier – one the product of a rape – and she wanted to know what had become of her children. Goodeve found both of them, now middle aged, and after 40 years, Caroline for the first time had a relationship with her children. Goodeve admits she was terrible at selling real estate, and she began to wonder if she could make a career of being a private investigator. The road to that career, however, is long. In New York, investigators are only licensed after 6,200 hours working for a licensed investigator. As fortune would have it, a family friend, Joseph Leonard, was a retired Onondaga County sheriff’s deputy who had a private investigation business. He hired her and immediately gave her field work investigating cheating spouse cases. “He has helped me so much and he has been a tremendous friend to me and my children,” she said of her mentor. “If it weren’t for him, I probably wouldn’t have any confidence.” Between working for Leonard and doing worker’s compensation investigations for another company, Goodeve put the hours in to earn her license and formed her company – Witness Investigations – in 2010. After more than a decade in business, she now has six investigators working for her. The job of being a private investigator is part spy, part actress, part researcher. It may

involve surreptitiously sitting in a car for 12 hours down the block from the person you’re investigating, waiting to catch a glimpse of an incriminating act. Or it could be pretending to be a bride-to-be with a finicky mother-in-law, to check out whether the bridal shop owner who is collecting worker’s comp is actually still on the job. Or it may be calling one lead and tracing it to the next, and then to the next, trying to track down a birth parent. “No day is the same as the one before it,” she said. “They’re all different.” And some-times they can result in sticky – even dangerous – situations. Often, she is approached by neighbors or police who see her sitting in a car for hours on end. Once she was investigating a man who suddenly came out of his residence with a gun and approached her vehicle. Another time, when she was process serving, a man grabbed an axe, “literally raised it over his head while swearing at me and calling me names” and chased her off his property. When on a surveillance, she comes armed with a back story, so if she is ever questioned

by a neighbor or the person she is watching, she has a readymade excuse for her actions. Sometimes, she’ll be in disguise, or at least have one in the car, ready for a quick change of clothing and appearance.

She likes to do investigations in person, rather than over the phone or through other means, because reading someone’s body language helps her get at the truth. “I’m better at putting on those performances in person than on the phone,” she said. “I don’t care what I have to say. Whatever I have to be, I’ll be.” She doesn’t scare easily, she said, because most of the people she surveils aren’t violent criminals, they’re cheaters – of a spouse, or a workplace, or a custody agreement. And she sees her gender as an advantage, she said, because people are less suspicious of a woman sitting in a car for hours on end than they would be of a man doing the same. In the Leadership and Entrepreneurs edition, Syracuse Woman Magazine highlights some women who are taking a leading role in moving the Centr...

In the Leadership and Entrepreneurs edition, Syracuse Woman Magazine highlights some women who are taking a leading role in moving the Centr...