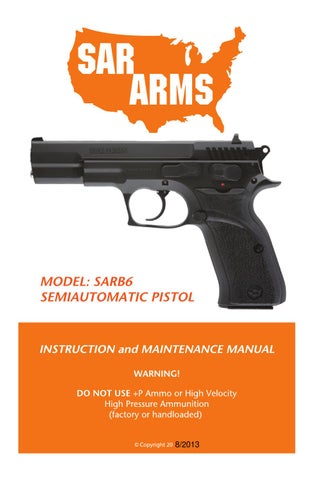 (Mechanical Malfunctions) STOP SHOOTING IMMEDIATELY AND UNLOAD YOUR FIREARM if your firearm develops: a mechanical malfunction; binding or stoppage; spitting powder/gas; a punctured cartridge primer; a bulged or ruptured cartridge case; or a sound on firing does not sound quite right. Do NOT try one more shot but unload your firearm and take it and the ammunition to a qualified gunsmith or send the firearm back to European American Armory Corp. for examination. Do not assume that the pistol is empty merely because you checked the chamber. You must also check the bore for any obstruction inside the barrel. BASIC PARTS OF YOUR PISTOL EXTERNAL CONTROL PARTS: Trigger Block Safety: The safety mechanism of the pistol provides protection against accidental and unintentional discharge under normal usage when prop erly engaged and in good working order. The safety mechanism is not a substitute for following safe gun handling rules. Do not disengage the safety unless you are ready to fire the pistol. MAKE SURE YOU UNDERSTAND HOW THE SAFETY WORKS BEFORE YOU LOAD OR USE THE PISTOL.

The safety mechanism is a lever located on the side of the pistol's receiver. See Picture 1 The safety may be operated with the hammer cocked (fully back) or not cocked (all the way down) or in the resting position (about halfway between fully cocked and not cocked} and with the pistol loaded or unloaded. To place the safety in the "on" or "safe" position, push the lever down so that it covers the red dot. When in the "on" or "safe" position, the safety blocks the rearward motion of the trigger so that it cannot be pulled to the rear thus stopping the movement of the hammer. To place the safety in the "off'' or "fire" position, push the safety lever up. When in the "off'' or "fire" position, the red dot is exposed. You have now disengaged the safety and the pistol is in the ready-to-fire position. It is always a good idea tomake sure the gun is pointed in a safe direction. See Picture 3

Do not touch the trigger while moving the safety. When operating the safety, make sure you move it to the full extent of its travel in the desired direction, either fully "on" or fully "off." Half-safe or partially-safe is UNSAFE. The pistol does not incorporate a magazine disconnect safety, so the pistol may be fired with the magazine removed from the pistol.

Extreme caution must be used when lowering the hammer as the manual safety and automatic firing pin block are "off" safety when this is being done ! If done incorrectly the pistol may FIRE. Your pistol has a resting position or notch on the hammer .This notch is not to be used as a half cock position. This notch sole purpose is an additional notch on the hammer so as to allow the sear a chance to engage the hammer if the trigger is not pulled fully to the rear. See Fig 34 In order to lower the hammer, first move the safety to the “off” or “fire” position. Grasp the hammer very firmly and put a finger between the hammer and the firing pin. See Fig 4 Then pull the trigger and slowly let the hammer move forward past the resting position. See Fig 5 RELEASE THE TRIGGER. Gently let the hammer down against the rear of the slide. See Fig 6 PUSH THE MANUAL SAFETY LEVER TO THE "ON" OR "SAFE" POSITION. Slide Stop: Locks the slide back when engaged located on left hand side of the gun. See Fig 7 Magazine Release: Locks or holds the magazine in place and is depressed to release the magazine. See Fig 8 Rear Sight: Drift adjustable, unless the gun is shipped with the optional windage / elevation adjustable sight. See Fig 9 Trigger: A curved trigger is a single action / double action trigger and fires the gun in single action or double action mode. See Fig 10 (Single Action / Double Action Trigger)

TO LOAD THE MAGAZINE: 1) Press the magazine release button and remove the magazine from the pistol. See Fig 11 2) Load the cartridges into the magazine. Do NOT force the cartridges into the magazine. Do NOT overload the magazine. See Fig 12 3) Push the magazine up into the pistol firmly until the magazine catch locks it into place. Do NOT slam the magazine into place. See Fig 13 TO LOAD THE CHAMBER: MAKE SURE YOUR FINGERS ARE OFF THE TRIGGER AND AWAY FROM THE TRIGGER GUARD 1) With the gun pointed in a safe direction. Move safety to the “off” or “fire” position if the hammer is in the down position or resting position. If the hammer is in the fully cocked position you may bypass step one. 2) Hold the pistol grip with one hand, grasp the rear slide serrations as far back as possible with your other hand. Pull the slide rearward until it cannot travel any further. See Fig 14 3) Release the slide and allow it to go forward into the closed position (as powdered by the recoil spring...Do not help / push the slide forward). The slide will automatically take a cartridge from the magazine and load it into the chamber. See Fig 15 4) Do NOT put your fingers or hand in front of the barrel. 5) Move the safety to the “on” or “safe” position or fully up IMMEDIATELY!!!!! See Fig 16

If you fired the pistol and wish to stop firing, immediately push the trigger block safety to the "on" or "safe" position. Then follow the unloading instructions above while keeping the muzzle pointed in a safe direction. DIRECTIONS FOR DISASSEMBLY / RE-ASSEMBLY OF THE PISTOL: 1) Make sure the pistol is unloaded (FOLLOW UNLOADING INSTRUCTIONS) and pointed in a safe direction. 2) Pull the hammer back to the full cock position. See Fig 27 3) Identify the two takedown marks behind the safety lever on the left side of the slide and frame. Pull the slide back slightly and line up the two marks. See Fig 28.

HINT: Use the rearsight for leverage when lining up the marks.

4) Remove the slide stop-takedown lever by pushing on the end sticking out of the right side of the pistol and pull on the lever with your other hand. See Fig 29A and 29B 5) Slide the Barrel / Slide Assembly forward and off the receiver. See Fig 30 6) Hold the slide upside down. Retract the recoil spring and guide and remove the recoil spring and guide as an assembly. See Fig 31 7) Remove the barrel from the slide. See Fig 32 and 33 8) NO FURTHER DISASSEMBLY of the pistol is recommended unless performed by a qualified gunsmith. Remember that work done by others and unauthorized gunsmithing by non-factory personnel will VOID the warranty. 9) To re-assemble the pistol, simply reverse these procedures. 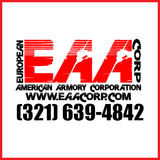 Instruction and maintenance manual for the EAA Corp SAR B6 Semiautomatic polymer pistol.

Instruction and maintenance manual for the EAA Corp SAR B6 Semiautomatic polymer pistol.