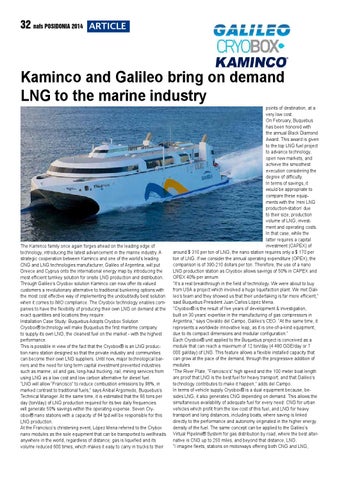 Kaminco and Galileo bring on demand LNG to the marine industry

The Kaminco family once again forges ahead on the leading edge of technology, introducing the latest advancement in the marine industry. A strategic cooperation between Kaminco and one of the world’s leading CNG and LNG technologies manufacturer, Galileo of Argentina, will put Greece and Cyprus onto the international energy map by introducing the most efficient turnkey solution for onsite LNG production and distribution. Through Galileo’s Cryobox solution Kaminco can now offer its valued customers a revolutionary alternative to traditional bunkering options with the most cost effective way of implementing the undoubtedly best solution when it comes to IMO compliance. The Cryobox technology enables companies to have the flexibility of producing their own LNG on demand at the exact quantities and locations they require. Installation Case Study: Buquebus Adopts Cryobox Solution Cryobox® technology will make Buquebus the first maritime company to supply its own LNG, the cleanest fuel on the market - with the highest performance. This is possible in view of the fact that the Cryobox® is an LNG production nano station designed so that the private industry and communities can become their own LNG suppliers. Until now, major technological barriers and the need for long term capital investment prevented industries such as marine, oil and gas, long-haul trucking, rail, mining services from using LNG as a low cost and low carbon alternative for diesel fuel. “LNG will allow “Francisco” to reduce combustion emissions by 98%, in marked contrast to traditional fuels,” says Anibal Argomedo, Buquebus’s Technical Manager. At the same time, it is estimated that the 66 tons per day (ton/day) of LNG production required for its two daily frequencies will generate 50% savings within the operating expense. Seven Cryobox® nano stations with a capacity of 84 tpd will be responsible for this LNG production. At the Francisco’s christening event, López Mena referred to the Crybox nano modules as the sole equipment that can be transported to wellheads anywhere in the world, regardless of distance; gas is liquefied and its volume reduced 600 times, which makes it easy to carry in trucks to their

points of destination, at a very low cost. On February, Buquebus has been honored with the annual Black Diamond Award. This award is given to the top LNG fuel project to advance technology, open new markets, and achieve the smoothest execution considering the degree of difficulty. In terms of savings, it would be appropriate to compare these equipments with the ‘mini LNG production-station’ due to their size, production volume of LNG, investment and operating costs. In that case, while the latter requires a capital investment (CAPEX) of around $ 310 per ton of LNG, the nano station requires only a $ 170 per ton of LNG. If we consider the annual operating expenditure (OPEX), the comparison is of 390-210 dollars per ton. Therefore, the use of a nano LNG production station as Cryobox allows savings of 50% in CAPEX and OPEX 40% per annum. “It’s a real breakthrough in the field of technology. We were about to buy from USA a project which involved a huge liquefaction plant. We met Galileo’s team and they showed us that their undertaking is far more efficient,” said Buquebus President Juan Carlos López Mena. “Cryobox® is the result of five years of development &amp; investigation, built on 30 years’ expertise in the manufacturing of gas compressors in Argentina,” says Osvaldo del Campo, Galileo’s CEO. “At the same time, it represents a worldwide innovative leap, as it is one-of-a-kind equipment, due to its compact dimensions and modular configuration.” Each Cryobox® unit applied to the Buquebus project is conceived as a module that can reach a maximum of 12 ton/day (4 480 GGE/day or 7 000 gal/day) of LNG. This feature allows a flexible installed capacity that can grow at the pace of the demand, through the progressive addition of modules. “The River Plate, “Francisco’s” high speed and the 100 meter boat length are proof that LNG is the best fuel for heavy transport, and that Galileo’s technology contributes to make it happen,” adds del Campo. In terms of vehicle supply Cryobox® is a dual equipment because, besides LNG, it also generates CNG depending on demand. This allows the simultaneous availability of adequate fuel for every need: CNG for urban vehicles which profit from the low cost of this fuel, and LNG for heavy transport and long distances, including boats, where saving is linked directly to the performance and autonomy originated in the higher energy density of the fuel. The same concept can be applied to the Galileo’s Virtual Pipeline® System for gas distribution by road, where the best alternative is CNG up to 250 miles, and beyond that distance, LNG. “I imagine fleets, stations on motorways offering both CNG and LNG, 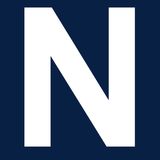