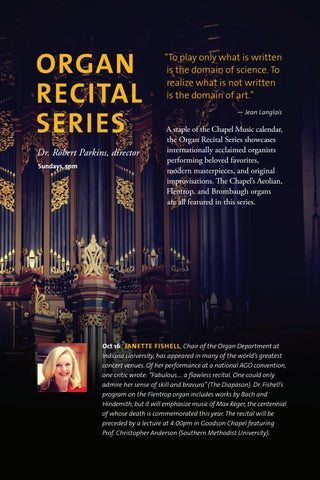 A staple of the Chapel Music calendar, the Organ Recital Series showcases internationally acclaimed organists performing beloved favorites, modern masterpieces, and original improvisations. The Chapel’s Aeolian, Flentrop, and Brombaugh organs are all featured in this series.

Oct 16 JANETTE FISHELL, Chair of the Organ Department at Indiana University, has appeared in many of the world’s greatest concert venues. Of her performance at a national AGO convention, one critic wrote: “Fabulous…. a flawless recital. One could only admire her sense of skill and bravura” (The Diapason). Dr. Fishell’s program on the Flentrop organ includes works by Bach and Hindemith, but it will emphasize music of Max Reger, the centennial of whose death is commemorated this year. The recital will be preceded by a lecture at 4:00pm in Goodson Chapel featuring Prof. Christopher Anderson (Southern Methodist University).

The series of more than 30 performances, part of the Chapel’s yearlong reopening celebration, comprises four choirs, four organs, and the Chapel’s carillon, in addition to guest soloists and musicians. All of the concerts are free unless otherwise indicated. Mark your calendars, using the full series listing in this brochure or online at chapel.duke.edu/music.