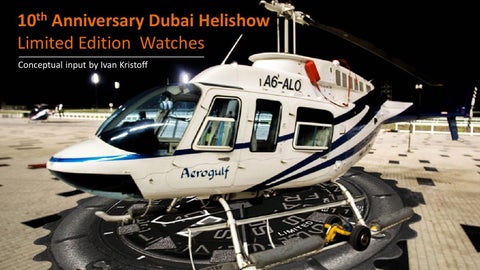 I WAS INSPIRED BY THE DUBAI HELISHOW AND ITS CLIENT’S HELICOPTERS , WHICH WERE ON DISPLAY, TO CREATE A SERIES OF LIMITED EDITION WATCHES FOR THE 10TH ANNIVERSARY IN 2014.

Pro instruments for extreme pros Ivan Kristoff has always been fascinated by aeronautical instruments for extreme professionals and by working on helicopters in extreme operations. Over the years he developed his own ideas to design the visual parameters of a watch for ER and specialized rope access work. His inspiration has nurtured the development of strong relations with Swiss Made Watch companies as an exclusive promoter and presenter of the world's innovation in the watch making industry. This year he will work closely with watch makers to design the First Edition of specialized aeronautical ER and Rope Rescue watch. Since legibility in extreme situations and emergency crises is vital to air rescue pilots, emergency responders and SAR technicians, three colors have been chosen for this watch: black for its antireflective properties, white for contrast and orange for its extreme legibility and association for danger and need for attention. These colors are also embedded in the brand of Dubai Helishow. In 2014, Ivan Kristoff will present the First Edition of specialized aeronautical ER and Rope Rescue watch, designed especially for aviators and extreme rope access technicians, who demand readability in all circumstances.

The color of the highlighted cities should be as the Orange color of Dubai Helishowâ&#x20AC;&#x2122;s logo The Globe in the circle should represent the cities of the nations that are part of the Dubai Helishow 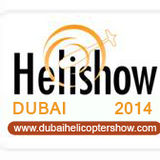