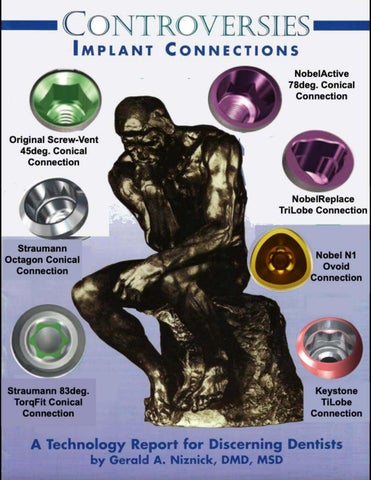 Here is a 12 page Technology Report that addresses the many controversies and misconceptions related to the design of the implantabutment connection. From 1983 through the end of the 1990’s external hex connections (Branemark Implant) were considered by many as the gold standard. Because of its history of bone loss, implant fractures, loose screws and micro-leakage, it was replaced by internal conical connections, ﬁrst introduced in 1986 with the Screw-Vent implant (Niznick US Pat. #4,960,381).Internal connections have dominated the implant industry in the last 20 years, some with tube-in-tube designs (Keystone’s Genesis and Neoss) but mostly with lead-in bevels. The deﬁnition of a “conical” feature is “having the shape of a cone. ” NobelBiocare popularized the term “conical connection” with its 78 degree lead-in bevel on its NobelActive implant. The term Conical Connection is not dependent on whether the cone or lead-in bevel is 45 degrees like the original Screw-Vent (often referred to as the Standard connection), 74 degrees like Neodent’s Grand Morse implant, 78 degrees like NobelActive or 83 degrees like the Straumann BLX. To assure a seal at the top of the internal shaft, the angle of the bevel on the mating surface of the abutment is 1 degree steeper, therefore the length of the bevel does not add to stability. This 12 page report and review of the literature addresses the many controversial issues related to implant connections: (1) Angle of the lead-in bevel, (2) Platform Switching, (3) One Platform for all diameters, (4) Subcrestal Placement, (5) Friction-ﬁt connection, (6) hex, tri-lobe or slots for wrench-engaging surfaces It is time to separate clinical reality from marketing rhetoric. https://lnkd.in/gAJwhAnS

In 1986, Dr. Gerald Niznick, through his Core-Vent implant company, introduced the straight Screw-Vent® dental implant with a unique, internal connection consisting of a 45 degree lead-in bevel and internal hex above internal threads. In 1999, Dr. Niznick launched the Tapered Screw-Vent and published an article on optimizing initial stability in soft bone by placing a tapered implant into an undersized socket prepared with a straight step drill. 2000 Article: “Achieving Osseointegration in Soft Bone: The Search for Improved Results” The Screw-Vent incorporated the same thread design and diameter (3.75 mm) as the Branemark implant, but featured a 1.5 mm-deep internal hexagon with a threaded shaft below it. This patented connection provides the stability needed between the implant and the abutment to prevent screw loosening and thus minimizes long-term prosthetic complications. It also allows screw-retained, two-piece abutments to interlock with the internal hexagon to prevent rotation, which made single tooth replacement a viable option in implant restorations. At the top of the internal hexagon, a lead-in bevel helps stabilize the abutment against lateral forces and reduces the chance of tissue being trapped in the joint, which could result in incomplete seating Below are the Legacy2 Implants with patented micro-threads and patented 2-piece healing collar from Implant Direct.

The history behind the Platform Switching theory is that Implant Innovations (3i) in the early 1990s introduced a 5mmD wide external hex implant as an addition it its 4mmD Branemark clone implant. It did not have enough of a selection of 5mmD wide abutments so dentists started to attach the 4mmD abutments which left 1/2mm of the shoulder exposed at the top of the implant. Dr. Tarnow theorized that by medializing the gap between the implant and the abutment, the eﬀect of micro-leakage would be reduced and thus help preserve the crest of the ridge. The answer to minimize or entirely prevent micro-leakage and improve stability to reduce screw-loosening was the introduction of the conical connection in 1986 with the Screw-Vent (Niznick Patent 4,960,381). The Patent was not limited to any particular type of internal wrench-engaging surface or angle of bevel, although the preferred embodiment was an internal hex and a 45 degree bevel. As shown on this patent drawing, medializing the interface is inherent in conical connections. To promote manufacturing only one diameter internal connection over a range of implant diameters, manufactures claim this adds simplicity. One connection allows manufactures to reduce the number of items it needs to manufacture but it creates deep platform switching with larger diameter implants. This compromises creating an esthetic and hygienic emergence proﬁle needed for crown and Eﬀect of platform switching on peri-implant bone levels.

of6 13 Inﬂuence of Implant Placement Depth on Crestal Bone Stability.

of7 13 The 78deg. & 45deg. lead-in bevels create a conical connection by deﬁnition. Regardless of the implant angle, the mating abutment angle is about 1/2 deg. less to assure a sealed contact at the top of the internal shaft. NobelActive popularized the 78 degree “conical connection”. It oﬀers no advantages over the Standard 45 degree 1986 Screw-Vent Connection

of8 13 The angle of the lead-in precludeconnectionswalls.thinnessconnectiondepthdeterminesbeveltheoftheandoftheDeepmaking 6 mm long implants. Many implant systems oﬀer only one connection diameter for all diameters of implant, claiming an advantage by reducing the number of abutment options

Straumann’s Tissue Level implant introduced in 1986 with a trans-mucosal smooth, neck provided for hygiene. With only one connection, creating an and with include most of including

hygienic emergence proﬁle to the abutment is compromised Companies

of9 13 Stability is optimized by engagement of the conical connection, not the ﬂat top surface of the implant. Ideal emergence proﬁle requires an abutment that matches the diameter of the implant platform. SOLUTION: Cad milled abutments with friction-ﬁt connections EmergenceIdealProﬁle EmergenceIdealProﬁle Straumann’s BLX/TLX System oﬀers only 1 internal conical connection diameter for 7 implant diameters. For wider implants, a wider abutment sits on shoulder

of10 13 NeoDent is Straumann’s Brazilian Implant Company - three designs with the same 74 deg. connection for all diameters. NOT RECOMMENDED FOR ALL BONE TYPES 2 OF THE 7 DIAMETERS DIFFER IN SIZE BY ONLY THE THICKNESS OF A FEW HAIRS

Neodent claims a number of advantages to this implant system:

• Platform Switching. This is common to all internal conical connections and has no proven clinical advantage.

• Deep Connection “allows a large contact area between the abutment and the implant for an optimal load distribution.” In fact, all conical connection interfaces make contact only at the opening to the internal shaft.

• 16 degree Morse Taper connection “designed to ensure tight ﬁt for an optimal connection sealing.” The fact is that regardless of the angle of the lead-in bevel, to assure a seal, contact is only made at the shaft opening.

• Precise abutment positioning protection against rotation and easy handling This is a common advantage with all internal conical connections.

Dr. Niznick ﬁled a patent in January 1987 on the internal conical connection. The angle of the lead-in bevel and the form of the internal wrench-engaging surfaces were not speciﬁc to the 45 deg. bevel or the internal hex in the preferred embodiment. The NobelActive could not be sold in the US until this patent expired in October 2007. In July, 1992, Dr. Niznick ﬁled a patent on the ﬁrst Transfer component with hex indexing and that patent also contained a claim for a taper on the male hex (1 degree) to create an interference ﬁt with the implant’s internal hex. Only by screwing the components together at 20+Ncm would the abutment fully seat in the hex, creating a friction ﬁt for stability.

The Screw-Vent/Legacy uses a 44.5 degree lead-in bevel. I got the idea from crown preparations on natural teeth where a bevel or chamfer gives a better sealed margin than a butt joint that was only used on all porcelain jackets 50 years ago for esthetic restorations of anterior teeth. Using 44.5 degrees maintained the strength of the walls and only required about 0.50mm of depth. By making the bevel of the abutment mating hex slightly greater (45 degrees), the ﬁrst point of contact occurres at the opening to the shaft, assuring a tight seal and good lateral stability. The big diﬀerence between internal and external hex connections is that with internal, the ﬁxation screw is protected from lateral forces by the walls of the male hex engaging the lateral walls of the implant’s internal hex resisting lateral forces - the ﬁxation screw does not ﬂex, as it does with external hex connections, allowing opening of the butt joint margins and loosening of the screw.

Gerald Niznick DMD, MSD what is the height of your lead in bevel and what is the purpose you had designed it for?

NobelBiocare did not introduce the NobelActive conical connection into the US until 2008 after my patent expired October 2007.

Thank you Jerry! This is a must read for any student “or proclaimer” of being an expert in implantology. Filled with great examples, pics, and always a heavy dose of Jerry. I’m ok with the extra dose my friend, you deserve it at this point. Always excited to read your candid, no-limits comments on any topic you want to chime in. I’ve learned that knowing history in depth about whatever topic or person in question, goes miles in growing as an individual and truly learning from others mistakes. Kudos, my friend! 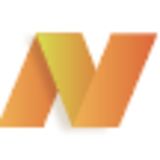