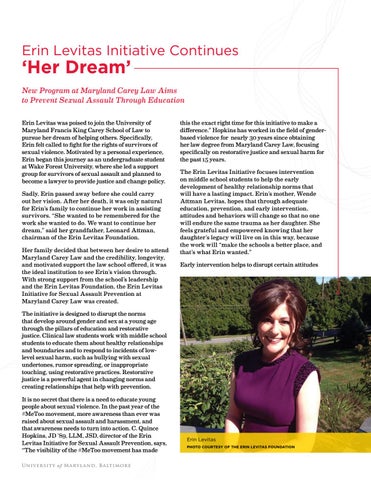 New Program at Maryland Carey Law Aims to Prevent Sexual Assault Through Education Erin Levitas was poised to join the University of Maryland Francis King Carey School of Law to pursue her dream of helping others. Specifically, Erin felt called to fight for the rights of survivors of sexual violence. Motivated by a personal experience, Erin began this journey as an undergraduate student at Wake Forest University, where she led a support group for survivors of sexual assault and planned to become a lawyer to provide justice and change policy. Sadly, Erin passed away before she could carry out her vision. After her death, it was only natural for Erin’s family to continue her work in assisting survivors. “She wanted to be remembered for the work she wanted to do. We want to continue her dream,” said her grandfather, Leonard Attman, chairman of the Erin Levitas Foundation. Her family decided that between her desire to attend Maryland Carey Law and the credibility, longevity, and motivated support the law school offered, it was the ideal institution to see Erin’s vision through. With strong support from the school’s leadership and the Erin Levitas Foundation, the Erin Levitas Initiative for Sexual Assault Prevention at Maryland Carey Law was created.

this the exact right time for this initiative to make a difference.” Hopkins has worked in the field of genderbased violence for nearly 30 years since obtaining her law degree from Maryland Carey Law, focusing specifically on restorative justice and sexual harm for the past 15 years. The Erin Levitas Initiative focuses intervention on middle school students to help the early development of healthy relationship norms that will have a lasting impact. Erin’s mother, Wende Attman Levitas, hopes that through adequate education, prevention, and early intervention, attitudes and behaviors will change so that no one will endure the same trauma as her daughter. She feels grateful and empowered knowing that her daughter’s legacy will live on in this way, because the work will “make the schools a better place, and that’s what Erin wanted.” Early intervention helps to disrupt certain attitudes

The initiative is designed to disrupt the norms that develop around gender and sex at a young age through the pillars of education and restorative justice. Clinical law students work with middle school students to educate them about healthy relationships and boundaries and to respond to incidents of lowlevel sexual harm, such as bullying with sexual undertones, rumor spreading, or inappropriate touching, using restorative practices. Restorative justice is a powerful agent in changing norms and creating relationships that help with prevention. It is no secret that there is a need to educate young people about sexual violence. In the past year of the #MeToo movement, more awareness than ever was raised about sexual assault and harassment, and that awareness needs to turn into action. C. Quince Hopkins, JD ’89, LLM, JSD, director of the Erin Levitas Initiative for Sexual Assault Prevention, says, “The visibility of the #MeToo movement has made University of M aryl and, Baltimore 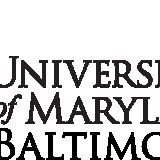