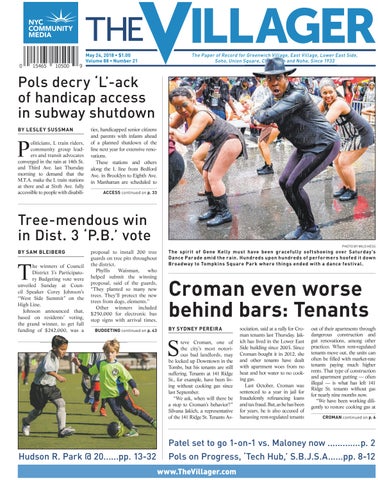 oliticians, L train riders, community group leaders and transit advocates converged in the rain at 14th St. and Third Ave. last Thursday morning to demand that the M.T.A. make the L train stations at there and at Sixth Ave. fully accessible to people with disabili-

ties, handicapped senior citizens and parents with infants ahead of a planned shutdown of the line next year for extensive renovations. These stations and others along the L line from Bedford Ave. in Brooklyn to Eighth Ave. in Manhattan are scheduled to ACCESS continued on p. 33

he winners of Council District 3’s Participatory Budgeting vote were unveiled Sunday at Council Speaker Corey Johnson’s “West Side Summit” on the High Line. Johnson announced that, based on residents’ voting, the grand winner, to get full funding off $242,000, was a

proposal to install 200 tree guards on tree pits throughout the district. Phyllis Waisman, who helped submit the winning proposal, said of the guards, “They planted so many new trees. They’ll protect the new trees from dogs, elements.” Other winners included $250,000 for electronic bus stop signs with arrival times, BUDGETING con continued on p. 43

The spirit of Gene Kelly must have been gracefully softshoeing over Saturday’s Dance Parade amid the rain. Hundreds upon hundreds of per formers hoofed it down Broadway to Tompkins Square Park where things ended with a dance festival.

Croman even worse behind bars: Tenants BY SYDNEY PEREIR A

teve Croman, one of the city’s most notorious bad landlords, may be locked up Downtown in the Tombs, but his tenants are still suffering. Tenants at 141 Ridge St., for example, have been living without cooking gas since last September. “We ask, when will there be a stop to Croman’s behavior?” Silvana Jakich, a representative of the 141 Ridge St. Tenants As-

sociation, said at a rally for Croman tenants last Thursday. Jakich has lived in the Lower East Side building since 2003. Since Croman bought it in 2012, she and other tenants have dealt with apartment woes from no heat and hot water to no cooking gas. Last October, Croman was sentenced to a year in jail for fraudulently refinancing loans and tax fraud. But, as he has been for years, he is also accused of harassing rent-regulated tenants

out of their apartments through dangerous construction and gut renovations, among other practices. When rent-regulated tenants move out, the units can often be filled with market-rate tenants paying much higher rents. That type of construction and apartment gutting — often illegal — is what has left 141 Ridge St. tenants without gas for nearly nine months now. “We have been working diligently to restore cooking gas at CROMAN continued on p. 6

seph Betesh, as well as de Blasioâ&#x20AC;&#x2122;s role in pushing for pro-developer housing and zoning across the city.â&#x20AC;?

AND THEN THERE WERE TWO: The Democratic primary for the 12th Congressional District on June 26 is now down to a pair of candidates, the longtime incumbent, Carolyn Maloney, and the upstart challenger, Suraj Patel. Patel has now knocked off two other candidates, Peter Lindner and Sander Hicks, a diehard 9/11 Truther, by challenging the petition signatures they collected to get on the ballot. â&#x20AC;&#x153;We fought hard in the courts for three days, but we came up about 100 signatures short,â&#x20AC;? Hicks told us. â&#x20AC;&#x153;We will get back on the ballot in November as an independent progressive candidate. Yes, the challenge came from Patel and his minions. The New York â&#x20AC;&#x2DC;closed Democratic Primaryâ&#x20AC;&#x2122; is closed-minded,â&#x20AC;? he said. â&#x20AC;&#x153;We prefer to run against Maloney in a race in which we can win over progressive free-thinking Democratic, independent, Green and Libertarian voters. Even G.O.P. voters in New York City will be attracted to my maverick, award-winning accomplishments as a small

CANâ&#x20AC;&#x2122;T STOMACH IT: The displaced tenants of 85 Bowery are set to resume their hunger strike on Wed., May 30, after they failed to receive a guarantee that they can return home. This time, according to a press release, the hunger strike will be in front of City Hall, at Broadway and Murray St., â&#x20AC;&#x153;to denounce Mayor Bill de Blasioâ&#x20AC;&#x2122;s collusion with landlords like Jo-