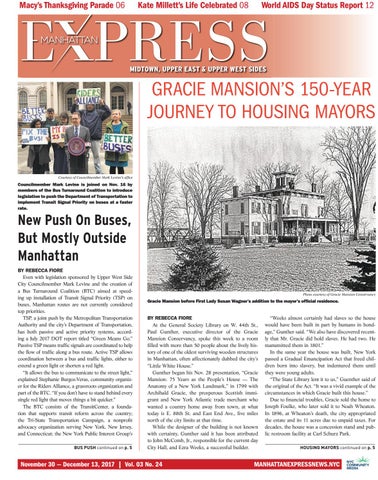 Councilmember Mark Levine is joined on Nov. 16 by members of the Bus Turnaround Coalition to introduce legislation to push the Department of Transportation to implement Transit Signal Priority on buses at a faster rate.

New Push On Buses, But Mostly Outside Manhattan BY REBECCA FIORE Even with legislation sponsored by Upper West Side City Councilmember Mark Levine and the creation of a Bus Turnaround Coalition (BTC) aimed at speeding up installation of Transit Signal Priority (TSP) on buses, Manhattan routes are not currently considered top priorities. TSP, a joint push by the Metropolitan Transportation Authority and the city’s Department of Transportation, has both passive and active priority systems, according a July 2017 DOT report titled “Green Means Go.” Passive TSP means traffic signals are coordinated to help the flow of traffic along a bus route. Active TSP allows coordination between a bus and traffic lights, either to extend a green light or shorten a red light. “It allows the bus to communicate to the street light,” explained Stephanie Burgos-Veras, community organizer for the Riders Alliance, a grassroots organization and part of the BTC. “If you don’t have to stand behind every single red light that moves things a bit quicker.” The BTC consists of the TransitCenter, a foundation that supports transit reform across the country; the Tri-State Transportation Campaign, a nonprofit advocacy organization serving New York, New Jersey, and Connecticut; the New York Public Interest Group’s BUS PUSH continued on p. 5

BY REBECCA FIORE At the General Society Library on W. 44th St., Paul Gunther, executive director of the Gracie Mansion Conservancy, spoke this week to a room filled with more than 50 people about the lively history of one of the oldest surviving wooden structures in Manhattan, often affectionately dubbed the city’s “Little White House.” Gunther began his Nov. 28 presentation, “Gracie Mansion: 75 Years as the People’s House — The Anatomy of a New York Landmark,” in 1799 with Archibald Gracie, the prosperous Scottish immigrant and New York Atlantic trade merchant who wanted a country home away from town, at what today is E. 88th St. and East End Ave., five miles north of the city limits at that time. While the designer of the building is not known with certainty, Gunther said it has been attributed to John McComb, Jr., responsible for the current day City Hall, and Ezra Weeks, a successful builder.

“Weeks almost certainly had slaves so the house would have been built in part by humans in bondage,” Gunther said. “We also have discovered recently that Mr. Gracie did hold slaves. He had two. He manumitted them in 1801.” In the same year the house was built, New York passed a Gradual Emancipation Act that freed children born into slavery, but indentured them until they were young adults. “The State Library lent it to us,” Guenther said of the original of the Act. “It was a vivid example of the circumstances in which Gracie built this house.” Due to financial troubles, Gracie sold the home to Joseph Foulke, who later sold it to Noah Wheaton. In 1896, at Wheaton’s death, the city appropriated the estate and its 11 acres due to unpaid taxes. For decades, the house was a concession stand and public restroom facility at Carl Schurz Park. HOUSING MAYORS continued on p. 5

London hospitality group rhubarb will bring to their Hudson Yards presence the same flair for drama and detail that was on display at the Natural History Museumâ&#x20AC;&#x2122;s launch event for Hope the blue whale.

TIRED OF LEARNING ONLY WHAT OTHER PEOPLE THINK IS IMPORTANT? 

Tenacious Tenants Seek Solutions as Gas Outages Go On for Years BY WINNIE McCROY Forgoing the classic oven-roasted Thanksgiving turkey for a more manageable pan-sauteed chicken, Chelsea resident Jordan Lage set out to make his familyâ&#x20AC;&#x2122;s holiday dinner last week using only a hot plate and a microwave oven. Itâ&#x20AC;&#x2122;s not that theyâ&#x20AC;&#x2122;re parsimonious; itâ&#x20AC;&#x2122;s just that they havenâ&#x20AC;&#x2122;t had cooking gas at their five-story apartment building since February 2016. The situation at 311 W. 21st St. (btw. Eighth & Ninth Aves.) was outlined in a recent article that looked at NYC Management Corp., the company that took over the former Sidney Rubell property after a gas leak, and never bothered to restore the gas (see Chelsea Now, Oct. 26, 2017: â&#x20AC;&#x153;20 Months After Shutoff, Tenants Still Getting Burned by Lack of Cooking Gasâ&#x20AC;?). Lage and his partner, Kelly Maurer, have lived in the building for nearly 19 years. But in the spring, when their 12-year-old daughter was injured and they realized they had no gas to cook her dinner, no hot water for a bath, and no heat, they finally said, â&#x20AC;&#x153;Enough.â&#x20AC;? A loosely formed coalition of renters came together to petition their elected officials, including City Councilmember Corey Johnson, to help restore their utilities. And after some stonewalling, the building owner finally agreed to meet with tenants to discuss the situation. â&#x20AC;&#x153;Our office facilitated a meeting last Thursday [Nov. 9], and we made progress in addressing these issues, including plans for construction in the building, which tenants had not heard about, as well as when gas is going to be restored,â&#x20AC;? said Matt Green, the councilmemberâ&#x20AC;&#x2122;s deputy chief of staff. â&#x20AC;&#x153;Our office is assisting in the city inspection with Con Edison and the Department of Buildings [DOB] to make sure the work the licensed plumber is doing is

In Michael Harwoodâ&#x20AC;&#x2122;s kitchen at 206 Ninth Ave., the non-functioning gas stove is covered with a plywood panel to support his professional grade hot plate. Nearby, a microwave and toaster oven round out the makeshift cooking setup.

A COOK KEPT ON ICE Photo by Scott Stiffler

Some of the tenants at 336 W. 17th St., where the building has been without gas for nearly 30 months. Top row, L to R: Craig Roseberry and Danny Quinones. Bottom row, L to R: John Martin Gutenkauf and Calder Kusmierski Singer.