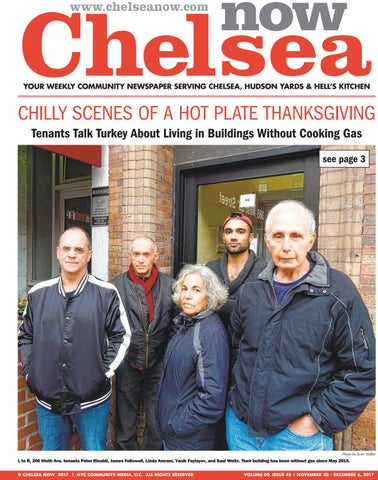 London hospitality group rhubarb will bring to their Hudson Yards presence the same flair for drama and detail that was on display at the Natural History Museumâ&#x20AC;&#x2122;s launch event for Hope the blue whale.

TIRED OF LEARNING ONLY WHAT OTHER PEOPLE THINK IS IMPORTANT? 

Tenacious Tenants Seek Solutions as Gas Outages Go On for Years BY WINNIE McCROY Forgoing the classic oven-roasted Thanksgiving turkey for a more manageable pan-sauteed chicken, Chelsea resident Jordan Lage set out to make his familyâ&#x20AC;&#x2122;s holiday dinner last week using only a hot plate and a microwave oven. Itâ&#x20AC;&#x2122;s not that theyâ&#x20AC;&#x2122;re parsimonious; itâ&#x20AC;&#x2122;s just that they havenâ&#x20AC;&#x2122;t had cooking gas at their five-story apartment building since February 2016. The situation at 311 W. 21st St. (btw. Eighth & Ninth Aves.) was outlined in a recent article that looked at NYC Management Corp., the company that took over the former Sidney Rubell property after a gas leak, and never bothered to restore the gas (see Chelsea Now, Oct. 26, 2017: â&#x20AC;&#x153;20 Months After Shutoff, Tenants Still Getting Burned by Lack of Cooking Gasâ&#x20AC;?). Lage and his partner, Kelly Maurer, have lived in the building for nearly 19 years. But in the spring, when their 12-year-old daughter was injured and they realized they had no gas to cook her dinner, no hot water for a bath, and no heat, they finally said, â&#x20AC;&#x153;Enough.â&#x20AC;? A loosely formed coalition of renters came together to petition their elected officials, including City Councilmember Corey Johnson, to help restore their utilities. And after some stonewalling, the building owner finally agreed to meet with tenants to discuss the situation. â&#x20AC;&#x153;Our office facilitated a meeting last Thursday [Nov. 9], and we made progress in addressing these issues, including plans for construction in the building, which tenants had not heard about, as well as when gas is going to be restored,â&#x20AC;? said Matt Green, the councilmemberâ&#x20AC;&#x2122;s deputy chief of staff. â&#x20AC;&#x153;Our office is assisting in the city inspection with Con Edison and the Department of Buildings [DOB] to make sure the work the licensed plumber is doing is

In Michael Harwoodâ&#x20AC;&#x2122;s kitchen at 206 Ninth Ave., the non-functioning gas stove is covered with a plywood panel to support his professional grade hot plate. Nearby, a microwave and toaster oven round out the makeshift cooking setup.

A COOK KEPT ON ICE Photo by Scott Stiffler

Some of the tenants at 336 W. 17th St., where the building has been without gas for nearly 30 months. Top row, L to R: Craig Roseberry and Danny Quinones. Bottom row, L to R: John Martin Gutenkauf and Calder Kusmierski Singer.