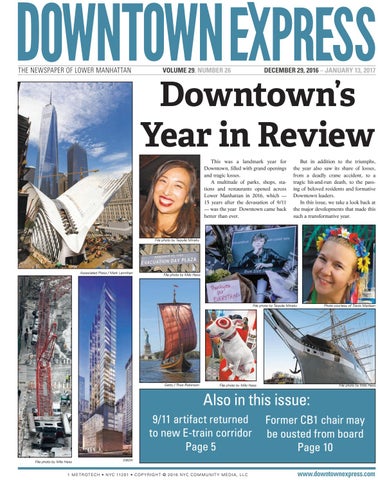 Downtown’s Year in Review This was a landmark year for Downtown, filled with grand openings and tragic losses. A multitude of parks, shops, stations and restaurants opened across Lower Manhattan in 2016, which — 15 years after the devasation of 9/11 — was the year Downtown came back better than ever.

But in addition to the triumphs, the year also saw its share of losses, from a deadly crane accident, to a tragic hit-and-run death, to the passing of beloved residents and formative Downtown leaders. In this issue, we take a look back at the major developments that made this such a transformative year.

Former CB1 chair may be ousted from board Page 10

2016: The Year in Review FIDI NEIGHBORS Residents of the city’s fastest growing neighborhood banded together in January to create the Financial District Neighborhood Association in January, which has since dedicated itself to tackling some of the less charming aspects of Downtown living. Fidi’s population has doubled since the new millennium, and last year saw a massive surge in residential growth, with roughly 5,300 new locals moving in, according to a study by Community Board 1. And with an estimated 44 new Downtown residential developments bringing as many as 6,537 additional units to the neighborhood by 2018, that boom will only continue. But Fidi’s shift from a commercial to a residential area brings with it quality of life woes that are unique to Manhattan’s oldest neighborhood, including gridlock, endless construction, and legendary garbage piles as tall as a man and as long as a city block. The neighborhood association, which hosted its first meeting in February, has grown to about 200 members and continues to pick up steam as the group pursues solutions for the major issues

plaguing locals, by means such as lobbying local legislators to consider new regulations to curb the massive garbage piles, and pushing a petition on Transportation Alternatives calling on the city to fund a comprehensive traffic study of Lower Manhattan.

CRANE CRASH A crane collapsed on Worth St. in Tribeca in February, killing one man and injuring three other people — and led to a laundry list of reforms that have yet to be fully implemented. The 565-foot crane toppled down along Worth St. just before 8:30 a.m. on Feb. 5, leaving a two-block stretch of devastation between Hudson and Church Sts., crushing dozens of cars, damaging four buildings, injuring three people, and crushing 38-year-old mathematician David Wichs. A federal investigation by the U.S. Department of Labor’s Occupational Safety and Health Administration cast blame on contractor Galasso Trucking and Rigging in September, slapping it with $22,448 in fines for operating the crawler crane in high winds that exceeded the machine’s specifications.

The 565-foot crane crashed down along two blocks of Worth St. between Hudson and Church Sts. on Feb. 5, killing one man and injuring three other people.

On the city’s end, an investigation by the Department of Buildings decided earlier this month that fault lay with crane operator Kevin Reilly, suspending his license and pushing for the Office of Administrative Trials and Hearings to revoke it permanently. Meanwhile, the DOB is currently implementing the 23 recommendations made by a working group formed by Mayor de Blasio in June aiming to prevent similar accidents in the future.

the occupation of Lower Manhattan after the Revolutionary War. On Nov. 25 that year, the fleeing Brits had nailed the Union Jack to the top of the flagpole at Bowling Green and then greased the pole, but a patriotic former prisoner of war named John Van Arsdale managed to climb the flagpole and replace it with the Stars and Stripes just before George Washington’s triumphant return to Downtown. The Lower Manhattan Historical Society recently revived the long-dormant tradition of marking Evacuation Day, which was avidly celebrated in New York until about 100 years ago, and pressed the City Council to coname Bowling Green in its honor. But YEAR IN REVIEW Continued on page 4