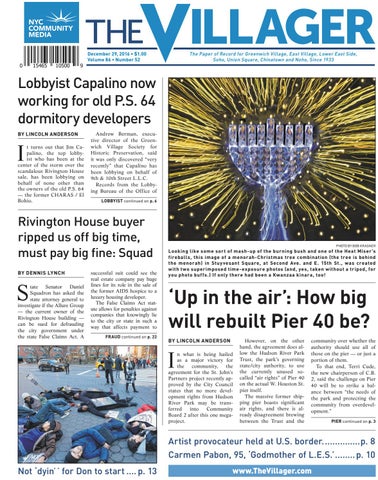 t turns out that Jim Capalino, the top lobbyist who has been at the center of the storm over the scandalous Rivington House sale, has been lobbying on behalf of none other than the owners of the old P.S. 64 — the former CHARAS / El Bohio.

Andrew Berman, executive director of the Greenwich Village Society for Historic Preservation, said it was only discovered “very recently” that Capalino has been lobbying on behalf of 9th & 10th Street L.L.C. Records from the Lobbying Bureau of the Office of LOBBYIST continued on p. 6

tate Senator Daniel Squadron has asked the state attorney general to investigate if the Allure Group — the current owner of the Rivington House building — can be sued for defrauding the city government under the state False Claims Act. A

successful suit could see the real estate company pay huge fines for its role in the sale of the former AIDS hospice to a luxury housing developer. The False Claims Act statute allows for penalties against companies that knowingly lie to the city or state in such a way that affects payment to FRAUD continued on p. 22

Looking like some sor t of mash-up of the burning bush and one of the Heat Miser’s fireballs, this image of a menorah-Christmas tree combination (the tree is behind the menorah) in Stuy vesant Square, at Second Ave. and E. 15th St., was created with t wo superimposed time-exposure photos (and, yes, taken without a tripod, for you photo buffs.) If only there had been a Kwanzaa kinara, too!

‘Up in the air’: How big will rebuilt Pier 40 be? BY LINCOLN ANDERSON

n what is being hailed as a major victory for the community, the agreement for the St. John’s Partners project recently approved by the City Council states that no more development rights from Hudson River Park may be transferred into Community Board 2 after this one megaproject.

However, on the other hand, the agreement does allow the Hudson River Park Trust, the park’s governing state/city authority, to use the currently unused socalled “air rights” of Pier 40 on the actual W. Houston St. pier itself. The massive former shipping pier boasts significant air rights, and there is already disagreement brewing between the Trust and the

community over whether the authority should use all of those on the pier — or just a portion of them. To that end, Terri Cude, the new chairperson of C.B. 2, said the challenge on Pier 40 will be to strike a balance between “the needs of the park and protecting the community from overdevelopment.” PIER continued on p. 3

UNHAPPY LENAPE: The New York Post is reporting that “tribal warfare” has broken out among the local Lenape tribe — Manhattan’s original denizens — over who will get Jean-Louis Bourgeois’s $4 million building on Weehawken St. Bourgeois, the activist scion of the late sculptress Louise Bourgeois, has long said he is in the process of giving the low-rise house to Anthony Van Dunk, a former Lenape chief who plans to convert it into a padamawiikan — or “house of prayer” in Lenape lingo. Hey, this isn’t really new news, though! Scoopy’s Notebook first reported two years ago that Bourgeois was trying to do this. And we have reported on the slow progress toward this goal several times since. Hey, you read it here first! Anyway, we were curious how the Post, which has had two articles on this now in the past couple of weeks, got onto the story. So we called Bourgeois, who recently returned to the West Village from a several-months-long stint out at bitterly cold Standing Rock, where he stood in solidarity with the Lakota and water protectors against the Dakota Access Pipeline — and also kept them in business, providing the protest camp with truckloads of firewood and also hundreds of quirky hats imported from Harlem. The Post reported that Bourgeois’s generosity for the pipeline protesters has been to the tune of $600,000, but he said that’s actually a low-ball figure. When we called Bourgeois and asked him how the Post got onto the Weehawken house story, his friend Jim Drougas, owner of Unoppressive Non-Imperialist Bargain Books, on Carmine St., who happened to be visiting him, piped up that it was him. Drougas is friends with writer Larry “Ratso” Sloman, who is best known for his work on Howard Stern’s two autobiographies, and whose wife, Christy Smith-Sloman, is a freelance writer. Drougas told them about Bourgeois’s activism around the Standing Rock pipeline fight. But Smith-Sloman instead focused on the Weehawken house fight — or maybe that’s what the

Just chillin’: Jean-Louis Bourgeois got a penguin from former Lenape chief Anthony Van Dunk for Christmas. It goes well with his penguin hat — with special ex tra-long ear flaps / neck warmers. Bourgeois bought the bonnets in bulk in Harlem — they may not all be penguins — and has been outfitting the Standing Rock protesters with them to help them brave the Dakota cold. He also is giving them night goggles to catch sneak y law enforcement officers.

Post editors wanted. Who knows? Aww, it’s all good... . Drougas also invited Bourgeois and Van Dunk to an impromptu Christmas gathering at his bookstore, where, as Scoopy source Sharon Woolums reports, Van Dunk gave Bourgeois a stuffed penguin to go with his Harlem penguin hat. As for the feud over the pending sale of the future padamawiikan, Bourgeois said there’s no way he’s going to let rival chief Dwaine Perry get his hands on the house. “I have complete confidence in Anthony,” Bourgeois told us, “and I’m not even gonna talk to the other guy.” Van Dunk has basically been disenfranchised from the tribe after trying to institute some reforms during his recent term as chief. But, hey, once he gets that Village real estate, things could turn around fast, and — who knows? — the tribe might well ditch Perry. “Now that the building is going to be Anthony’s territory, he’s got something to offer — a padamawiikan,” Bourgeois noted. Plus, he added, things could even get a bit more involved before the ownership of the building is settled. “The Lenape are matrilineal, so it will likely be turned over to a group of women,” Bourgeois explained, adding, “That suits me fine since I’m a male feminist. It’s complicated.” Meanwhile, he’ll be heading back out to Standing Rock in North Dakota soon for a ceremony to receive an honorary Lakota name, on Jan. 11. Bourgeois had suggested “Custer Killer” — though admitting he personally didn’t want to kill Custer, and is happy that someone else did it. But the Sioux felt that any name with Custer in it is a bad idea, so he’ll be getting something else. It will be a surprise. And he’s still helping the cause. When we called the other night, he had just received a shipment of more stuff for Standing Rock. “I have just purchased $1,000 worth of night battle gear,” he told us. Payu, a Native American activist friend of Bourgeois’s, explained that this equipment — night-vision goggles and long-range binoculars — was not for doing battle,

Champion Pizza in Nolita is giving free slices to people who come in wearing “Star Wars” attire through this Friday. It wasn’t clear if these patrons were wearing some sor t of “cloaking device,” hiding their sci-fi costumes. Oh, wait...that was “Star Trek”!

but merely seeing “the enemy,” mainly law enforcement, when they try to sneak up on the camp at night. Tribal SCOOPY continued on p. 23 TheVillager.com

Meanwhile, the planned 1.7-million-square-foot St. John’s development will have 1,600 apartments and stretch for three blocks along West and Washington Sts. opposite Pier 40 at W. Houston St. A key part of the project is that its developers have agreed to buy 200,000 square feet of unused air rights from the park’s sprawling 15-acre pier for $100 million. After these development rights are transferred to the St. John’s project, however, Pier 40 will still have an additional 380,000 square feet of unused air rights left. As for the currently “used” air rights on the pier, its existing three-story “donut”-shaped pier-shed structure encloses roughly 760,000 square feet of space. Local youth sports leagues plan to work with the Trust, C.B. 2 and local politicians on a plan for the pier’s

‘We intend to use the remaining development rights on the pier.’ Trust spokesperson

future design that would open up its eastern and western sides, while pushing the pier’s commercial structures to its northern and southern edges. This would actually increase the amount of field space on the pier. The Trust wants to develop commercial office space on the pier, but that would need an amendment in Albany, since the Hudson River Park Act does not currently allow office use at Pier 40. Asked if there are any preliminary design plans for Pier 40 right now, a Trust spokesperson said, “No plans at the moment, but if there were an increase in area for ball fields, some of the [existing] buildings would have to be re-massed.” Whether that means the new structures would be taller — and how much taller — isn’t immediately known, at least not publicly. Theoretically, more floors just could be added within roughly the space of the existing envelope since the current pier shed has very high ceilings. TheVillager.com

Back in September 2012, when the Hudson River Park Trust was exploring building luxur y residential housing and a hotel on Pier 40, a staffer in A ssemblymember Deborah Glick’s Office created this computer illustration, giving a rough sense of how Pier 40 could look with 15-stor y towers added along its nor thern edge. The Trust is now considering developing commercial office space on the nor thern and southern edges of Pier 40. Would it be this tall? No one seems to know yet — or is not saying so publicly.

Air-rights transfers from the 4-milelong West Side waterfront park up to one block inland were unheard of until 2013, when a surprise amendment to the park act at the very end of the Albany legislative session abruptly fl ipped the landscape. However, some people scoff at the very notion that piers should have any air rights at all. Indeed, one skeptical local politician has been heard to utter this in private. Be that as it may, under current city zoning regulations, commercial piers — as opposed to recreational piers — do have development rights. Under the park act, Pier 40 is designated for a mix of recreational and commercial uses; it currently sports heavily used ball fields and a commercial parking operation. The fi nal agreement for the St. John’s project, which was brokered by Councilmember Corey Johnson in early December, states that the park’s unused development rights can only be transferred into the adjacent community board district. So, any air rights from Pier 40 can only be transferred into C.B. 2, whose waterfront boundary stretches between W. 14th and Canal Sts. As for the southern third of the park, in Tribeca, it has no commercial piers, so there will be no air-rights transfers into Community Board 1. Meanwhile, there are commercial PIER continued on p. 5