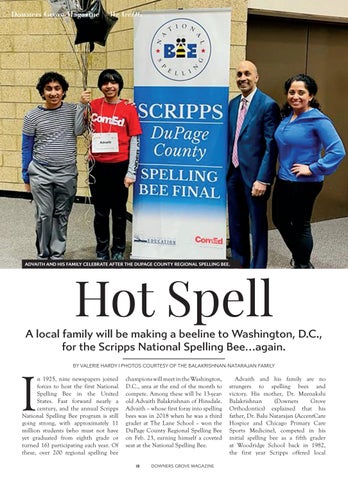 ADVAITH AND HIS FAMILY CELEBRATE AFTER THE DUPAGE COUNTY REGIONAL SPELLING BEE.

A local family will be making a beeline to Washington, D.C., for the Scripps National Spelling Bee…again.

BY VALERIE HARDY I PHOTOS COURTESY OF THE BALAKRISHNAN-NATARAJAN FAMILY

n 1925, nine newspapers joined forces to host the first National Spelling Bee in the United States. Fast forward nearly a century, and the annual Scripps National Spelling Bee program is still going strong, with approximately 11 million students (who must not have yet graduated from eighth grade or turned 16) participating each year. Of these, over 200 regional spelling bee

champions will meet in the Washington, D.C., area at the end of the month to compete. Among these will be 13-yearold Advaith Balakrishnan of Hinsdale. Advaith – whose first foray into spelling bees was in 2018 when he was a third grader at The Lane School – won the DuPage County Regional Spelling Bee on Feb. 23, earning himself a coveted seat at the National Spelling Bee. 18

Advaith and his family are no strangers to spelling bees and victory. His mother, Dr. Meenakshi Balakrishnan (Downers Grove Orthodontics) explained that his father, Dr. Balu Natarajan (AccentCare Hospice and Chicago Primary Care Sports Medicine), competed in his initial spelling bee as a fifth grader at Woodridge School back in 1982, the first year Scripps offered local 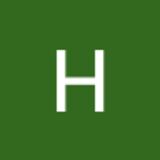