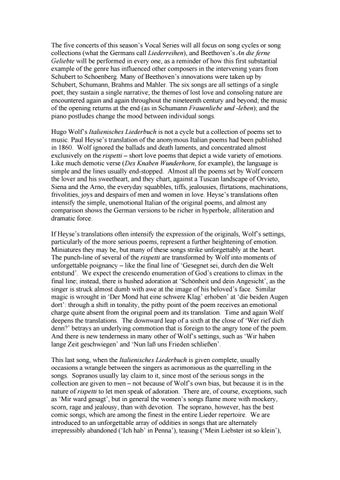 The five concerts of this season’s Vocal Series will all focus on song cycles or song collections (what the Germans call Liederreihen), and Beethoven’s An die ferne Geliebte will be performed in every one, as a reminder of how this first substantial example of the genre has influenced other composers in the intervening years from Schubert to Schoenberg. Many of Beethoven’s innovations were taken up by Schubert, Schumann, Brahms and Mahler. The six songs are all settings of a single poet; they sustain a single narrative; the themes of lost love and consoling nature are encountered again and again throughout the nineteenth century and beyond; the music of the opening returns at the end (as in Schumann Frauenliebe und -leben); and the piano postludes change the mood between individual songs. Hugo Wolf’s Italienisches Liederbuch is not a cycle but a collection of poems set to music. Paul Heyse’s translation of the anonymous Italian poems had been published in 1860. Wolf ignored the ballads and death laments, and concentrated almost exclusively on the rispetti – short love poems that depict a wide variety of emotions. Like much demotic verse (Des Knaben Wunderhorn, for example), the language is simple and the lines usually end-stopped. Almost all the poems set by Wolf concern the lover and his sweetheart, and they chart, against a Tuscan landscape of Orvieto, Siena and the Arno, the everyday squabbles, tiffs, jealousies, flirtations, machinations, frivolities, joys and despairs of men and women in love. Heyse’s translations often intensify the simple, unemotional Italian of the original poems, and almost any comparison shows the German versions to be richer in hyperbole, alliteration and dramatic force. If Heyse’s translations often intensify the expression of the originals, Wolf’s settings, particularly of the more serious poems, represent a further heightening of emotion. Miniatures they may be, but many of these songs strike unforgettably at the heart. The punch-line of several of the rispetti are transformed by Wolf into moments of unforgettable poignancy – like the final line of ‘Gesegnet sei, durch den die Welt entstund’. We expect the crescendo enumeration of God’s creations to climax in the final line; instead, there is hushed adoration at ‘Schönheit und dein Angesicht’, as the singer is struck almost dumb with awe at the image of his beloved’s face. Similar magic is wrought in ‘Der Mond hat eine schwere Klag’ erhoben’ at ‘die beiden Augen dort’: through a shift in tonality, the pithy point of the poem receives an emotional charge quite absent from the original poem and its translation. Time and again Wolf deepens the translations. The downward leap of a sixth at the close of ‘Wer rief dich denn?’ betrays an underlying commotion that is foreign to the angry tone of the poem. And there is new tenderness in many other of Wolf’s settings, such as ‘Wir haben lange Zeit geschwiegen’ and ‘Nun laß uns Frieden schließen’. This last song, when the Italienisches Liederbuch is given complete, usually occasions a wrangle between the singers as acrimonious as the quarrelling in the songs. Sopranos usually lay claim to it, since most of the serious songs in the collection are given to men – not because of Wolf’s own bias, but because it is in the nature of rispetti to let men speak of adoration. There are, of course, exceptions, such as ‘Mir ward gesagt’, but in general the women’s songs flame more with mockery, scorn, rage and jealousy, than with devotion. The soprano, however, has the best comic songs, which are among the finest in the entire Lieder repertoire. We are introduced to an unforgettable array of oddities in songs that are alternately irrepressibly abandoned (‘Ich hab’ in Penna’), teasing (‘Mein Liebster ist so klein’),

dead-pan (‘Ihr jungen Leute’), affectionate (‘Mein Liebster hat zu Tische’). ‘Not without humour’ is Wolf’s indication to his interpreters in ‘Wie lange schon’ – and there can hardly be a more comic postlude than this wretched musician’s laborious trill. The Italienisches Liederbuch is unlike any of Wolf’s other collections. The opening song – No. 16 in order of composition – states that ‘even small things can delight us’, and Wolf presumably opened his final songbook with ‘Auch kleine Dinge’ to indicate the miniature form of these songs. Of forty-six, only six are three pages long, the majority occupy a mere two pages, while two songs (‘Heut’ Nacht erhob ich mich’ and ‘Nicht länger kann ich singen’) fill a single page. The volume contains no grandscale songs like Goethe’s ‘Prometheus’ or Mörike’s ‘Der Feuerreiter’, there are no passionate songs like ‘Kennst du das Land’, no religious fervour, as in the Spanisches Liederbuch, no introspection to match the Harper’s songs. Yet there is an Innigkeit, an emotional immediacy about them and an understanding of the human heart that is in no way diminished by the miniature form. Because Wolf never heard a complete performance of his Italienisches Liederbuch, no established performing tradition developed during his lifetime. In the years since his death, there have been several ways of performing this great work. The songs are sometimes grouped according to literary provenance: the poems from Tommaseo’s Canti popolari, Tigri’s Canti popolari Toscani, Marcoaldi’s Canti popolari inediti and Dalmedico’s Canti del popolo Veneziano being performed separately. Another possibility is to perform the songs in their order of composition – which means starting, not with ‘Auch kleine Dinge’ (9 December 1891) but with ‘Mir ward gesagt, du reisest in die Ferne’ (25 September 1890). The most traditional way is to perform the songs in the order that Wolf himself chose in the two volumes published during his lifetime: Part I in 1891 and Part II in 1896. But there is another possibility. Singers and pianists often concoct an entertaining order of their own, shuffling the songs in a dramatic way, so that lover replies to sweetheart and vice versa – and that is what we shall hear this evening. Richard Stokes © 2019