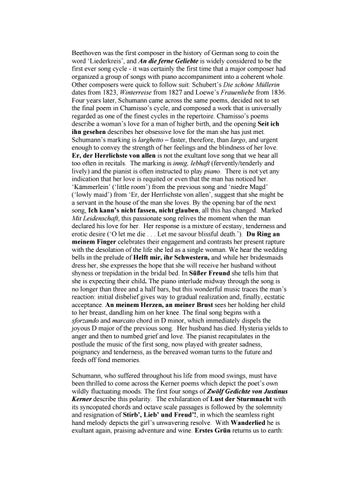 Beethoven was the first composer in the history of German song to coin the word ‘Liederkreis’, and An die ferne Geliebte is widely considered to be the first ever song cycle - it was certainly the first time that a major composer had organized a group of songs with piano accompaniment into a coherent whole. Other composers were quick to follow suit: Schubert’s Die schöne Müllerin dates from 1823, Winterreise from 1827 and Loewe’s Frauenliebe from 1836. Four years later, Schumann came across the same poems, decided not to set the final poem in Chamisso’s cycle, and composed a work that is universally regarded as one of the finest cycles in the repertoire. Chamisso’s poems describe a woman’s love for a man of higher birth, and the opening Seit ich ihn gesehen describes her obsessive love for the man she has just met. Schumann’s marking is larghetto – faster, therefore, than largo, and urgent enough to convey the strength of her feelings and the blindness of her love. Er, der Herrlichste von allen is not the exultant love song that we hear all too often in recitals. The marking is innig, lebhaft (fervently/tenderly and lively) and the pianist is often instructed to play piano. There is not yet any indication that her love is requited or even that the man has noticed her. ‘Kämmerlein’ (‘little room’) from the previous song and ‘niedre Magd’ (‘lowly maid’) from ‘Er, der Herrlichste von allen’, suggest that she might be a servant in the house of the man she loves. By the opening bar of the next song, Ich kann’s nicht fassen, nicht glauben, all this has changed. Marked Mit Leidenschaft, this passionate song relives the moment when the man declared his love for her. Her response is a mixture of ecstasy, tenderness and erotic desire (‘O let me die . . . Let me savour blissful death.’). Du Ring an meinem Finger celebrates their engagement and contrasts her present rapture with the desolation of the life she led as a single woman. We hear the wedding bells in the prelude of Helft mir, ihr Schwestern, and while her bridesmaids dress her, she expresses the hope that she will receive her husband without shyness or trepidation in the bridal bed. In Süßer Freund she tells him that she is expecting their child. The piano interlude midway through the song is no longer than three and a half bars, but this wonderful music traces the man’s reaction: initial disbelief gives way to gradual realization and, finally, ecstatic acceptance. An meinem Herzen, an meiner Brust sees her holding her child to her breast, dandling him on her knee. The final song begins with a sforzando and marcato chord in D minor, which immediately dispels the joyous D major of the previous song. Her husband has died. Hysteria yields to anger and then to numbed grief and love. The pianist recapitulates in the postlude the music of the first song, now played with greater sadness, poignancy and tenderness, as the bereaved woman turns to the future and feeds off fond memories. Schumann, who suffered throughout his life from mood swings, must have been thrilled to come across the Kerner poems which depict the poet’s own wildly fluctuating moods. The first four songs of Zwölf Gedichte von Justinus Kerner describe this polarity. The exhilaration of Lust der Sturmnacht with its syncopated chords and octave scale passages is followed by the solemnity and resignation of Stirb’, Lieb’ und Freud’!, in which the seamless right hand melody depicts the girl’s unwavering resolve. With Wanderlied he is exultant again, praising adventure and wine. Erstes Grün returns us to earth:

the song wistfully juxtaposes G minor and G major: human inferiority is contrasted with nature. The postlude, after a moment’s doubt, finally reestablishes the composer’s belief in the restorative properties of nature. Kerner’s last stanza, with its hint of consoling death, reminds us how disparaging Schumann could be about human kind. Sehnsucht nach der Waldgegend was a great favourite of Clara and Brahms, and the song was given to Clara as a Christmas present in 1840. Auf das Trinkglas eines verstorbenen Freundes laments the death of Schumann’s friend Ludwig Schuncke and at the same time expresses the composer’s love of German wine. It opens conventionally enough in E flat, but at the words ‘Jetzt sollst du mir gefüllet sein’, there is a lovely shift to D flat, as the poem ponders the mysterious bond between the dead and the living. This magical song is followed by Wanderung, which, after a horn call on the piano, sends the traveller light-heartedly on his way. It is the last light-hearted moment in the work. For Schumann, after initial lurchings between ecstasy and grief, lingers now in the land of despair. Stille Liebe depicts the inability of the poet to capture the essence of his beloved; Frage starts off in E flat, the key of ‘Stille Liebe’, and ends in C, thus introducing the key of the next song, Stille Tränen, one of Schumann’s most expansive. And so we come to the final pair of songs – the bleakest end to any song-cycle or Liederreihe, excepting, perhaps, ‘Der Leiermann’ from Winterreise. Schumann set them to virtually identical music, and for this reason omitted the third verse of Kerner’s Wer machte dich so krank? to match the length of Alte Laute. The first poem reiterates the misanthropy to which Schumann had responded so readily in ‘Erstes Grün’ and which surfaces intermittently in his correspondence. This misanthropy is not, however, matched by a similar hatred of nature. The question ‘Who made you ill?’ is followed by a succession of six negatives: nature was not responsible. So when the final song of the cycle is ushered in by the birdsong-like prelude, we are led to believe that nature still has the power to restore. Such hopes, however, prove illusory, as the numb little tune of ‘Wer machte dich so krank’ returns ‘even softer and slower’. This repeat is a stroke of genius and provides a conclusion that is as poignant as the closing bars of Dichterliebe or Frauenliebe und -leben. Richard Stokes © 2019