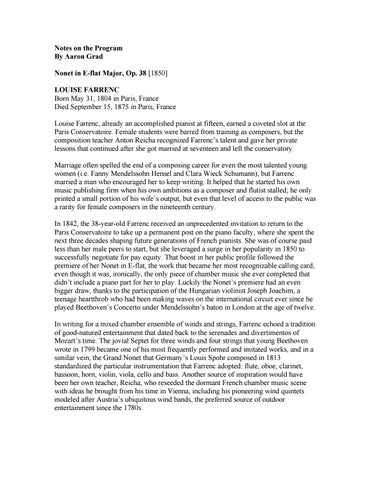 Notes on the Program By Aaron Grad Nonet in E-flat Major, Op. 38 [1850] LOUISE FARRENC Born May 31, 1804 in Paris, France Died September 15, 1875 in Paris, France Louise Farrenc, already an accomplished pianist at fifteen, earned a coveted slot at the Paris Conservatoire. Female students were barred from training as composers, but the composition teacher Anton Reicha recognized Farrenc’s talent and gave her private lessons that continued after she got married at seventeen and left the conservatory. Marriage often spelled the end of a composing career for even the most talented young women (i.e. Fanny Mendelssohn Hensel and Clara Wieck Schumann), but Farrenc married a man who encouraged her to keep writing. It helped that he started his own music publishing firm when his own ambitions as a composer and flutist stalled; he only printed a small portion of his wife’s output, but even that level of access to the public was a rarity for female composers in the nineteenth century. In 1842, the 38-year-old Farrenc received an unprecedented invitation to return to the Paris Conservatoire to take up a permanent post on the piano faculty, where she spent the next three decades shaping future generations of French pianists. She was of course paid less than her male peers to start, but she leveraged a surge in her popularity in 1850 to successfully negotiate for pay equity. That boost in her public profile followed the premiere of her Nonet in E-flat, the work that became her most recognizable calling card, even though it was, ironically, the only piece of chamber music she ever completed that didn’t include a piano part for her to play. Luckily the Nonet’s premiere had an even bigger draw, thanks to the participation of the Hungarian violinist Joseph Joachim, a teenage heartthrob who had been making waves on the international circuit ever since he played Beethoven’s Concerto under Mendelssohn’s baton in London at the age of twelve. In writing for a mixed chamber ensemble of winds and strings, Farrenc echoed a tradition of good-natured entertainment that dated back to the serenades and divertimentos of Mozart’s time. The jovial Septet for three winds and four strings that young Beethoven wrote in 1799 became one of his most frequently performed and imitated works, and in a similar vein, the Grand Nonet that Germany’s Louis Spohr composed in 1813 standardized the particular instrumentation that Farrenc adopted: flute, oboe, clarinet, bassoon, horn, violin, viola, cello and bass. Another source of inspiration would have been her own teacher, Reicha, who reseeded the dormant French chamber music scene with ideas he brought from his time in Vienna, including his pioneering wind quintets modeled after Austria’s ubiquitous wind bands, the preferred source of outdoor entertainment since the 1780s.

This is all to say that Farrenc was not attempting anything radical in her Nonet, but we should not confuse novelty with quality. What she accomplished, using means that would have been familiar to composers at least a generation older than her, was a work of exceptional balance and clarity, starting with a noble introduction that links to an effortlessly tuneful Allegro. (Another model worth mentioning here is Schubert, who showed a similar propensity to flesh out his chamber music textures with the type of broken-chord patterns that are deeply ingrained in any good pianist’s muscle memory.) With so many instruments to feature, Farrenc made a wise choice in the slow movement to adopt the theme-and-variations format that was a staple of the Classical masters. The second variation is especially delightful with its quick arpeggios that get tossed from voice to voice like a hot potato. The bewitching third movement, tiptoeing in with plucked strings in the key of C minor, suggesting an affinity with Mendelssohn’s levitating scherzos, offset by more grounded and dance-like music in the contrasting trio section. To begin the finale, another slow introduction uses old-fashioned dotted rhythms, a marker for ceremonial grandeur that French composers had leaned on for more 150 years—offering yet more evidence of Farrenc’s fluency and comfort in mining the past. Octet for Strings, Op. 20 [1825] FELIX MENDELSSOHN Born February 3, 1809 in Hamburg, Germany Died November 4, 1847 in Leipzig, Germany Growing up in a privileged family of bankers in Berlin, Mendelssohn often played chamber music at home with the best young musicians in the city. Piano was his primary instrument, but he could comfortably handle violin and viola parts as well, thanks to his years of study with Eduard Rietz, a prodigy who became the concertmaster of the Berlin court orchestra at 17, and who remained a close ally of Mendelssohn (who was just seven years younger) until the violinist died at the age of 29. In 1825, the 16-year-old Mendelssohn gave his friend and teacher a most precious birthday present: the Octet for Strings. The German composer Louis Spohr had published a work for two string quartets earlier that year, and Mendelssohn might have been aware of it, but his approach in the Octet was wholly original, treating it as one unified ensemble instead of two opposing groups. The symphonic grandeur of the music is apparent from the outset, with the first violinist rising over a saturated bed of slurred tremolos and pulsing off-beats. It would be easy for this profusion of textures to get messy and clouded, but Mendelssohn’s lucid orchestration only intensifies the deft progress through the large sonata form, a structure dispatched with the fluidity of Bach and the rigor of Beethoven.

To counter the fiery first movement, the Andante establishes a consoling tone, its sparing themes steeped in old church harmonies and resonant drones. For the lighter-than-air Scherzo, which must be played “always pianissimo and staccato,” Mendelssohn found inspiration in a dreamy episode from Goethe’s Faust. Some of that music crops up again in the manic finale, a contrapuntal wonder made possible by the young composer’s years of practice in the neglected art of fugue writing. © 2019 Aaron Grad.