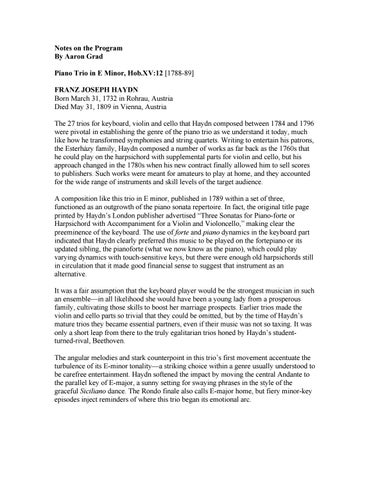 Notes on the Program By Aaron Grad Piano Trio in E Minor, Hob.XV:12 [1788-89] FRANZ JOSEPH HAYDN Born March 31, 1732 in Rohrau, Austria Died May 31, 1809 in Vienna, Austria The 27 trios for keyboard, violin and cello that Haydn composed between 1784 and 1796 were pivotal in establishing the genre of the piano trio as we understand it today, much like how he transformed symphonies and string quartets. Writing to entertain his patrons, the Esterházy family, Haydn composed a number of works as far back as the 1760s that he could play on the harpsichord with supplemental parts for violin and cello, but his approach changed in the 1780s when his new contract finally allowed him to sell scores to publishers. Such works were meant for amateurs to play at home, and they accounted for the wide range of instruments and skill levels of the target audience. A composition like this trio in E minor, published in 1789 within a set of three, functioned as an outgrowth of the piano sonata repertoire. In fact, the original title page printed by Haydn’s London publisher advertised “Three Sonatas for Piano-forte or Harpsichord with Accompaniment for a Violin and Violoncello,” making clear the preeminence of the keyboard. The use of forte and piano dynamics in the keyboard part indicated that Haydn clearly preferred this music to be played on the fortepiano or its updated sibling, the pianoforte (what we now know as the piano), which could play varying dynamics with touch-sensitive keys, but there were enough old harpsichords still in circulation that it made good financial sense to suggest that instrument as an alternative. It was a fair assumption that the keyboard player would be the strongest musician in such an ensemble—in all likelihood she would have been a young lady from a prosperous family, cultivating those skills to boost her marriage prospects. Earlier trios made the violin and cello parts so trivial that they could be omitted, but by the time of Haydn’s mature trios they became essential partners, even if their music was not so taxing. It was only a short leap from there to the truly egalitarian trios honed by Haydn’s studentturned-rival, Beethoven. The angular melodies and stark counterpoint in this trio’s first movement accentuate the turbulence of its E-minor tonality—a striking choice within a genre usually understood to be carefree entertainment. Haydn softened the impact by moving the central Andante to the parallel key of E-major, a sunny setting for swaying phrases in the style of the graceful Siciliano dance. The Rondo finale also calls E-major home, but fiery minor-key episodes inject reminders of where this trio began its emotional arc.

Piano Trio No. 3 in C Minor, Op. 101 [1886] JOHANNES BRAHMS Born May 7, 1833 in Hamburg, Germany Died April 3, 1897 in Vienna, Austria “You can’t have any idea what it’s like always to hear such a giant marching behind you,” Brahms once wrote about Beethoven, whose towering legacy scared Brahms off from releasing any string quartets or symphonies until he was in his forties. More than any other composer, it was Beethoven who provided the model for Brahms as his style became increasingly clear and focused, and arguably no work goes further in this direction than the Third Piano Trio from 1886, lasting a scant 21 minutes, and set in the same key of C-minor that Beethoven used for his most fateful music. The first movement, marked “Fast and energetic,” begins at full intensity. The dotted rhythms create an aggressive, martial attitude, while the contrasting theme is introduced in skeletal octaves that strip away any sentimentality. Without the usual repeat of the exposition and with the remaining sections of the sonata-allegro form compressed, this opening movement is all muscle and no fat. In the second movement, muted strings and leaping plucks impart a hushed, ghostly tone. Again the textures and harmonies are left as transparent as possible, with clean octaves and sparse triads favored over thick chords. Through much of the Andante grazioso slow movement, the instruments maintain an austere separation, with duet phrases from violin and cello alternating with piano responses. The finale continues this trio’s fascination with rhythmic surprises, using devious hiccups in the phrasing to give the initial triplet theme extra momentum. A final coda arrives triumphantly in C major, completing the same journey from dark to light as Beethoven’s Fifth Symphony. Piano Trio in B-Flat Major, Op. 97 (“Archduke”) [1811] LUDWIG VAN BEETHOVEN Born December 1770 in Bonn, Germany Died March 26, 1827 in Vienna, Austria When Beethoven completed this Piano Trio in B-flat Major in 1811, he dedicated it to the emperor’s younger brother, Archduke Rudolf, who was not just one of the composer’s most generous patrons but also a former piano student and, above all, a lifelong friend. By the time of its first performance in Vienna in 1814, Beethoven was at the peak of his fame, buoyed by a revival of the opera Fidelio and the recent premieres of his “Battle” Symphony and Seventh Symphony. At the same time, his advancing deafness finally forced him to accept the inevitable: After the trio’s debut, he never played piano in public again.

Dating from a period in which Beethoven wrote some of his most concise and singleminded music—i.e. the Fifth Symphony with its indelible “fate” motive, or the ultraconcentrated “Serioso” String Quartet—the “Archduke” Trio is uncommonly expansive and melodic. Starting with its first theme in the piano part, to be played quietly and sweetly (piano dolce), phrases stretch out gracefully in the ample opening movement, and even the most adventurous harmonic excursions preserve an overall impression of grace and nobility. The middle movements reverse the customary order, placing the Scherzo first. In the central trio section and matching coda, chromatic counterpoint contrasts with the peppy humor of the primary material. For the slow movement, the piano again takes the lead with a beautiful and humble opening melody, this one marked “simple,” which serves as the basis for a spacious set of variations. A jolting forte outburst breaks the spell of the slow movement and ushers in the rondo finale, which once again lets the piano introduce the main theme, this one marked dolce. Perhaps all of these dignified melodies featuring the piano were a sign of Beethoven’s high regard for the loyal friend and accomplished musician whose noble title lives on in this trio’s nickname. © 2019 Aaron Grad.