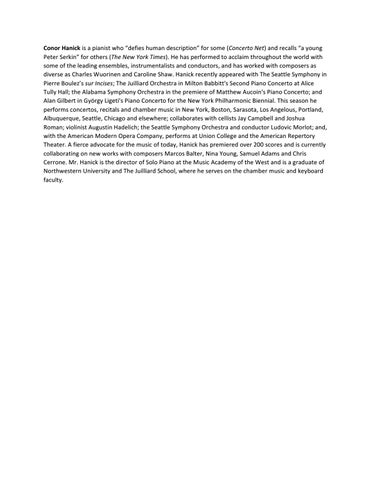 Conor Hanick is a pianist who “defies human description” for some (Concerto Net) and recalls “a young Peter Serkin” for others (The New York Times). He has performed to acclaim throughout the world with some of the leading ensembles, instrumentalists and conductors, and has worked with composers as diverse as Charles Wuorinen and Caroline Shaw. Hanick recently appeared with The Seattle Symphony in Pierre Boulez’s sur Incises; The Juilliard Orchestra in Milton Babbitt's Second Piano Concerto at Alice Tully Hall; the Alabama Symphony Orchestra in the premiere of Matthew Aucoin's Piano Concerto; and Alan Gilbert in György Ligeti's Piano Concerto for the New York Philharmonic Biennial. This season he performs concertos, recitals and chamber music in New York, Boston, Sarasota, Los Angelous, Portland, Albuquerque, Seattle, Chicago and elsewhere; collaborates with cellists Jay Campbell and Joshua Roman; violinist Augustin Hadelich; the Seattle Symphony Orchestra and conductor Ludovic Morlot; and, with the American Modern Opera Company, performs at Union College and the American Repertory Theater. A fierce advocate for the music of today, Hanick has premiered over 200 scores and is currently collaborating on new works with composers Marcos Balter, Nina Young, Samuel Adams and Chris Cerrone. Mr. Hanick is the director of Solo Piano at the Music Academy of the West and is a graduate of Northwestern University and The Juilliard School, where he serves on the chamber music and keyboard faculty.