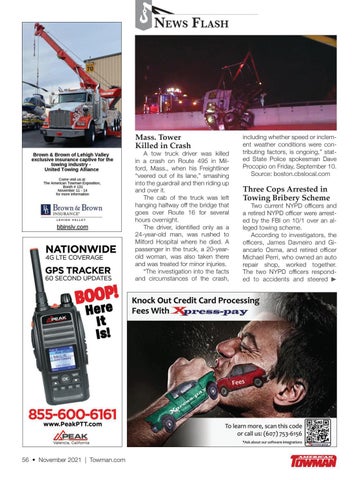 A tow truck driver was killed in a crash on Route 495 in Milford, Mass., when his Freightliner “veered out of its lane,” smashing into the guardrail and then riding up and over it. The cab of the truck was left hanging halfway off the bridge that goes over Route 16 for several hours overnight. The driver, identified only as a 24-year-old man, was rushed to Milford Hospital where he died. A passenger in the truck, a 20-yearold woman, was also taken there and was treated for minor injuries. “The investigation into the facts and circumstances of the crash,

Two current NYPD officers and a retired NYPD officer were arrested by the FBI on 10/1 over an alleged towing scheme. According to investigators, the officers, James Davneiro and Giancarlo Osma, and retired officer Michael Perri, who owned an auto repair shop, worked together. The two NYPD officers responded to accidents and steered