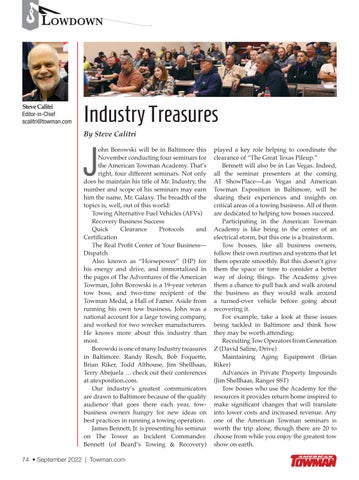 ohn Borowski will be in Baltimore this November conducting four seminars for the American Towman Academy. That’s right, four different seminars. Not only does he maintain his title of Mr. Industry, the number and scope of his seminars may earn him the name, Mr. Galaxy. The breadth of the topics is, well, out of this world: Towing Alternative Fuel Vehicles (AFVs) Recovery Business Success Quick Clearance Protocols and Certification The Real Profit Center of Your Business— Dispatch Also known as “Horsepower” (HP) for his energy and drive, and immortalized in the pages of The Adventures of the American Towman, John Borowski is a 19-year veteran tow boss, and two-time recipient of the Towman Medal, a Hall of Famer. Aside from running his own tow business, John was a national account for a large towing company, and worked for two wrecker manufacturers. He knows more about this industry than most. Borowski is one of many Industry treasures in Baltimore. Randy Resch, Bob Foquette, Brian Riker, Todd Althouse, Jim Shellhaas, Terry Abejuela … check out their conferences at atexposition.com. Our industry’s greatest communicators are drawn to Baltimore because of the quality audience that goes there each year, towbusiness owners hungry for new ideas on best practices in running a towing operation. James Bennett, Jr. is presenting his seminar on The Tower as Incident Commander. Bennett (of Beard’s Towing &amp; Recovery)

played a key role helping to coordinate the clearance of “The Great Texas Pileup.” Bennett will also be in Las Vegas. Indeed, all the seminar presenters at the coming AT ShowPlace—Las Vegas and American Towman Exposition in Baltimore, will be sharing their experiences and insights on critical areas of a towing business. All of them are dedicated to helping tow bosses succeed. Participating in the American Towman Academy is like being in the center of an electrical storm, but this one is a brainstorm. Tow bosses, like all business owners, follow their own routines and systems that let them operate smoothly. But this doesn’t give them the space or time to consider a better way of doing things. The Academy gives them a chance to pull back and walk around the business as they would walk around a turned-over vehicle before going about recovering it. For example, take a look at these issues being tackled in Baltimore and think how they may be worth attending: Recruiting Tow Operators from Generation Z (David Saline, Drive) Maintaining Aging Equipment (Brian Riker) Advances in Private Property Impounds (Jim Shellhaas, Ranger SST) Tow bosses who use the Academy for the resources it provides return home inspired to make significant changes that will translate into lower costs and increased revenue. Any one of the American Towman seminars is worth the trip alone, though there are 20 to choose from while you enjoy the greatest tow show on earth.