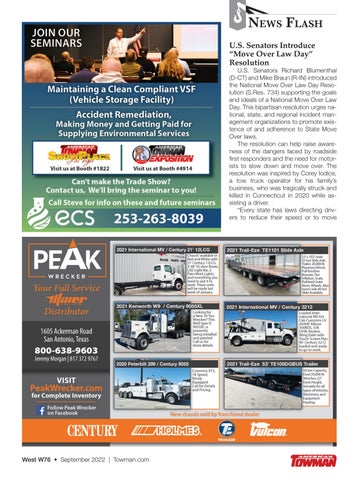 U.S. Senators Richard Blumenthal (D-CT) and Mike Braun (R-IN) introduced the National Move Over Law Day Resolution (S.Res. 734) supporting the goals and ideals of a National Move Over Law Day. This bipartisan resolution urges national, state, and regional incident management organizations to promote existence of and adherence to State Move Over laws. The resolution can help raise awareness of the dangers faced by roadside first responders and the need for motorists to slow down and move over. The resolution was inspired by Corey Iodice, a tow truck operator for his family’s business, who was tragically struck and killed in Connecticut in 2020 while assisting a driver. “Every state has laws directing drivers to reduce their speed or to move