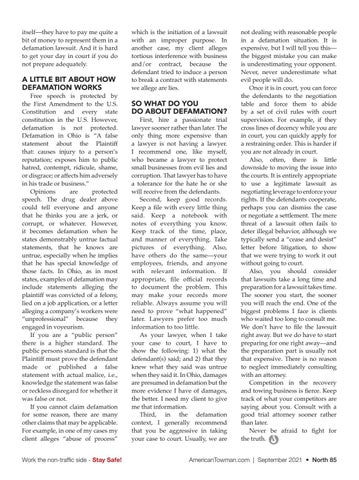 itself—they have to pay me quite a bit of money to represent them in a defamation lawsuit. And it is hard to get your day in court if you do not prepare adequately.

A LITTLE BIT ABOUT HOW DEFAMATION WORKS

Free speech is protected by the First Amendment to the U.S. Constitution and every state constitution in the U.S. However, defamation is not protected. Defamation in Ohio is “A false statement about the Plaintiff that: causes injury to a person’s reputation; exposes him to public hatred, contempt, ridicule, shame, or disgrace; or affects him adversely in his trade or business.” Opinions are protected speech. The drug dealer above could tell everyone and anyone that he thinks you are a jerk, or corrupt, or whatever. However, it becomes defamation when he states demonstrably untrue factual statements, that he knows are untrue, especially when he implies that he has special knowledge of those facts. In Ohio, as in most states, examples of defamation may include statements alleging the plaintiff was convicted of a felony, lied on a job application, or a letter alleging a company’s workers were “unprofessional” because they engaged in voyeurism. If you are a “public person” there is a higher standard. The public persons standard is that the Plaintiff must prove the defendant made or published a false statement with actual malice, i.e., knowledge the statement was false or reckless disregard for whether it was false or not. If you cannot claim defamation for some reason, there are many other claims that may be applicable. For example, in one of my cases my client alleges “abuse of process” Work the non-traffic side - Stay Safe!

which is the initiation of a lawsuit with an improper purpose. In another case, my client alleges tortious interference with business and/or contract, because the defendant tried to induce a person to break a contract with statements we allege are lies.

First, hire a passionate trial lawyer sooner rather than later. The only thing more expensive than a lawyer is not having a lawyer. I recommend one, like myself, who became a lawyer to protect small businesses from evil lies and corruption. That lawyer has to have a tolerance for the hate he or she will receive from the defendants. Second, keep good records. Keep a file with every little thing said. Keep a notebook with notes of everything you know. Keep track of the time, place, and manner of everything. Take pictures of everything. Also, have others do the same—your employees, friends, and anyone with relevant information. If appropriate, file official records to document the problem. This may make your records more reliable. Always assume you will need to prove “what happened” later. Lawyers prefer too much information to too little. As your lawyer, when I take your case to court, I have to show the following: 1) what the defendant(s) said; and 2) that they knew what they said was untrue when they said it. In Ohio, damages are presumed in defamation but the more evidence I have of damages, the better. I need my client to give me that information. Third, in the defamation context, I generally recommend that you be aggressive in taking your case to court. Usually, we are

not dealing with reasonable people in a defamation situation. It is expensive, but I will tell you this— the biggest mistake you can make is underestimating your opponent. Never, never underestimate what evil people will do. Once it is in court, you can force the defendants to the negotiation table and force them to abide by a set of civil rules with court supervision. For example, if they cross lines of decency while you are in court, you can quickly apply for a restraining order. This is harder if you are not already in court. Also, often, there is little downside to moving the issue into the courts. It is entirely appropriate to use a legitimate lawsuit as negotiating leverage to enforce your rights. If the defendants cooperate, perhaps you can dismiss the case or negotiate a settlement. The mere threat of a lawsuit often fails to deter illegal behavior, although we typically send a “cease and desist” letter before litigation, to show that we were trying to work it out without going to court. Also, you should consider that lawsuits take a long time and preparation for a lawsuit takes time. The sooner you start, the sooner you will reach the end. One of the biggest problems I face is clients who waited too long to consult me. We don’t have to file the lawsuit right away. But we do have to start preparing for one right away—and the preparation part is usually not that expensive. There is no reason to neglect immediately consulting with an attorney. Competition in the recovery and towing business is fierce. Keep track of what your competitors are saying about you. Consult with a good trial attorney sooner rather than later. Never be afraid to fight for the truth.