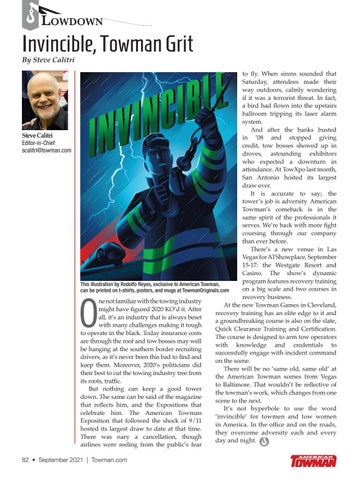 to fly. When sirens sounded that Saturday, attendees made their way outdoors, calmly wondering if it was a terrorist threat. In fact, a bird had flown into the upstairs ballroom tripping its laser alarm system. And after the banks busted in ’08 and stopped giving credit, tow bosses showed up in droves, astounding exhibitors who expected a downturn in attendance. At TowXpo last month, San Antonio hosted its largest draw ever. It is accurate to say; the tower’s job is adversity. American Towman’s comeback is in the same spirit of the professionals it serves. We’re back with more fight coursing through our company than ever before. There’s a new venue in Las Vegas for ATShowplace, September 15-17: the Westgate Resort and Casino. The show’s dynamic program features recovery training This illustration by Rodolfo Reyes, exclusive to American Towman, on a big scale and two courses in can be printed on t-shirts, posters, and mugs at TowmanOriginals.com recovery business. ne not familiar with the towing industry At the new Towman Games in Cleveland, might have figured 2020 KO’d it. After recovery training has an elite edge to it and all, it’s an industry that is always beset a groundbreaking course is also on the slate, with many challenges making it tough Quick Clearance Training and Certification. to operate in the black. Today insurance costs The course is designed to arm tow operators are through the roof and tow bosses may well with knowledge and credentials to be hanging at the southern border recruiting successfully engage with incident command drivers, as it’s never been this bad to find and on the scene. keep them. Moreover, 2020’s politicians did There will be no ‘same old, same old’ at their best to cut the towing industry tree from the American Towman scenes from Vegas its roots, traffic. to Baltimore. That wouldn’t be reflective of But nothing can keep a good tower the towman’s work, which changes from one down. The same can be said of the magazine scene to the next. that reflects him, and the Expositions that It’s not hyperbole to use the word celebrate him. The American Towman ‘invincible’ for towmen and tow women Exposition that followed the shock of 9/11 in America. In the office and on the roads, hosted its largest draw to date at that time. they overcome adversity each and every There was nary a cancellation, though day and night. airlines were reeling from the public’s fear