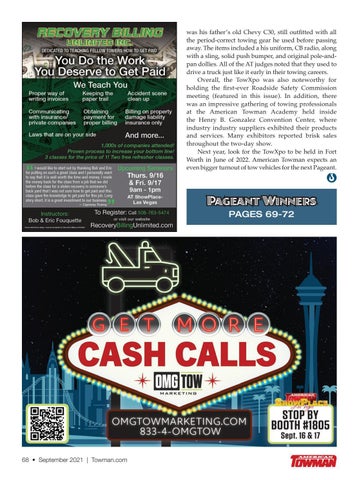 was his father’s old Chevy C30, still outfitted with all the period-correct towing gear he used before passing away. The items included a his uniform, CB radio, along with a sling, solid push bumper, and original pole-andpan dollies. All of the AT judges noted that they used to drive a truck just like it early in their towing careers. Overall, the TowXpo was also noteworthy for holding the first-ever Roadside Safety Commission meeting (featured in this issue). In addition, there was an impressive gathering of towing professionals at the American Towman Academy held inside the Henry B. Gonzalez Convention Center, where industry industry suppliers exhibited their products and services. Many exhibitors reported brisk sales throughout the two-day show. Next year, look for the TowXpo to be held in Fort Worth in June of 2022. American Towman expects an even bigger turnout of tow vehicles for the next Pageant.