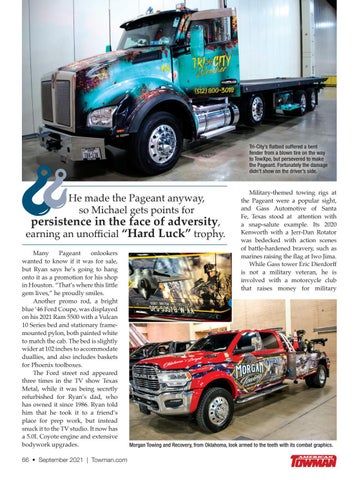 Tri-City’s flatbed suffered a bent fender from a blown tire on the way to TowXpo, but persevered to make the Pageant. Fortunately the damage didn’t show on the driver’s side.

He made the Pageant anyway, so Michael gets points for

persistence in the face of adversity, earning an unofficial “Hard Luck” trophy.

Many Pageant onlookers wanted to know if it was for sale, but Ryan says he’s going to hang onto it as a promotion for his shop in Houston. “That’s where this little gem lives,” he proudly smiles. Another promo rod, a bright blue ’46 Ford Coupe, was displayed on his 2021 Ram 5500 with a Vulcan 10 Series bed and stationary framemounted pylon, both painted white to match the cab. The bed is slightly wider at 102 inches to accommodate duallies, and also includes baskets for Phoenix toolboxes. The Ford street rod appeared three times in the TV show Texas Metal, while it was being secretly refurbished for Ryan’s dad, who has owned it since 1986. Ryan told him that he took it to a friend’s place for prep work, but instead snuck it to the TV studio. It now has a 5.0L Coyote engine and extensive bodywork upgrades. 66 • September 2021 | Towman.com

Military-themed towing rigs at the Pageant were a popular sight, and Gass Automotive of Santa Fe, Texas stood at attention with a snap-salute example. Its 2020 Kenworth with a Jerr-Dan Rotator was bedecked with action scenes of battle-hardened bravery, such as marines raising the flag at Iwo Jima. While Gass tower Eric Dierdorff is not a military veteran, he is involved with a motorcycle club that raises money for military

Morgan Towing and Recovery, from Oklahoma, look armed to the teeth with its combat graphics.