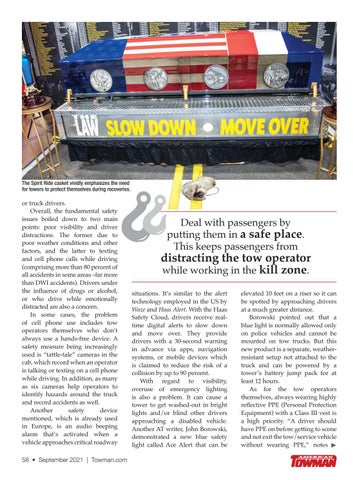 The Spirit Ride casket vividly emphasizes the need for towers to protect themselves during recoveries.

or truck drivers. Overall, the fundamental safety issues boiled down to two main points: poor visibility and driver distractions. The former due to poor weather conditions and other factors, and the latter to texting and cell phone calls while driving (comprising more than 80 percent of all accidents in some areas –far more than DWI accidents). Drivers under the influence of drugs or alcohol, or who drive while emotionally distracted are also a concern. In some cases, the problem of cell phone use includes tow operators themselves who don’t always use a hands-free device. A safety measure being increasingly used is “tattle-tale” cameras in the cab, which record when an operator is talking or texting on a cell phone while driving. In addition, as many as six cameras help operators to identify hazards around the truck and record accidents as well. Another safety device mentioned, which is already used in Europe, is an audio beeping alarm that’s activated when a vehicle approaches critical roadway 58 • September 2021 | Towman.com

Deal with passengers by putting them in a safe place. This keeps passengers from

distracting the tow operator while working in the kill zone. situations. It’s similar to the alert technology employed in the US by Waze and Haas Alert. With the Haas Safety Cloud, drivers receive realtime digital alerts to slow down and move over. They provide drivers with a 30-second warning in advance via apps, navigation systems, or mobile devices which is claimed to reduce the risk of a collision by up to 90 percent. With regard to visibility, overuse of emergency lighting is also a problem. It can cause a tower to get washed-out in bright lights and/or blind other drivers approaching a disabled vehicle. Another AT writer, John Borowski, demonstrated a new blue safety light called Ace Alert that can be

elevated 10 feet on a riser so it can be spotted by approaching drivers at a much greater distance. Borowski pointed out that a blue light is normally allowed only on police vehicles and cannot be mounted on tow trucks. But this new product is a separate, weatherresistant setup not attached to the truck and can be powered by a tower’s battery jump pack for at least 12 hours. As for the tow operators themselves, always wearing highly reflective PPE (Personal Protection Equipment) with a Class III vest is a high priority. “A driver should have PPE on before getting to scene and not exit the tow/service vehicle without wearing PPE,” notes