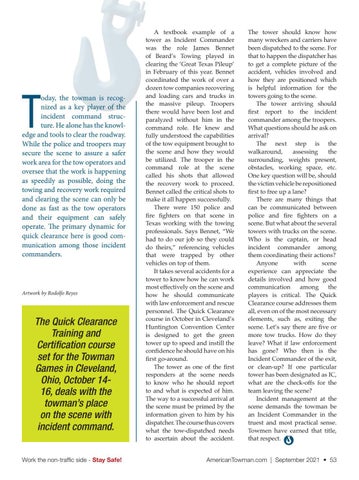 oday, the towman is recognized as a key player of the incident command structure. He alone has the knowledge and tools to clear the roadway. While the police and troopers may secure the scene to assure a safer work area for the tow operators and oversee that the work is happening as speedily as possible, doing the towing and recovery work required and clearing the scene can only be done as fast as the tow operators and their equipment can safely operate. The primary dynamic for quick clearance here is good communication among those incident commanders.

The Quick Clearance Training and Certification course set for the Towman Games in Cleveland, Ohio, October 1416, deals with the towman’s place on the scene with incident command. Work the non-traffic side - Stay Safe!

A textbook example of a tower as Incident Commander was the role James Bennet of Beard’s Towing played in clearing the ‘Great Texas Pileup’ in February of this year. Bennet coordinated the work of over a dozen tow companies recovering and loading cars and trucks in the massive pileup. Troopers there would have been lost and paralyzed without him in the command role. He knew and fully understood the capabilities of the tow equipment brought to the scene and how they would be utilized. The trooper in the command role at the scene called his shots that allowed the recovery work to proceed. Bennet called the critical shots to make it all happen successfully. There were 150 police and fire fighters on that scene in Texas working with the towing professionals. Says Bennet, “We had to do our job so they could do theirs,” referencing vehicles that were trapped by other vehicles on top of them. It takes several accidents for a tower to know how he can work most effectively on the scene and how he should communicate with law enforcement and rescue personnel. The Quick Clearance course in October in Cleveland’s Huntington Convention Center is designed to get the green tower up to speed and instill the confidence he should have on his first go-around. The tower as one of the first responders at the scene needs to know who he should report to and what is expected of him. The way to a successful arrival at the scene must be primed by the information given to him by his dispatcher. The course thus covers what the tow-dispatched needs to ascertain about the accident.

The tower should know how many wreckers and carriers have been dispatched to the scene. For that to happen the dispatcher has to get a complete picture of the accident, vehicles involved and how they are positioned which is helpful information for the towers going to the scene. The tower arriving should first report to the incident commander among the troopers. What questions should he ask on arrival? The next step is the walkaround, assessing the surrounding, weights present, obstacles, working space, etc. One key question will be, should the victim vehicle be repositioned first to free up a lane? There are many things that can be communicated between police and fire fighters on a scene. But what about the several towers with trucks on the scene. Who is the captain, or head incident commander among them coordinating their actions? Anyone with scene experience can appreciate the details involved and how good communication among the players is critical. The Quick Clearance course addresses them all, even on of the most necessary elements, such as, exiting the scene. Let’s say there are five or more tow trucks. How do they leave? What if law enforcement has gone? Who then is the Incident Commander of the exit, or clean-up? If one particular tower has been designated as IC, what are the check-offs for the team leaving the scene? Incident management at the scene demands the towman be an Incident Commander in the truest and most practical sense. Towmen have earned that title, that respect.