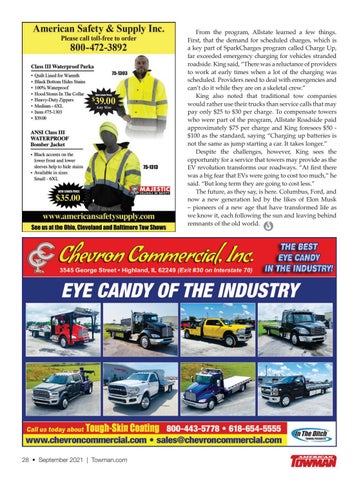 From the program, Allstate learned a few things. First, that the demand for scheduled charges, which is a key part of SparkCharges program called Charge Up, far exceeded emergency charging for vehicles stranded roadside. King said, “There was a reluctance of providers to work at early times when a lot of the charging was scheduled. Providers need to deal with emergencies and can’t do it while they are on a skeletal crew.” King also noted that traditional tow companies would rather use their trucks than service calls that may pay only $25 to $30 per charge. To compensate towers who were part of the program, Allstate Roadside paid approximately $75 per charge and King foresees $50 $100 as the standard, saying “Charging up batteries is not the same as jump starting a car. It takes longer.” Despite the challenges, however, King sees the opportunity for a service that towers may provide as the EV revolution transforms our roadways. “At first there was a big fear that EVs were going to cost too much,” he said. “But long term they are going to cost less.” The future, as they say, is here. Columbus, Ford, and now a new generation led by the likes of Elon Musk – pioneers of a new age that have transformed life as we know it, each following the sun and leaving behind remnants of the old world.