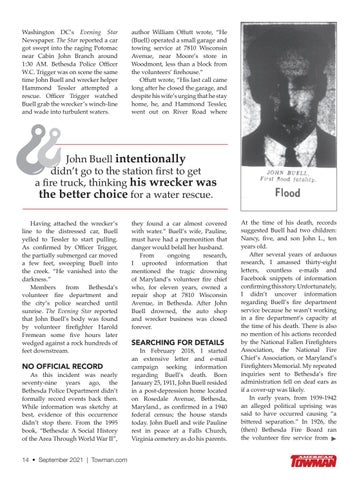 author William Offutt wrote, “He (Buell) operated a small garage and towing service at 7810 Wisconsin Avenue, near Moore’s store in Woodmont, less than a block from the volunteers’ firehouse.” Offutt wrote, “His last call came long after he closed the garage, and despite his wife’s urging that he stay home, he, and Hammond Tessler, went out on River Road where

John Buell intentionally didn’t go to the station first to get a fire truck, thinking his wrecker was the better choice for a water rescue. Having attached the wrecker’s line to the distressed car, Buell yelled to Tessler to start pulling. As confirmed by Officer Trigger, the partially submerged car moved a few feet, sweeping Buell into the creek. “He vanished into the darkness.” Members from Bethesda’s volunteer fire department and the city’s police searched until sunrise. The Evening Star reported that John Buell’s body was found by volunteer firefighter Harold Fremean some five hours later wedged against a rock hundreds of feet downstream.

As this incident was nearly seventy-nine years ago, the Bethesda Police Department didn’t formally record events back then. While information was sketchy at best, evidence of this occurrence didn’t stop there. From the 1995 book, “Bethesda: A Social History of the Area Through World War II”, 14 • September 2021 | Towman.com

they found a car almost covered with water.” Buell’s wife, Pauline, must have had a premonition that danger would befall her husband. From ongoing research, I uprooted information that mentioned the tragic drowning of Maryland’s volunteer fire chief who, for eleven years, owned a repair shop at 7810 Wisconsin Avenue, in Bethesda. After John Buell drowned, the auto shop and wrecker business was closed forever.

In February 2018, I started an extensive letter and e-mail campaign seeking information regarding Buell’s death. Born January 25, 1911, John Buell resided in a post-depression home located on Rosedale Avenue, Bethesda, Maryland., as confirmed in a 1940 federal census; the house stands today. John Buell and wife Pauline rest in peace at a Falls Church, Virginia cemetery as do his parents.

At the time of his death, records suggested Buell had two children: Nancy, five, and son John L., ten years old. After several years of arduous research, I amassed thirty-eight letters, countless e-mails and Facebook snippets of information confirming this story. Unfortunately, I didn’t uncover information regarding Buell’s fire department service because he wasn’t working in a fire department’s capacity at the time of his death. There is also no mention of his actions recorded by the National Fallen Firefighters Association, the National Fire Chief’s Association, or Maryland’s Firefighters Memorial. My repeated inquiries sent to Bethesda’s fire administration fell on deaf ears as if a cover-up was likely. In early years, from 1939-1942 an alleged political uprising was said to have occurred causing “a bittered separation.” In 1926, the (then) Bethesda Fire Board ran the volunteer fire service from