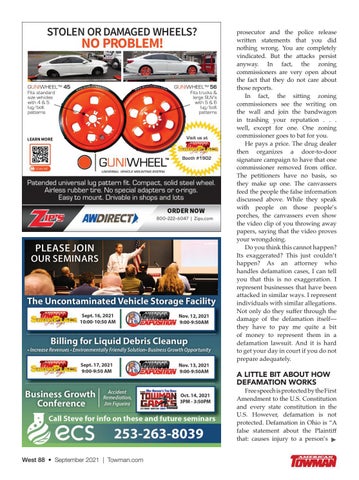 prosecutor and the police release written statements that you did nothing wrong. You are completely vindicated. But the attacks persist anyway. In fact, the zoning commissioners are very open about the fact that they do not care about those reports. In fact, the sitting zoning commissioners see the writing on the wall and join the bandwagon in trashing your reputation . . . well, except for one. One zoning commissioner goes to bat for you. He pays a price. The drug dealer then organizes a door-to-door signature campaign to have that one commissioner removed from office. The petitioners have no basis, so they make up one. The canvassers feed the people the false information discussed above. While they speak with people on those people’s porches, the canvassers even show the video clip of you throwing away papers, saying that the video proves your wrongdoing. Do you think this cannot happen? Its exaggerated? This just couldn’t happen? As an attorney who handles defamation cases, I can tell you that this is no exaggeration. I represent businesses that have been attacked in similar ways. I represent individuals with similar allegations. Not only do they suffer through the damage of the defamation itself— they have to pay me quite a bit of money to represent them in a defamation lawsuit. And it is hard to get your day in court if you do not prepare adequately.

A LITTLE BIT ABOUT HOW DEFAMATION WORKS

Free speech is protected by the First Amendment to the U.S. Constitution and every state constitution in the U.S. However, defamation is not protected. Defamation in Ohio is “A false statement about the Plaintiff that: causes injury to a person’s