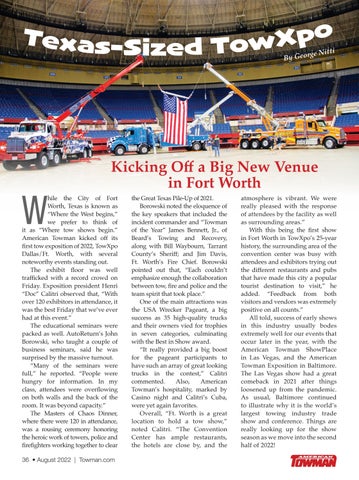 Kicking Off a Big New Venue in Fort Worth

hile the City of Fort Worth, Texas is known as “Where the West begins,” we prefer to think of it as “Where tow shows begin.” American Towman kicked off its first tow exposition of 2022, TowXpo Dallas/Ft. Worth, with several noteworthy events standing out. The exhibit floor was well trafficked with a record crowd on Friday. Exposition president Henri “Doc” Calitri observed that, “With over 120 exhibitors in attendance, it was the best Friday that we’ve ever had at this event.” The educational seminars were packed as well. AutoReturn’s John Borowski, who taught a couple of business seminars, said he was surprised by the massive turnout. “Many of the seminars were full,” he reported. “People were hungry for information. In my class, attendees were overflowing on both walls and the back of the room. It was beyond capacity.” The Masters of Chaos Dinner, where there were 120 in attendance, was a rousing ceremony honoring the heroic work of towers, police and firefighters working together to clear

the Great Texas Pile-Up of 2021. Borowski noted the eloquence of the key speakers that included the incident commander and “Towman of the Year” James Bennett, Jr., of Beard’s Towing and Recovery, along with Bill Waybourn, Tarrant County’s Sheriff; and Jim Davis, Ft. Worth’s Fire Chief. Borowski pointed out that, “Each couldn’t emphasize enough the collaboration between tow, fire and police and the team spirit that took place.” One of the main attractions was the USA Wrecker Pageant, a big success as 35 high-quality trucks and their owners vied for trophies in seven categories, culminating with the Best in Show award. “It really provided a big boost for the pageant participants to have such an array of great looking trucks in the contest,” Calitri commented. Also, American Towman’s hospitality, marked by Casino night and Calitri’s Cuba, were yet again favorites. Overall, “Ft. Worth is a great location to hold a tow show,” noted Calitri. “The Convention Center has ample restaurants, the hotels are close by, and the

atmosphere is vibrant. We were really pleased with the response of attendees by the facility as well as surrounding areas.” With this being the first show in Fort Worth in TowXpo’s 25-year history, the surrounding area of the convention center was busy with attendees and exhibitors trying out the different restaurants and pubs that have made this city a popular tourist destination to visit,” he added. “Feedback from both visitors and vendors was extremely positive on all counts.” All told, success of early shows in this industry usually bodes extremely well for our events that occur later in the year, with the American Towman ShowPlace in Las Vegas, and the American Towman Exposition in Baltimore. The Las Vegas show had a great comeback in 2021 after things loosened up from the pandemic. As usual, Baltimore continued to illustrate why it is the world’s largest towing industry trade show and conference. Things are really looking up for the show season as we move into the second half of 2022!