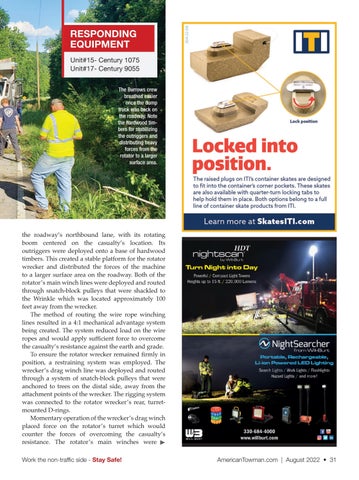 RESPONDING EQUIPMENT Unit#15- Century 1075 Unit#17- Century 9055 The Burrows crew breathed easier once the dump truck was back on the roadway. Note the hardwood timbers for stabilizing the outriggers and distributing heavy forces from the rotator to a larger surface area.

the roadway’s northbound lane, with its rotating boom centered on the casualty’s location. Its outriggers were deployed onto a base of hardwood timbers. This created a stable platform for the rotator wrecker and distributed the forces of the machine to a larger surface area on the roadway. Both of the rotator’s main winch lines were deployed and routed through snatch-block pulleys that were shackled to the Wrinkle which was located approximately 100 feet away from the wrecker. The method of routing the wire rope winching lines resulted in a 4:1 mechanical advantage system being created. The system reduced load on the wire ropes and would apply sufficient force to overcome the casualty’s resistance against the earth and grade. To ensure the rotator wrecker remained firmly in position, a restraining system was employed. The wrecker’s drag winch line was deployed and routed through a system of snatch-block pulleys that were anchored to trees on the distal side, away from the attachment points of the wrecker. The rigging system was connected to the rotator wrecker’s rear, turretmounted D-rings. Momentary operation of the wrecker’s drag winch placed force on the rotator’s turret which would counter the forces of overcoming the casualty’s resistance. The rotator’s main winches were