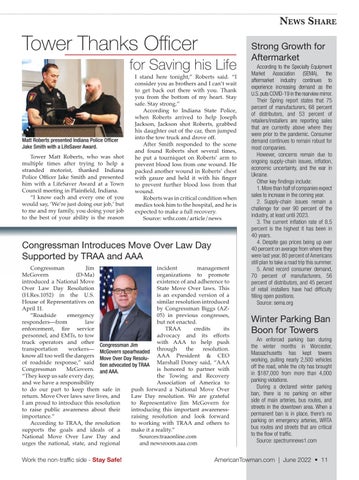 for Saving his Life

Matt Roberts presented Indiana Police Officer Jake Smith with a LifeSaver Award. Tower Matt Roberts, who was shot multiple times after trying to help a stranded motorist, thanked Indiana Police Officer Jake Smith and presented him with a LifeSaver Award at a Town Council meeting in Plainfield, Indiana. “I know each and every one of you would say, ‘We’re just doing our job,’ but to me and my family, you doing your job to the best of your ability is the reason

I stand here tonight,” Roberts said. “I consider you as brothers and I can’t wait to get back out there with you. Thank you from the bottom of my heart. Stay safe. Stay strong.” According to Indiana State Police, when Roberts arrived to help Joseph Jackson, Jackson shot Roberts, grabbed his daughter out of the car, then jumped into the tow truck and drove off. After Smith responded to the scene and found Roberts shot several times, he put a tourniquet on Roberts’ arm to prevent blood loss from one wound. He packed another wound in Roberts’ chest with gauze and held it with his finger to prevent further blood loss from that wound. Roberts was in critical condition when medics took him to the hospital, and he is expected to make a full recovery. Source: wthr.com/article/news

incident management Congressman Jim organizations to promote McGovern (D-Ma) existence of and adherence to introduced a National Move State Move Over laws. This Over Law Day Resolution is an expanded version of a (H.Res.1052) in the U.S. similar resolution introduced House of Representatives on by Congressman Biggs (AZApril 11. 05) in previous congresses, “Roadside emergency responders—from law but not enacted. enforcement, fire service TRAA credits its personnel, and EMTs, to tow advocacy and its efforts truck operators and other with AAA to help push Congressman Jim transportation workers— McGovern spearheaded through the resolution. know all too well the dangers Move Over Day Resolu- AAA President &amp; CEO of roadside response,” said tion advocated by TRAA Marshall Doney said, “AAA Congressman McGovern. and AAA. is honored to partner with “They keep us safe every day, the Towing and Recovery and we have a responsibility Association of America to to do our part to keep them safe in push forward a National Move Over return. Move Over laws save lives, and Law Day resolution. We are grateful I am proud to introduce this resolution to Representative Jim McGovern for to raise public awareness about their introducing this important awarenessraising resolution and look forward importance.” to working with TRAA and others to According to TRAA, the resolution supports the goals and ideals of a make it a reality.” National Move Over Law Day and Sources:traaonline.com urges the national, state, and regional and newsroom.aaa.com

According to the Specialty Equipment Market Association (SEMA), the aftermarket industry continues to experience increasing demand as the U.S. puts COVID-19 in the rearview mirror. Their Spring report states that 75 percent of manufacturers, 68 percent of distributors, and 53 percent of retailers/installers are reporting sales that are currently above where they were prior to the pandemic. Consumer demand continues to remain robust for most companies. However, concerns remain due to ongoing supply-chain issues, inflation, economic uncertainty, and the war in Ukraine. Other key findings include: 1. More than half of companies expect sales to increase in the coming year. 2. Supply-chain issues remain a challenge for over 90 percent of the industry, at least until 2023. 3. The current inflation rate of 8.5 percent is the highest it has been in 40 years. 4. Despite gas prices being up over 40 percent on average from where they were last year, 80 percent of Americans still plan to take a road trip this summer. 5. Amid record consumer demand, 70 percent of manufacturers, 56 percent of distributors, and 45 percent of retail installers have had difficulty filling open positions. Source: sema.org

An enforced parking ban during the winter months in Worcester, Massachusetts has kept towers working, pulling nearly 2,500 vehicles off the road, while the city has brought in $187,000 from more than 4,000 parking violations. During a declared winter parking ban, there is no parking on either side of main arteries, bus routes, and streets in the downtown area. When a permanent ban is in place, there’s no parking on emergency arteries, WRTA bus routes and streets that are critical to the flow of traffic. Source: spectrumnews1.com