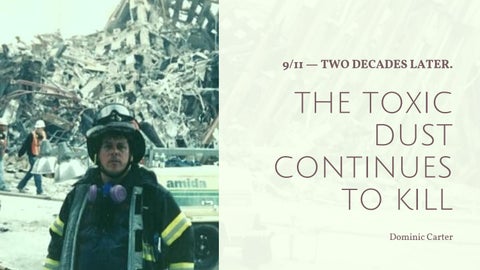 America lost 412 First Responders on 9/11. Adding insult to a nearly impossible situation, those that are just getting diagnosed with cancer, not just irst responders but anyone with a 9/11 claim going forward…. will not only get 50 percent LESS from the nearly inancial-broke Victims Compensation Board….but now up to a 70 percent reduction. At irst, a young woman named Bridget Gormley was looking stoic at me. Minutes later, you could sense she was getting emotional discussing her FDNY father, William Gormley of Engine 310/Ladder 174 in East Flatbush Brooklyn who is now deceased. Fire ighter Gormley spent months working at Ground Zero. He died at the age of 53, of 9/11-related bladder and lung cancer.

The initial 9/11 attacks didn’t kill Fire ighter Gormley, but the cancer from the 9/11 air did. Years Later

“So my father, he responded on 911, shortly a ter the collapse, and then he was diagnosed with bladder cancer in Dec of 2017, and then he passed away the following year in June, so six months. From Diagnosis to death.” — Bridget Gormley

People are becoming ill, all these years later…. A young man, Robert Tilearcio also spoke to me, sitting next to Bridget Gormley. His father, Robert Tilearcio was stationed at Engine 266 in Far Rockaway, Queens. Firefighter Tilearcio worked 24-hour shifts for at least a month at Ground Zero. The families call it CANCER on Steroids. For 911 first responders…or people that were just there….also breathing the air. You can hear the full interviews we did with Robert Tilearcio and Bridget Gormley by clicking here. Robert puts the situation in perspective:

“I wanted to leave certain things to my family. I hope that I don’t have to end up selling my house.” Retired NYPD Lt. John McArdle

On an emotional level, the accounts from the young people were tough to listen to, but then I met NYPD Lt. John McArdle. McArdle has given to others his entire career. McArdle worked for 24 years with Emergency Services of the NYPD and was just days from his retirement.. But he refused to stay home that day back in 2001. McArdle was diagnosed with stage four prostate cancer in 2014. McArdle also spent years working with the NY Task Force 1 of FEMA… and handled the bombing in Oklahoma City and numerous hurricanes. His pending Victims Compensation Fund claim will will likely be half of what was once o fered to sick irst responders and survivors. Along with the cancer, McArdle has su fered from numerous 9/11 related illnesses.

A ight to help the victims Attorney Michael Barasch has been standing up for 9/11 victims for years. To understand what is going on, one has to understand the politics of the situation. “This was non partisan toxic dust. So it shouldn’t matter whether your a republican or a democrat. but it seems to matter. for some reason we’re having trouble getting republicans who live outside of the New York area, who represents constitutes outside of New York to support the extension, and the full funding that we need, and that’s why we keep going to Washington, we’re going to make this happen, but we’re got to convince another 8–10 republican senators to get on board&quot; - Michael Barasch

“By the end of next month Dominic, we will have lost more responders as a result of the toxic dust, and the illnesses that it caused, then we lost on 9/11… Think about that.”- Attorney Michael Barasch Adding insult to a nearly impossible situation, those that are just getting diagnosed with cancer, not just first responders but anyone with a 9/11 claim going forward…. will not only get 50 percent LESS from the nearly financial-broke Victims Compensation Board….but now up to a 70 percent reduction. 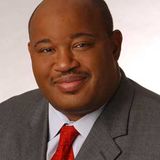