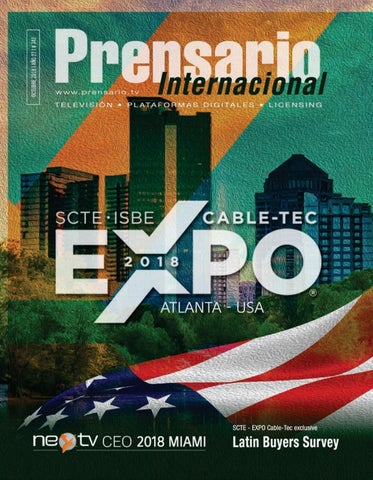 SCTE 2018: Connectivity is the Name of the Game As it happened last month at IBC in

attending SCTE in Atlanta this year will have

Netflix seems to be

to seek answers to a number of questions

the leader, and social

that have been arising in the recent past,

plus try to find the way to solve the question

about the future of broadcasting in a densely

connected world where they may become just

more slots in a programming guide, instead

to lead the region

of influencers, as they were in the past.

in this field, is still

In addition, at most Latin American

switching to digital on

countries there is a noticeable delay in

by city, and finding

delays in the necessary work towards these

huge hurdles due to

goals is noticeable in most places. However,

smartphone possession are growing at strong

rates; in Brazil, 80% of the population is

currently estimated to own a smartphone.

but is also mired in

The opening of Cable Tec SCTE 2017, with the cheerleaders of the Denver Broncos

So far, Mexico is the only nation to have

implemented a full conversion to digital

television. And it has been a process that

in 2016 resulted in —according to official

among a total of about 35 million, without

in approach between the players that have,

service. Though a new national network —

parts of the country. The goal is to connect as

Imagen Television— has been established and

many places in the interior of the country to

additional frequencies have been auctioned

Uruguay, a small country, has already

a backbone fiberoptics network, with private

parties supposed to build connections to

City and added a few new channels to the three

urban centers close to it.

traditional outlets; but, the new broadcasters

On the other hand, the telcos have been

have been so far unable to find an additional

allowed to deliver television next year, after

a time period when they have been allowed

to offer VOD programming but not linear

Argentina expects to move to digital in

television. The move has been objected

a couple of years but there is little official

by some 700 independent cable operators

action in this direction, aside from adding,

in diverse cities, that are already facing

as in Uruguay, a few new channels that are

telephony cooperatives that can offer video

programming at low cost because their

infrastructure investment has been covered

by voice and data services.

nationwide penetration) and its audiences

Another development has been the

ratings are low compared to the incumbent

decision to allow the merger of telco Telecom

Argentina with the Cablevisión cable assets

which also controls Channel 13 in Buenos

infrastructure has apparently been put on the

Aires and several outlets in the interior of

back burner by the new government that took

the country. This has met opposition from

office in 2016 and decided to focus its financial

efforts on a nationwide broadband network

Móvil, an issue could well reach the courts.

SCTE 2018: Connectivity is the Name of the Game Audience migration As in most parts of the world, young audiences are migrating from linear television to online programming options, among them Netflix and other SVOD providers. Facing this problem, the broadcasters have started multiscreen efforts in order to retain at least part of these audiences; several outlets offer online versions of their scripted programming that can be downloaded at any time and in certain cases are able to carry advertising and deliver an additional revenue.

The most powerful broadcasters, among

them Televisa in Mexico and Globo in Brazil,

are now offering streaming options to the

audiences, but their effect is not solving the

audiences migrating to SVOD and videogame

migration to digital platforms. Therefore, the

The problem with digital is compounded by

the fact that, as French expert Bruno Patino

executives attending SCTE this year will be

recently stated at a master class in Buenos

alert to any sign of how this problem is being

confronted in other parts of the world and

what software and hardware vendors have

models’. According to Argentine consultant

examples to their reality, a universe of mostly

to offer in terms of creating a certain degree

Enrique Carrier, 95% of pay OTT users in that

private channels fighting to retain both

of interactivity they could offer to audiences

country are subscribed to Netflix, followed by

audience and advertisers in order to remain

that no longer believe in “channels” or are

willing to wait for a certain content to be aired.

In the U.S., the answer has been

But, there is increasing competition from

concentration, with examples such as the

Amazon Prime –which gives away video

acquisition of most of Fox by Disney, which

Regarding screen definition, there has been

is expected to now give Netflix a run for its

some progress in Latin America in the past

money, or the still disputed acquisition of

year, especially due to the soccer World Cup

service, plus free shipping and other perks.

Time Warner by telco AT&amp;T, which has already

held in Russia, which spurred sales of Smart

TV sets, large screens and, to a lesser degree,

players cannot aspire to such deals: in Brazil,

UHF 4K-compatible receivers. According to

customers, and Spanish Telefónica, too, is

testing this market. This is complemented

Mexican America Móvil after the government

market to grow by 1% despite the migration

by some 300 OTT other providers within the

ruled in 2011 that programming producers

of younger audiences to digital media.

A considerable number of broadcasters

In August, at a MediamorfosisBA conference

Aside from these major issues, the Latin

already have equipment that allows them to

held in Buenos Aires with European and U.S.

American buyers are expected to focus

record 4K programming, but this technical

experts attending, it was noticeable that

again, as in the past, on the technical

enhancement has not reached so far the

consumer area, with a few tests being held

(AR), despite having been available already

storage and transmission equipment. The

during the Cup but little more.

region is increasing its output of original

model and depend mostly on subsidies,

online programming has been growing

grants and other monetary contributions

comprising coproduction with European and

at a constant pace, which is little comfort

from governments and institutions, as well

even Asian partners, an effect of increased

to terrestrial television; as an example, in

as help and support from universities.

interconnection. To this purpose, new

Buenos Aires City and its surroundings,

Of course, there is a future for television,

software and hardware technology has to

be applied, and this is the reason why Latin

connected to broadcast stations at primetime,

of speeches and panels on it and how the

American participation at SCTE is expected

to increase this year, despite economy

broadcast viewership. In nations where

turbulence at some of the countries but

pay TV penetration is lower, as Brazil, its

available in the past. Latin Americans will

supported by the strong will to be part of the

incidence in total viewership is smaller, but

have to adapt this array of information and

Around the World of IoT

Orchestration: What It is &amp; How It Can Make Service Agility Even More Agile

Technology Worth the Hype?

1:00 PM - 2:00 PM How the Customer Benefits from Artificial Intelligence and Machine Learning

L&amp;D Panel: Future of Technical Training/Education and You

Growing collaboration between SCTE-ISBE and Latin America When it comes to technical training,

standards and new ideas that contribute to

Operators are partnering with SCTE•ISBE

operators’ bottom lines, SCTE•ISBE and the

for the simple reason that our training –

developed in conjunction with operators

Latin America have come a long way together

around the world– is the foundation for

in a very short time.

In just three years, the Society of Cable

and CTO and CIO at Millicom, said: ‘Having

its global arm, the International Society of

the skills of our engineering professionals in

Broadband Experts (ISBE) have gone from

response to all aspects of our Tigo operations,

testing the Latin American waters to a full-

from legacy technologies to newer advances

fledged presence in the region. During that

in mobility and cybersecurity. Investing

delivering the highest level of service and an

and certifications, has secured increased

overall great experience to our subscribers’.

Among the most visible indicators of the

and has expanded the relevance of the largest

growing partnership between SCTE•ISBE and

the Latin American cable industry has been

To-Market for New Fiber Deployments”, a

to Latin American operators, vendors and

within the expanded international presence

workshop. Led by Cristian Santana of

in Atlanta, include a first-ever

TVC, the presentation focuses on strategies

for automating designs with integrated field

closely in a variety of areas that

tools for walkouts and construction, enabling

are designed to improve workforce

focused on the LatAm region and

maintenance, and accelerate the design and

workforce professionals. Today, SCTE•ISBE and the

president, Technology and Product for

standards and training and contribute to

Liberty Latin America, as a panelist at the

the bottom-line success of the industry.

The nexus for the wide variety of

Viya’s Roberto Blewett for a learning and

continues to grow in stature across the

Technical Training/Education and You.”

The panel focuses specifically on workforce

training needs in Latin America and the

Spanish, and a roadmap to have more than

solutions that SCTE•ISBE can provide.

a score of C-level speakers as well as

the end of this year;

keynoters and panelists from beyond

SCTE•ISBE began outreach to the market via

the cable ecosystem; 48 workshops with

its relationship with ATVC, or even from 2015,

more than 100 speakers from a global cast

when SCTE•ISBE’s presence was limited

of thought leaders; pre-conference and

to a booth at the Jornadas event in Buenos

Rolando Barja – on the SCTE•ISBE Learning

Aires. While there are many individuals

and Development Committee; and

and corporations who have contributed to

Architectures, respectively; the finals of an

the growth of SCTE•ISBE’s presence, it’s

with nearly a dozen operators in the region,

Adaptive Power Challenge that is unearthing

important to single out a few – notably

including Millicom, which earlier this year

new energy management solutions for the

Rolando Barja from Cotas and the team from

became the first operator to secure an

industry; and a show floor jammed with the

that SCTE•ISBE could bring to the industry

Key accomplishments within the past three years have included:

in Learning and Development, International

sigue “mirando televisión”, ya sea a

our commercial relations with the most

relevant MSOs through HFC and satellite

services networks, we have allied with im-

portant distributors in different regions of

‘In the Argentine market, we continue to grow hand in hand with our distributor

for buildings, hotels, convention centers and

In addition, highlighted the executive,

restaurants, up to those already known

PerfectVision accompanies all these lines

with installation elements such as clamps,

ducts in line with the new demands

ments both for distribution (.500

in the cable industry and in general

cable, TAPS, Connectors) and for

insulating tape, compasses, and much more.

that embraces our slogan: If it is not right, we

Anixter in the development of pro-

‘Our portfolio of passive ele-

will do it well’, he concluded.

no es así. No es tan 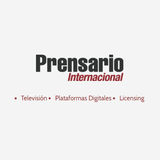