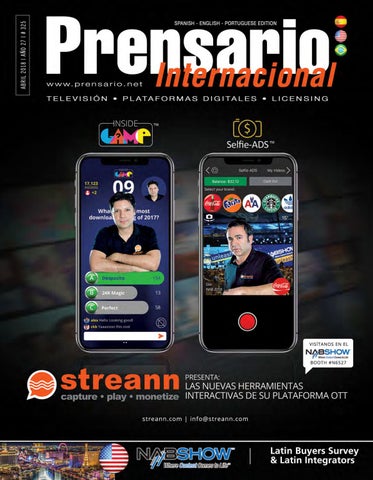 Sports, elections and DTT drive most broadcast investments in Latin America The Las Vegas 2018 NAB Show arrives with great expectations among the broadcast industry worldwide, and especially in Latin America, where the largest TV networks are seeking the best alternatives available to invest in systems upgrade, 4K production and, in some cases, even 4K transmission. Their top priority is to search for solutions that will improve the efficiency of their operations, highlighting the management of integrated and centralized systems. IP arises as the big issue, together with systems that

will secure the greatest possible automation of processes and archive management. There are three big drivers of investments

and expand media coverage of everything that surrounds the sporting event.

in May too. In this context, technology for live

among the main broadcasters in the region:

In this sense, the increasing complexity

of IP processes will allow the remote con-

trol of devices, including camcorders, title

as the use of cellular bonding at mobile

ntries, and the development of Digital

generators, audio and playout, proving an

Terrestrial Television (DTT) and the analog

Wi-fi, microwave and satellite in order to

to the increasing centralization of proces-

is back under the spotlight, but it is also the

search for new resources to convey the sig-

Investment drivers The 2018 World Cup, to be held in Russia

nal, among them the acquisition of drones

this year in Latin America will be another

to capture aerial images and many others.

for acquisition of technologies for remote

driver for investments and purchase of

technology at this NAB Show. Brazil and

delivery. In some cases it will imply testing

Mexico, the largest markets in the region,

transmission in this format, since produc-

will hold presidential elections in October

The deployment of DTT in many countries

tion in 4K has been already widely achieved.

and July, respectively, same as Colombia,

of Latin America is another big driver for

the fourth economy in the region, which

investment this year, being Mexico the only

and mainly those with the FIFA broadcasting

is having its own in May. Venezuela is

nation that has already completed its pro-

rights, have been getting ready for two years

supposed to call for elections in May, and

to be aligned with the official transmission

Paraguay is having presidential elections

to be the next, but its Government decided to postpone the switch-off date because the required minimum coverage of receivers at households hasn’t been achieved, causing a large percentage of population to lose free TV. So, 2019 is the new date, the same as in Colombia and Argentina. Brazil is advancing with the Japanese standard ISDB with certain local alterations, as agreed by its official timeline, with the

analog switch-off set for its largest cities by December 2018. The latest city ending with analog signals has been Porto Alegre,

the capital of Río Grande do Sul state. Eight million of DTT kits have been already

given away by the Government and 4.5

million will be delivered this year. In the

rest of the country, analog emissions will

been a topic of

capabilities such as mobility and portability,

forecasts its switch-off by April 2020. The

Chilean FTA networks are getting ahead of

the event, investing the upgrade of their

digitalization of all the regional capital

lable for all types of screens.

cities and achieved 80% coverage; this year

This is not new, the search for online pro-

it will continue with the rest of the country.

duction and distribution tools to strengthen

In Paraguay, the analog switch-off is

digital platforms is constantly increasing. The

expected to happen by 2020. DTT spectrum

has already been assigned to pre-existing

tools that respond to the new issues, such as

released. Bolivia, also with the Japanese-Brazilian

and many broadcasters in the region are

broadcast, with the first phase of the process

already generating most of their library by

res and Television Engineers (SMPTE) is

scheduled for November 2019 at the core

this standard. This boosts the search of pro-

good news for broadcasters worldwide. This

cities. The process will be completed by

2024 if everything happens as plan.

for capture, production and postproduction.

and description of different elemental flows

Along with this, some networks are already

investigating and searching for solutions that

Each year, the digital file management

allow them to think about broadcasting 4K.

purposes, playout and other applications for

Such is the case of Telefe, one of the main

capabilities and increasing its efficiency.

TV networks in Argentina that has unveiled

Standardization of SMPTE ST 2110 do-

its plans on this issue, which is big news

technology providers for media the tools

unifies the use of all servers.

Regarding postproduction, companies are

they need to meet these requirements while

Technical and Operations managers of TV

networks and producer companies in Latin

face traffic may be totally IP, trusting in a

this field is wide and moves toward increasing

common datacenter infrastructure instead of

ware to automate the different workflows,

and get the most of their IT-based digital

der software environments and standard IT

systems. This way, costs are slashed and

technologies, as well as virtualized servers.

The existence of a unifying standard is

Talking about television studios, the great

essential for the companies migrating their

new production, while keeping control of its

networks opening new facilities that are

is being made in interoperability tests to

Moreover, it allows collaboration among all

fitted with 100% LED beams. Their signifi-

cant energy saving, both at the illumination

and many providers are supporting this

Thus, “integration” appears as the key

and the refrigeration systems, result in cost

concept required by all the companies. To

savings that are driving companies to invest

critical providers will allow broadcasters to

improve the efficiency of their operations,

in replacement of tungsten lights.

incorporate the new IP workflows in a trans-

broadcasters are looking for video servers capable of integrate seamlessly to the preexistent production systems.

parently way. Technology managers will be

looking closely at this issue at NAB 2018 to decide whether they will fully engage in this technology or not.

A SET organiza anualmente a partici-

a National Association of Broadcasters (NAB),

no ar no nosso prime time’.

do canal brasileiro. ‘Finalizamos a nova redação do

gestão do Switch off analógico

A NAB viajan a darle seguimiento a todo

assim investimos no projeto do nosso

a 1 PTB en base a cluster Isilon;

producción, ya adjudicado a Avid,

Peer5 is the world’s largest peer-to-peer CDN for video. They deliver over 80M hours of video every month for companies like Turner, Clarin and Sony. Peer5 improves their video quality and reduce their costs by up to 80%. Unlike older solutions, this technology is WebRTC based, requires no download or special plugins and no CDN changes.

llegarán simultáneamente a la an-

GD Satcom 60cm and 1.0m ManPak®T Flyaway Antennas The General Dynamics SATCOM Technologies innovative ManPak®T product line leads the way in the next generation of Flyaway terminals. Available in 60cm and 1.0 Meter reﬂector size, this tripod antenna is lightweight and rugged, allowing for ease of transportation. CONTACT VIKING TODAY FOR PRICING. Visit www.vikingsatcom.com to see the extensive selection of VSAT products including feeds available in C, Ka, Ku and C/Ku.

dispositivos a nanosegundos de precisión a

ciones a través de un modelo “pay per use”

litator and solution provider for

TV Everywhere and OTT, tells us

about their vision of sports and

and Asia, explained: ‘We focus on a large part of our efforts to provide end-to-end solutions

aimed at solving problems in the OTT world, which allow our clients to find the best ways to monetize the experiences of their users’.

One of the greatest economic achievements of the industry is

through the user conversion rate. Among the best strategies for

attracting and monetizing them, focusing on the fans is one of

them, where we find growth opportunities thanks to the intense

use of series or sports platforms. The other is to offer live streaming

on all platforms with high-quality automatic playback, or gene-

rate a circle between experience, satisfaction and consumption to

sions and increases the recommendations towards their platform.

Mancuso: ‘We work on the evolution of this type of experience.

For example, we developed a solution that we call Live Channels for

streaming live content of external signals with a quality adaptable

to the increase in bandwidth. This allows you to gain more defi-

nition while streaming. In order for this road to bear fruit, plat-

forms must remain at the forefront, surpassing user expectations’.

DirecTV, one of the most important customers of

Toolbox, has taken advantage of the latest spor-

ting events. ‘We made our contribution from the

highlighting the authentication and user authori-

content so as to increase consumption on our platforms. To this end,

we have integrated hundreds of signals and operators to UNITY, the

leading content aggregation and distribution API that allows all types

One of Toolbox differentials is the closeness to its customers, making

a consultative sales process, advising on platforms and applications

for TVE and OTT. Its commercial team —led by Matías Lasalle— has

implemented a personalized service sales model, which has provided

a competitive advantage to the company not only in Argentina but

throughout the Latin American region.