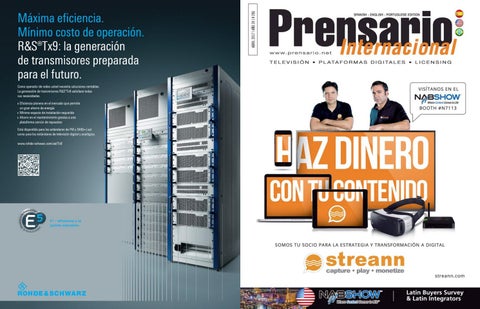 NAB 2017: Digital TV still a promise for most Latin American countries The NAB 2017 convention being held this

despite the many and frequent crises that

month in Las Vegas has evolved through

have attacked the LatAm economies, in

the control of MSO Cablevisión, the largest

its history from a rather focused dialogue

many cases resulting in restrictions to

in the country. Mr. Martinez holds 40% of

between broadcasters –both radio and

Cablevisión, which has obtained a mobile

television– in the Nineties to an endless

telephony license in addition to a longtime

variety of issues to be discussed around the

of the pay TV industry has helped reduce

wireline telephony license it could not execute

the overall impact of these downturns and

because the former government blocked it

the progress of DTH and digital platforms

the treatment of more than fifty topics often

may also be helpful in this sense. The time

not directly related to the core business of

gap between technical developments in the

the National Association of Broadcasters,

U.S. and their correlation in Latin America

While Mexico has fully migrated --with

and some twenty-two that are of essence to

has traditionally allowed the buyers of the

some consequences-- to digital television

region to avoid mistakes such as investing

signals and Brazil is slowly shifting to this

in technologies that fade away in short time,

transmission technology, --despite having

as it happened with 3D television.

once been the regional pioneer in this field--

For many of the participants, however, the main attraction is housed not in the

This year, both the Mexican and the Bra-

most Latin America remains in the analog side

Center but at the hundreds of booths where

zilian economies are facing an uncertain

of the business, with some inroads reaching

hardware and software for the different as-

future for different reasons, while Venezuela

pects of the business is being exhibited. The

remains in the deep crisis started years ago.

On the other hand, the internal operation,

Latin American attendees have been present

Colombia and Argentina appear to be on

image gathering and image storage at most

at the NAB show for decades because –as

the verge of strong investments, both in

outlets have been digitized years ago; some

it happens with IBC in Europe– because it

the digital television and broadband fields,

remains the most efficient way to become

while Chile is bracing with some tricky

The explanation to this apparent contradic-

aware of the latest developments in the in-

fundamentals. Peru is another interroga-

tion must be sought in the comparatively slow

dustry in a few –yet hectic– days. The vendor

expects their Latam clients to attend in spite

investing in its infrastructure. Paraguay and

tions within the region and the ignorance or

of the fluid relationship they may have with

Bolivia, for many years considered backyard

soft-pedaling, by many regulation bodies, of

them at their home countries; Spanish- and

markets, are closing the gap through the

the decisions needed to jumpstart the transi-

action of Millicom, an European telco that

tion. The low purchasing power of a sizable

available for demonstrations, resulting in a

is competing against powerhouses Spanish

part of the population is also to be blamed:

fulfilling experience if the meetings have been

Telefónica and Mexican América Móvil by

while broadcast television penetration is

properly scheduled. In addition, the vendor

high in most nations, more than half Latin

representatives from each country are also

as well as in Colombia. In Argentina, Mexi-

American households claim they lack the

briefed on the strategies of the company,

can entrepreneur David Martinez has seized

money to purchase the flat screen sets that

and are able to watch by themselves the

would make a difference when watching their

innovations, at no extra cost to the exhibitor.

to be planning to give its competitors a ride

These practices have allowed the NAB

for their money, perhaps in connection with

Politics often interfere with the process: in

show to remain a must-visit convention

in office in 2012, decided it would give away

some of the players, a move recently followed

TV sets instead of decoders to the families

All in all, the process is being less traumatic

by Viacom in Argentina, where it acquired

than in Mexico but its development has not

Budget restraints affected the distribution of

been even close to fulfill the expectations set

some three million sets on top of the close to

in 2008, when former president Luiz Inácio

Coverage across the extensive Chilean geo-

ten million given away, resulting in a sizable

graphy has been equally tricky. The private

amount of dwellings that had to move to pay

become the leader of a region-wide process;

broadcasters have recently agreed to a joint

television or manage somehow to avoid being

though the South America nations (with the

DTH system that will help deliver their signals

switched-off. The cable industry grew by

exception of Colombia, which chose DVB)

to remote parts of the country, a move in part

more than 10% a year and Mexico is currently

forced by coverage requirements included in

the LatAm country with the largest subscriber

with some alterations proposed by Brazil,

base, close to 20 million, surpassing Brazil,

the migration remains halfway and will

which has a population exceeding 210 million

probable not be completed until 2020 or so.

One of the side effects in Brazil and in

Chile is that the broadcasters in these two

networks and will see a third one arise this

year, in addition to public broadcasting and

In Argentina, the former government

from the pay television systems. A similar

several regional channels. The point in this

opened years ago a bidding process for digital

conflict arose in Colombia, but its govern-

nation is that, by design, private broadcas-

television channels but most of the spectrum

ment decreed that the cable operators and

ting and pay television systems must pay for

slots remained uncalled because there was

DTH systems in that country were enabled to

the public television system, a scheme that

no potential audience in a nation where pay

deliver the broadcast signals without paying

has resulted in a demanding tax structure

TV reaches about 85% of the population.

a fee. Since about 75% of watching time pay

that is different from what Internet-related

The same administration also developed a

activities (including IPTV) must deal with.

The number of commercial networks results

subscribers are unhappy when they have to

from studies commissioned by the regulators,

that reached 8% of the total of households,

switch from cable to an aerial antenna, for

concerning the advertising market. Another

in most cases low-income individuals that

instance, even when the process is not that

consequence is that there are several hun-

dred “community cable systems” which are

supposedly non-profit (in practice this is not

necessarily true) but are allowed to carry up

future, but it appears that efforts are more

Chile is another country mired in dilemmas

focused now on the expansion of Internet

about the implementation of digital TV. As

explained in former reports, the nation has

of the territory, than on expanding by a few

a Law that tried to solve an array of aspects

The counterpart to this conundrum is that

instead of focusing on a technical migration.

Colombia is currently one of the most active

This has caused a series of debates that de-

layed the enactment of the law during six

the Hispanic US market. The fact that the

years and still are a matter of interpretation

Colombian version of how the Spanish lan-

Brazil In Brazil, the government is currently

and lawsuits. In addition to this, the local

guage is spoken is widely accepted throughout

broadcast industry is highly dependent on

the region has also helped; all in all, this has

advertising revenues, and these revenues are

in that nation, after reaching close to 90%

particularly volatile according to the rating

reach for digital signals. The telcos are

figures obtained by each of the three major

and software in order to remain competitive

eager to occupy the spectrum blocks they

with what is turned out in Mexico and the

purchased years ago, but it seems that to-

broadcaster TVN, which must as well obtain

States, while Brazil struggles with the lan-

tal spectrum availability is not around the

a sizable part of its budget from ad sales.

guage problem (Portuguese is spoken there)

corner; the government has been providing

A collateral effect is that foreign investors,

and Argentina has fallen into a distant third

among them pay TV powerhouses Turner and

place due to a rise in costs related to internal

and satellite-delivered analog signals will

inflation and other reasons.

from a web brand about celebrities into a

Video Platforms of the Future

from young and established media entities

Hear from experts at the forefront of

to discuss the next frontier of video con-

adcasting takes off around the world. The

session will include leaders from various

sectors of the TV ecosystem, presenting

Celebrity Executive Officers: How These CEOs

their recommendations on managing tran-

sition to the next generation of audio and

Listen in on an interview with entre-

preneurs and corporate CEOs who have

transitioned their business successes into

hit television series. Has their celebrity

stature helped or hindered their corporate

10:30a m to 11:30 am Reaching for the Stars: Connecting to the Future with NASA and Hollywood

A panel discussion between astronauts, filmmakers, and technology leaders takes

2:00 pm to 3:00 pm Content at the Center of Media Transformation

you behind the scenes of the advanced

Consumers are driving changes to the

space research, create the foundation for

space commerce, and ignite our imagina-

tion about the future.

have the potential to transform image

conversational economy are colliding to

The Force Returns: “Rogue One: A Star Wars

Making It In the Major Leagues: How A Viral Video on Funny Or Die Became the IFC Series

Learn how ILM and Skywalker Sound

“The Man In The High Castle”

balanced the new with the classic through

and Star of IFC’s Brockmire, with co-star

such technical innovations as virtual pro-

Caserta as they discuss the making of the

an innovative production pipeline and

pector Kido), will discuss the production of

more. See some great behind the scenes

“The Man In The High Castle,” what made

footage and glimpse how sound and visual

it such a success and OTT series changing

effects worked together to produce another

The Real Story: A Take on Syndicated Enter-

zon Prime Video’s The Man In The High

Video’s The Man In The High Castle.

Get the real story behind the FOX TV/TMZ

possibilitada com a entrada do sistema’.

a evolução a IP.

integraciones sólo a base de led.

explorar as possibilidades de negócios do

sentamos as principais marcas no mercado

teriores para proveer a clientes ya existentes, pero ya no quieren

alcanzar a nuestra base de clientes’.

Manager for AdsEdge, que permite a