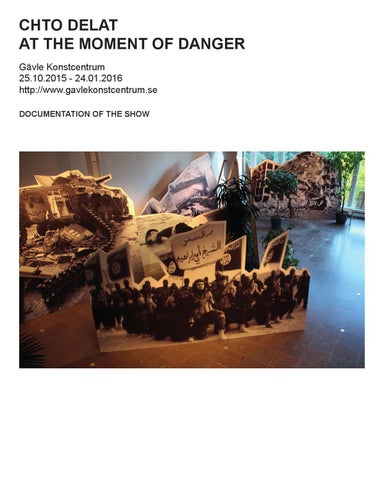 The show consists of 3 installations:

The Garden of Catastrophes

(cut-outs, MDF plates with black-white prints, the trees in the pots, garden benches)

The Excluded in the Moment of Danger (4 channel video installation)

This exhibition realized by collective Chto Delat is a first solo show in Sweden and its composition specially conceived for Gävle Konstcentrum and based on the previous solo project at Seccesion, Vienna and KOW Berlin. The show reflects what art could be at the moment when all our familiar situation of politics and everyday starts to fall apart. The events of recent year have lodged all the artists and creative workers from Russia into completely new reality with a new cold war atmosphere, exaltation of the search for enemies, the tightening repression of dissent in all forms, and direct military confrontation with Ukraine which left thousands of dead bodies on both sides. We feel affected by general atmosphere of the fear – Russia is afraid of the West. West is afraid of Russia. Looks like that everywhere people are living in anticipation of new catastrophes and stop to trust and build a better future being black-mailed with the misery of existing status quo which pretends to be the only way to escape a bigger disaster. In many places the fear of civil war is getting closer. We do not know if we still have a hope for the future or it is gone. This is the main issues in the recent video installation “The excluded. At the moment of danger” which is a core element of the show. The video projections are getting out of black box and continues in a new version of sculptural installation made from cut out images of different catastrophes taken from internet. These are events which has happened recently in many places around the globe – like Ukraine, Gaza, Syria, Ruanda and so on. The images are mixed up with different indoor trees in pots which creates a recognizable cozy feeling of being at home and thus prologues the outside peaceful garden into the gallery space. We try to create a situation when catastrophes are mingling into the peaceful everyday of Gävle and thus creating the disturbing feeling which we hope are able to deliver to the public a complex picture of the totality of the current state of the world.

The ruined Soviet monument after the battles at East Ukraine, august 2014 https://en.wikipedia.org/wiki/Battle_in_Shakhtarsk_Raion#Savur-Mohyla

The doctors volunteers are walking through Maidan square in Kiev, March 2014 http://www.jean-sam.com/les-plus-belles-photos-de-kiev-en-ukraine-via-twitter/

How ISIS is promoting itself and gaining popular support on the ground March 17, 2015 / leave a comment https://redrosyfuture.wordpress.com/2015/03/

The lifeless body of Aylan Kurdi, three, lies in the sand on a beach in Bodrum, Turkey. Aylan, his five-year-old brother Galip and their mother Rehan drowned trying to reach Greece. worldfriday 4 September 2015 - 8:49am https://www.enca.com/world/stop-boats-stop-deaths-sea%E2%80%93-abbot-defends-australias-hardline-policies

The new installation piece which is placed at the end of the show and face the window is realized as a comment to current situation (October 2015) when Sweden faced enormous number of refuges. Like elsewhere in Europe this situation provoke a heated debate with often polar opinions. For our piece we collected the most positive, welcoming position of citizens and media at that moment. At the same time being combined together with elegant design of IKEA rags (IKEA is emblematic Swedish company) and the Garden of Catastrophes it creates a bit disturbing effect on the viewer which we want to stimulate. At the end of the show we have received a more frightening news telling us that Sweden decided to close its border and looks like the whole new period of history just starts.

Chto Delat. At the moment of danger

Chto Delat. At the moment of danger