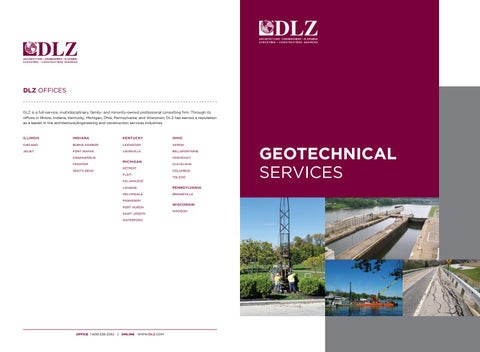 DLZ is a full-service, multidisciplinary, family- and minority-owned professional consulting firm. Through its offices in Illinois, Indiana, Kentucky, Michigan, Ohio, Pennsylvania, and Wisconsin, DLZ has earned a reputation as a leader in the architecture/engineering and construction services industries.

With a staff of more than 700 employees located in 26 offices, DLZ is consistently ranked as one of Engineering News-Record’s prestigious Top 150 Design Firms in the United States. A family- and minority-owned, full-service firm, DLZ’s vision is simple: Create successful partnerships with our clients that facilitate trust, commitment, and communication. DLZ provides a wide range of geotechnical and materials engineering services, including drilling and subsurface sampling, laboratory testing of soils and materials, and construction monitoring and testing. DLZ’s geotechnical engineers bring experience ranging from foundation evaluations to dewatering analyses to complex soil-structure interaction analyses. DLZ’s materials testing laboratory is AASHTO-certified and U.S. Army Corps of Engineers validated.

The project included a subsurface investigation, laboratory testing of the bedrock, design of rock cut slopes, and analysis of the rockfall mitigation measures using the Colorado Rockfall Simulation Program Software. DLZ worked with ODOT’s district geotechnical engineer to design practical and economical solutions to the rockfalls along the roadways. Due to the existing steep hillsides adjacent to the roadways, limited existing right-of-way, and the need to potentially purchase significant amounts of private property, DLZ designed hybrid slopes and catchment systems to limit the amount of rock excavation and minimize private property acquisition required to protect the roadway from rockfalls. The designs incorporated steeper than typical rock cuts, with shallow catchment, and incorporated concrete barriers where necessary to achieve greater than 95% retention of the anticipated rock falls.

NORTHPOINTE DRIVE (CR 723) LANDSLIDES – MUSKINGUM COUNTY, OHIO This project consisted of performing subsurface explorations and preparing detailed construction plans for the remediation of seven landslides along Northpointe Drive (CR 723). The area was characterized by refuse from past mining activities as well as weak residual soils. Due to federal grant funding restrictions on construction, DLZ was required to complete the exploration, analyses, design, and preparation of construction documents within approximately two months after notice to proceed. The construction documents were prepared within this time frame and the project was completed on time.

MAIN STREET BRIDGE REPLACEMENT – COLUMBUS, OHIO As part of this significant design project for the city of Columbus, DLZ provided subsurface exploration and geotechnical engineering services. Several replacement options were investigated with the final design being the nation’s first inclined, single-rib tied arch bridge. The subsurface investigation consisted of borings drilled to depths of up to 135 feet, including up to 55 feet into soft shale and very hard limestone. The geotechnical

engineering for the project included foundation recommendations for the bridge as well as design and construction recommendations for the approach pavement. Complex soil-structure interaction analyses were performed in order to determine the response of the drilled shafts to large vertical and lateral loadings. The drilled shafts were designed based on an allowable end bearing value of 100 tons per square foot on the limestone bedrock.

SHE-75-5.66/6.14/6.25, ODOT DISTRICT 7 – SHELBY COUNTY, OHIO This project includes the rehabilitation or replacement of three pairs of bridges along with improvement to the pavement approaches. The existing bridge abutment and pier foundations are to be reused where possible. The work also includes raising the profile of the bridges and the approach pavements as well as widening the existing embankments. Much of the embankment widening will consist of special benching and sliver fill type slopes in accordance with ODOT’s Geotechnical Bulletin 2 (GB-2). In addition to the sliver fills, four retaining walls and the possible use of reinforced soil slopes (RSS) are planned. Approximately 60 borings, totaling approximately 2,600 feet of drilling, were performed for the project.

U.S. 33 BYPASS AND 10 BRIDGES, ODOT DISTRICT 5 – FAIRFIELD COUNTY, OHIO As part of the U.S. 33 Bypass around Lancaster, Ohio, DLZ performed the subsurface exploration and geotechnical engineering for 10 bridges and associated structures and approximately 4 miles of new highway. A variety of bridge foundations were recommended including special considerations where significant groundwater artesian conditions and thick layers of soft/ weak soils were encountered. Solutions included a wick drain installation program consisting of over 1,000,000 feet of wick drains, piezometers, and settlement platforms. DLZ performed construction monitoring and testing during the installation of the wick drains and subsequent consolidation/settling periods.

OLENTANGY SCIOTO INTERCEPTOR SEWER (OSIS) AUGMENTATION AND RELIEF SEWER (OARS) – COLUMBUS, OHIO The OSIS-OARS project, at $350 million, is the largest public works project in the history of the city of Columbus. As part of its full-service engineering, DLZ provided subsurface exploration and geotechnical engineering for the project. The 20-foot diameter tunnel runs for 23,300 feet and is being constructed in competent rock at a depth of 170 feet. Geotechnical engineering services included evaluation of: the general subsurface and geologic conditions and providing a geologic/geotechnical basis for design and construction; the hydrogeologic conditions within the excavations, shafts and tunnel; the potential environmental hazards within the general project corridor; and the need for and recommendations for geotechnical instrumentation prior to and during construction. 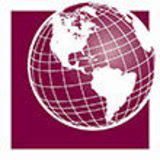