Towards a New Renaissance 6 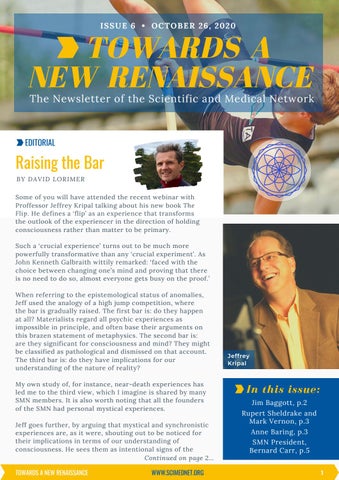 The Newsletter of the Scientific and Medical Network

Raising the Bar BY DAVID LORIMER Some of you will have attended the recent webinar with Proffessor Jeffrey Kripal talking about his new book The Flip. He defines a ‘flip’ as an experience that transforms the outlook of the experiencer in the direction of holding consciousness rather than matter to be primary. Such a ‘crucial experience’ turns out to be much more powerfully transformative than any ‘crucial experiment’. As John Kenneth Galbraith wittily remarked: ‘faced with the choice between changing one’s mind and proving that there is no need to do so, almost everyone gets busy on the proof.’ When referring to the epistemological status of anomalies, Jeff used the analogy of a high jump competition, where the bar is gradually raised. The first bar is: do they happen at all? Materialists regard all psychic experiences as impossible in principle, and often base their arguments on this brazen statement of metaphysics. The second bar is: are they significant for consciousness and mind? They might be classified as pathological and dismissed on that account. The third bar is: do they have implications for our understanding of the nature of reality? My own study of, for instance, near-death experiences has led me to the third view, which I imagine is shared by many SMN members. It is also worth noting that all the founders of the SMN had personal mystical experiences. Jeff goes further, by arguing that mystical and synchronistic experiences are, as it were, shouting out to be noticed for their implications in terms of our understanding of consciousness. He sees them as intentional signs of the Continued on page 2... TOWARDS A NEW RENAISSANCE

Dr Jim Baggott: Post-Empirical Science is an Oxymoron This stimulating and wideranging article on the Aeon platform highlights the dangers of ‘post-empirical science’ drawing on Sir Karl Popper’s falsifiability criterion and addressing the epistemological status of the multiverse. ‘In the so-called ManyWorlds interpretation of quantum mechanics, there are universes containing our parallel selves, identical to us but for their different experiences of quantum physics. These theories are attractive to some few theoretical physicists and philosophers, but there is absolutely no empirical evidence for them.’

Continued from page 1 fundamental inadequacy of our present Western worldview. Far from letting such exceptional experiences pass unnoticed, though, the scientific and academic establishment goes out of its way to ignore and suppress findings inconsistent with its basic materialist philosophy. This can be seen in its most extreme form with highly organised sceptical movements that control Wikipedia entries on parapsychology and complementary medicine to reflect their strongly held view that such ‘pseudo-scientific and ‘woo-woo’ activities are an affront to ‘reason and science’ – as if there can be a monopoly on such words. For Kripal, this materialistic framework is not wrong, but only half right, applying as it does to the outside of things and adopting a third person perspective. As Alfred Russel Wallace and Lawrence LeShan have argued, there is no such thing as an impossible fact: if your theory is inconsistent with the facts, then your theory must be modified rather than the fact set aside. It is just not good enough to say that ‘such things that happen all the time cannot happen at all.’ The stakes are high, though, relating as they do to what is considered real or unreal in terms of ultimate ontology and epistemology. In his book Communication Power, Manuel Castells defines this as the capacity to impose a specific frame that shapes human reasoning and manipulates

“For Kripal, this materialistic framework is not wrong, but only half right...” emotions in the interpretation of media messages. He reminds us that people select information according to their cognitive frames, and that the fear frame is extremely potent, as we have all experienced in recent times. In defending a conventional academic framing of synchronistic experiences, peer pressure and professional shaming tactics are widely prevalent and correspondingly intimidating to young researchers. This is where the Network can help as a safe forum for open exchange and, as a 1980s SMN document states: ‘The existence of the Network lets it be widely known that there is a strong minority amongst professional people who wish to take fully into account in spiritual capabilities that we all possess.’ WWW.SCIMEDNET.ORG

Dr Rupert Sheldrake and Dr Mark Vernon David Bohm – his life and ideas Rupert first met Bohm in 1982 soon after the publication of his book A New Science of Life precipitated a negative reaction from the militant materialists; the editor of the

Phil Roberts: ‘Confidence Comes from Crossing Thresholds’ – Kamal Ravikant leading scientific journal Nature tried to excommunicate him. Bohm had a similar experience forty years earlier with the quantum physics community. In this dialogue on Rupert’s YouTube channel, Rupert (pictured left) and Mark talk about what Bohm drew from Krishnamurti, and how the formalisms of quantum theory are influenced by psychological and spiritual perceptions. Watch it here.

Dr Anne Baring: Illustrated talk on Mary Magdalene For too many centuries Mary Magdalene has been presented in literature and art as a sinner and a ‘Penitent Whore’. After reading the work of Laurence Gardner and researching many other sources, Anne realised that naming her a ‘sinner guilty of all vices’, as Pope Gregory the Great did in AD 591 was a malicious calumny or slanderous projection onto her that has survived until the present day when it can be revealed as a deliberate attempt to vilify her. Here and in a corresponding article Anne shares her research about the ‘Apostle to the Apostles’ and her role as the beloved companion of Jesus. Watch the talk here.

This piece, from Phil’s blog on leadership, takes Ravikant’s quote as a BRIGHAM leaping-off point YOG to develop his ideas around wholeperson coaching. ‘One could say that all leadership development is soul work, involved with the fundamental question of just who it is that a leader’s followers are following, and why. The choice is how far to go with the question; how deeply to increase our self and otherawareness so that we can figure out together how to get stuff done, be it in business, in public service or even politically. Where do rites of passage and the crossing of thresholds fit with modern leadership development and the complexity and scale of the challenges facing us all?’ Read the full blog here.

This episode features a review of Hermann Hesse The Wanderer and His Shadow, a magisterial biography by Gunnar Decker. David writes: ‘I will discuss Hesse’s influence on my own life and my communication of his message to my pupils at Winchester College in the 1980s. Themes include beginnings and endings, nationalism and internationalism, and the spiritual quest as an inner journey home. Then I read a wonderful essay on the wisdom of trees in terms of stillness and endurance.’ Listen to the episode here.

Umair Haque’s work as a social and political commentator is widely featured in the Medium Daily Digests. Here he argues that we need three decades of unprecedented revolutions but wonders whether we are up to the task. These would need to address moral identity, economics, ecosystems, and the legal and political systems. It’s a tall order but it may be forced on us. Read the full article here.

Quote “I shall not commit the fashionable stupidity of regarding everything I cannot explain as a fraud.” — Carl G. Jung

Why didn&#39;t the wave-particle cross the road? Because it was already on both sides. WWW.SCIMEDNET.ORG

‘Create a Better Tomorrow’ and more...

Happy Place with Fearne Cotton is an uplifting, insightful podcast about life, love, loss, and everything in-between. In her interview with Wim Hof, known as The Ice Man, they explore how extreme cold can boost your immune system, and your physical and mental health. When talking about the three key tools of the Wim Hof Method - breathing, extreme cold and mindset - he says: ‘People say, “oh, but can it be so simple?” I’m sorry, it is so simple. Just do it.” Listen here. TOWARDS A NEW RENAISSANCE

Bernard Carr: Psychical Research and Parapsychology Jeffrey Mishlove interviews SMN President Prof Bernard Carr about his passion for psychical research, referring to several of his own BRIGHAM YOGalso experiments. Bernard reviews the history of these disciplines from his unique perspective as a physicist. Watch the full talk here.

Editor: David Lorimer Design: Andrew Polson Layout: Nikolay Petrov Disclaimer: The selections in this newsletter are personal – the Network has no consensus view on the material covered. Readers need to draw their own conclusions on the basis of evidence and reason. For all enquiries click here. Site: explore.scimednet.org

HELP US NURTURE AND GROW TANR!

JOIN THE SCIENTIFIC AND MEDICAL NETWORK... ...AND ENJOY ACCESS TO THE RECORDINGS OF ALL OUR RECENT ONLINE EVENTS The last nine months of restricted movement has produced a sharp increase in high-quality online presentations and events and the Scientific and Medical Network has been fully participating in this wave of activity. As a result we are delighted to be able to offer our members a growing number of excellent webinar recordings as a part of their full membership package. Just a few of these are below:

We are excited to bring you Towards a New Renaissance on a regular basis and the responses we have received have been brilliant. If you have been enjoying this monthly digest of David Lorimer&#39;s editorials, featured blogs, suggested videos and articles – and of course, David&#39;s ongoing ‘bookcast’ of spoken reviews, then would you consider making a supportive donation? Any amount would be a great help toward our costs of time and labour. And a regular donation – even as little as £2–£5 a month – can allow us to plan ahead with new ways to bring you great content.

Click here to choose a donation level via PayPal - and thank you!

Donate TOWARDS A NEW RENAISSANCE

Join today with an annual subscription of just £60! As well as access to all recorded webinars you’ll also receive other member benefits, such as our journal, Paradigm Explorer, posted three times a year. Be part of a community of people enquiring into the most significant scientific and spiritual questions of our age. Click below for full details.

Towards a New Renaissance 6

Newsletter of the Scientific and Medical Network