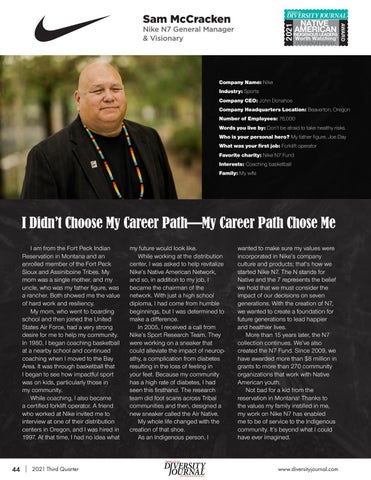 I Didn’t Choose My Career Path—My Career Path Chose Me I am from the Fort Peck Indian Reservation in Montana and an enrolled member of the Fort Peck Sioux and Assiniboine Tribes. My mom was a single mother, and my uncle, who was my father figure, was a rancher. Both showed me the value of hard work and resiliency. My mom, who went to boarding school and then joined the United States Air Force, had a very strong desire for me to help my community. In 1980, I began coaching basketball at a nearby school and continued coaching when I moved to the Bay Area. It was through basketball that I began to see how impactful sport was on kids, particularly those in my community. While coaching, I also became a certified forklift operator. A friend who worked at Nike invited me to interview at one of their distribution centers in Oregon, and I was hired in 1997. At that time, I had no idea what

my future would look like. While working at the distribution center, I was asked to help revitalize Nike’s Native American Network, and so, in addition to my job, I became the chairman of the network. With just a high school diploma, I had come from humble beginnings, but I was determined to make a difference. In 2005, I received a call from Nike’s Sport Research Team. They were working on a sneaker that could alleviate the impact of neuropathy, a complication from diabetes resulting in the loss of feeling in your feet. Because my community has a high rate of diabetes, I had seen this firsthand. The research team did foot scans across Tribal communities and then, designed a new sneaker called the Air Native. My whole life changed with the creation of that shoe. As an Indigenous person, I

wanted to make sure my values were incorporated in Nike’s company culture and products; that’s how we started Nike N7. The N stands for Native and the 7 represents the belief we hold that we must consider the impact of our decisions on seven generations. With the creation of N7, we wanted to create a foundation for future generations to lead happier and healthier lives. More than 15 years later, the N7 collection continues. We’ve also created the N7 Fund. Since 2009, we have awarded more than $8 million in grants to more than 270 community organizations that work with Native American youth. Not bad for a kid from the reservation in Montana! Thanks to the values my family instilled in me, my work on Nike N7 has enabled me to be of service to the Indigenous community. It’s beyond what I could have ever imagined.