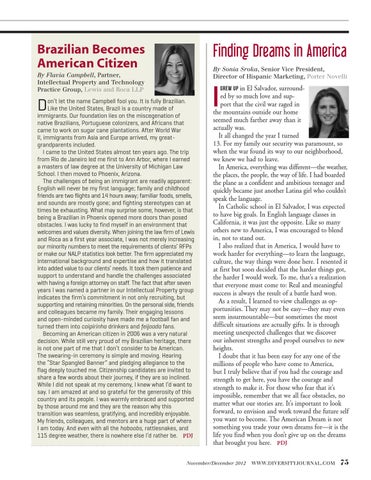 on’t let the name Campbell fool you. It is fully Brazilian. Like the United States, Brazil is a country made of immigrants. Our foundation lies on the miscegenation of native Brazilians, Portuguese colonizers, and Africans that came to work on sugar cane plantations. After World War II, immigrants from Asia and Europe arrived, my greatgrandparents included. I came to the United States almost ten years ago. The trip from Rio de Janeiro led me first to Ann Arbor, where I earned a masters of law degree at the University of Michigan Law School. I then moved to Phoenix, Arizona. The challenges of being an immigrant are readily apparent: English will never be my first language; family and childhood friends are two flights and 14 hours away; familiar foods, smells, and sounds are mostly gone; and fighting stereotypes can at times be exhausting. What may surprise some, however, is that being a Brazilian in Phoenix opened more doors than posed obstacles. I was lucky to find myself in an environment that welcomes and values diversity. When joining the law firm of Lewis and Roca as a first year associate, I was not merely increasing our minority numbers to meet the requirements of clients’ RFPs or make our NALP statistics look better. The firm appreciated my international background and expertise and how it translated into added value to our clients’ needs. It took them patience and support to understand and handle the challenges associated with having a foreign attorney on staff. The fact that after seven years I was named a partner in our Intellectual Property group indicates the firm’s commitment in not only recruiting, but supporting and retaining minorities. On the personal side, friends and colleagues became my family. Their engaging lessons and open-minded curiosity have made me a football fan and turned them into caipirinha drinkers and feijoada fans. Becoming an American citizen in 2006 was a very natural decision. While still very proud of my Brazilian heritage, there is not one part of me that I don’t consider to be American. The swearing-in ceremony is simple and moving. Hearing the “Star Spangled Banner” and pledging allegiance to the flag deeply touched me. Citizenship candidates are invited to share a few words about their journey, if they are so inclined. While I did not speak at my ceremony, I knew what I’d want to say. I am amazed at and so grateful for the generosity of this country and its people. I was warmly embraced and supported by those around me and they are the reason why this transition was seamless, gratifying, and incredibly enjoyable. My friends, colleagues, and mentors are a huge part of where I am today. And even with all the haboobs, rattlesnakes, and 115 degree weather, there is nowhere else I’d rather be. PDJ

GREW UP in El Salvador, surround-

ed by so much love and support that the civil war raged in the mountains outside our home seemed much farther away than it actually was. It all changed the year I turned 13. For my family our security was paramount, so when the war found its way to our neighborhood, we knew we had to leave. In America, everything was different—the weather, the places, the people, the way of life. I had boarded the plane as a confident and ambitious teenager and quickly became just another Latina girl who couldn’t speak the language. In Catholic school in El Salvador, I was expected to have big goals. In English language classes in California, it was just the opposite. Like so many others new to America, I was encouraged to blend in, not to stand out. I also realized that in America, I would have to work harder for everything—to learn the language, culture, the way things were done here. I resented it at first but soon decided that the harder things got, the harder I would work. To me, that’s a realization that everyone must come to: Real and meaningful success is always the result of a battle hard won. As a result, I learned to view challenges as opportunities. They may not be easy—they may even seem insurmountable—but sometimes the most difficult situations are actually gifts. It is through meeting unexpected challenges that we discover our inherent strengths and propel ourselves to new heights. I doubt that it has been easy for any one of the millions of people who have come to America, but I truly believe that if you had the courage and strength to get here, you have the courage and strength to make it. For those who fear that it’s impossible, remember that we all face obstacles, no matter what our stories are. It’s important to look forward, to envision and work toward the future self you want to become. The American Dream is not something you trade your own dreams for—it is the life you find when you don’t give up on the dreams that brought you here. PDJ